Helena Kennedy practises predominantly in the criminal law, undertaking leading work of all kinds. She also undertakes judicial review, public inquiries and sex discrimination work. She has acted in many of the prominent cases of the last decade including the Brighton Bombing Trial, Guildford Four Appeal, the bombing of the Israeli Embassy, the abduction of Baby Abbie Humphries and a number of key domestic violence cases. She is currently acting in cases connected to the recent wave of terrorism.

She is Chair of the Human Genetics Commission and a member of the World Bank Institute's External Advisory Council and was recently appointed to the board of the British Museum. She stepped down as Chair of the British Council in July 2004 after completing six years. She is a Bencher of Gray's Inn and a Member of the House of Lords, speaking on issues of human rights and civil liberties.

She is Vice-President of the Haldane Society, Vice-President of the Association of Women Barristers and a Patron of Liberty. She chaired the Commission of Inquiry into Violence in Penal Institutions for Young People for the Howard League. The Commission's report Banged Up, Beaten Up, Cutting Up was published in 1995. She chaired the Commission of Inquiry into the health, environmental and safety aspects of the Atomic Weapons Establishment at Aldermaston for Reading Borough Council, the findings published in the report Secrecy Versus Safety1994. In 2004/5, she was Chair of the Inquiry into Sudden Infant Death for the Royal Colleges of Pathologists and of Paediatrics, producing a protocol for the investigation of such deaths. She is an Honorary Fellow of the Institute of Advanced Legal Studies and a Fellow of the City and Guilds of London Institute. She is a member of the Foreign Policy Centre's Advisory Council and was the UK member of the International Bar Association's Task Force on Terrorism.

She is President of the School of Oriental and African Studies at the University of London. She is a Fellow of the Royal Society of Arts and President of the National Children's Bureau. As Commissioner on the National Commission for Education she chaired a committee on widening participation in further education and the Commission's seminal report, Learning Works, was published in 1997.

She has lectured on Human Rights, Criminal Law and many other subjects, both in Britain and internationally. She was the Rose Sheinberg scholar-in-residence at New York University's School of Law in 2003. She delivered the Hamlyn Trust lecture for the Institute of Advanced Legal Studies in 2002. She was a contributor to The Bar on Trial 1982, Child Sexual Abuse Within the Family 1985 and Balancing Acts1989.

A frequent broadcaster and journalist on law and women's rights, her many media contributions and appearances include creating the BBC television series Blind Justice in 1987, presenting the BBC's Heart of the Matter throughout 1987, Raw Deal on Medical Negligence in 1989, The Trial of Lady Chatterley's Loverin 1990, and Time Gentlemen, Please for BBC Scotland - which won The Television Programme Award category of the 1994 Industrial Journalism Awards.

In 1992 she received the Women's Network Award for her work on women and justice and in 1995 added to it the UK Woman of Europe Award. For her work on equal rights she was recognised by the National Federation of Women's Institutes in 1996 who presented her with their Campaigning and Influencing Award - Making a World of Difference. In 1997 The Times gave her their Lifetime Achievement in the Law Award for her work for women and the law, and The Spectator made her Parliamentarian of the Year 2000.

If you'd like to read more about her recent mentions in the media here are a few links: 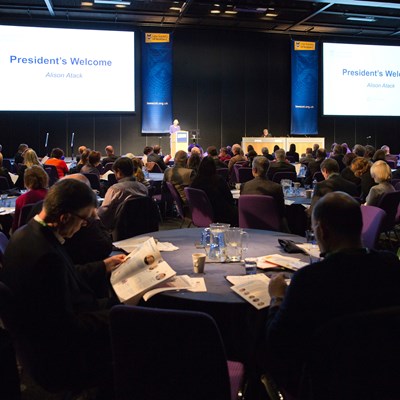 Annual conference 2021
Our 2020 Annual Conference has been postponed and will now take place on Friday 30 April 2021 at the Edinburgh...
Add To Favorites