In the next in our series of Platinum blogs, Rebecca Lindsay, trainee solicitor at Wright Johnston Mackenzie reflects on the potential loss of governmental accountability in the wake of Brexit and the possible impact on the environment.

Regardless of your political stance, it is undeniable that the debate surrounding Brexit has proven to be one of the most controversial conversations our country has had to have in quite some time.

Currently, under EU Law, the EU Commission as “Guardian of the Treaties” is able to hold member states accountable if it has concerns over the country’s compliance with EU Law. The Commission can bring a member state before the Court of Justice of the European Union (CJEU) and, on breaches of EU limits of air and sea pollution, this bold move has been made in the past to bring our own Government into line.

On exit day, whenever that may be, the European Union (Withdrawal) Act 2018 (EUWA) will bring the supremacy of EU law to an end in the United Kingdom. One of the main functions of the Act will be to repeal the European Communities Act 1972, which gives direct effect to EU law in the UK.

With grave concerns over the future of our planet, it is reassuring to learn that section 16 of EUWA calls for the introduction of primary legislation which sets out a series of environmental principles derived from EU standards. Accompanying the new legislation will be policy statements which outline how the government chooses to apply and interpret these environmental principles.

The government is legally-bound to adhere to the policy statements – but, worryingly, not to the principles themselves. With appeals to the CJEU a thing of the past post  Brexit, proposals to introduce an independent environmental watchdog to supervise Government decision making offers a glimmer of hope, but whether they succeed in holding the government to account on environmental issues, remains to be seen

Rebecca's trainee colleagues at Wright Johnston & Mackenzie, Eleanor Clarke, Qasim Ali, Rebecca Lindsay, Laura Kelly and Jesse Hevor have also contributed to our series of Platinum blogs, writing on  the Planning (Scotland) Bill, the Push for Innovation in the Legal Profession, the Changing Legal Landscape, Emerging Markets, Who Runs the World…, Is the Current System of Regulation Fit for Purpose?, Legal Technology and The Lawscot Foundation. You can read them here. 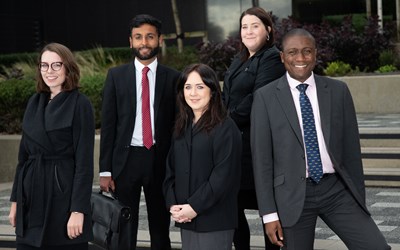 Wright Johnston & Mackenzie trainees, Eleanor Clarke, Qasim Ali, Rebecca Lindsay, Laura Kelly and Jesse Hevor contribute to our series of Platinum blogs, reflecting on a range of subjects from innovation and technology through to the regulatory system.
Read the trainee blogs

In the latest in our series of platinum anniversary blogs, Scottish solicitor and chartered trade mark attorney Caroline Pigott looks at how IP has changed over the years
Read more
Add To Favorites
Categories
News Archive
Articles Related by Category