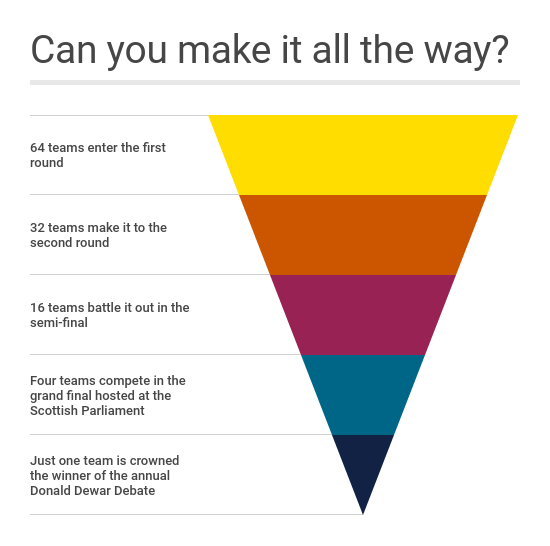 Each round of the tournament follows the below standard format, with two debates taking place at each heat.

64 teams from across Scotland will enter our tournament this year. All state and private secondary schools are encouraged to enter.

The first round heats usually take place in November and are all hosted locally, under normal circumstances, so teams shouldn't have to travel too far. Each heat will include four teams (so we have a total of 16 first round heats) and the debate is hosted by one of the competing schools.

The motion is circulated several weeks ahead of the heats, to allow schools to prepare.

Two of the competing teams in each heat will go through to the second round.

32 teams will go through to the second round to compete in an evening of debating following the same format as the first round. This round usually takes place at the end of January/ beginning of February. Again, these are hosted by a local school and the motion is shared several weeks before the heats take place.

Two teams per heat will go through to the semi finals.

Just 16 teams compete in the semi-finals of the tournament, which generally take place in March.  At this stage, competitors have had some good practice at debating and will feel much more confident, so the challenge gets greater! The semi finals don’t allow competitors to prepare in advance – instead the motion is 'unseen' and competitors get just an hour to prepare. Of course, the motion and judging takes into account that this is an impromptu debate.  Just one team from each heat will go through to the final.

The final four teams compete at the grand final, which in recent years has been hosted in the renowned Debating Chamber of the Scottish Parliament. This would be expected to take place around June.

All teams receive the motion a minimum of two weeks before the competition date, to allow time to prepare.

The judging panel in recent years has been made up of various experienced debate judges all overseen by a Chairperson, past examples of which have been:

Teams are encouraged to bring guests to observe and provide support and peers to take part in the active floor debate.

Judges from the earlier rounds are also invited to attend and the evening is always an extremely enjoyable event with impressive, high quality performances from the competing teams and the pupils joining in the floor debate.

All finalists also receive individual Quaichs and book tokens to commemorate their success.

How Debating Works What The Speakers Say