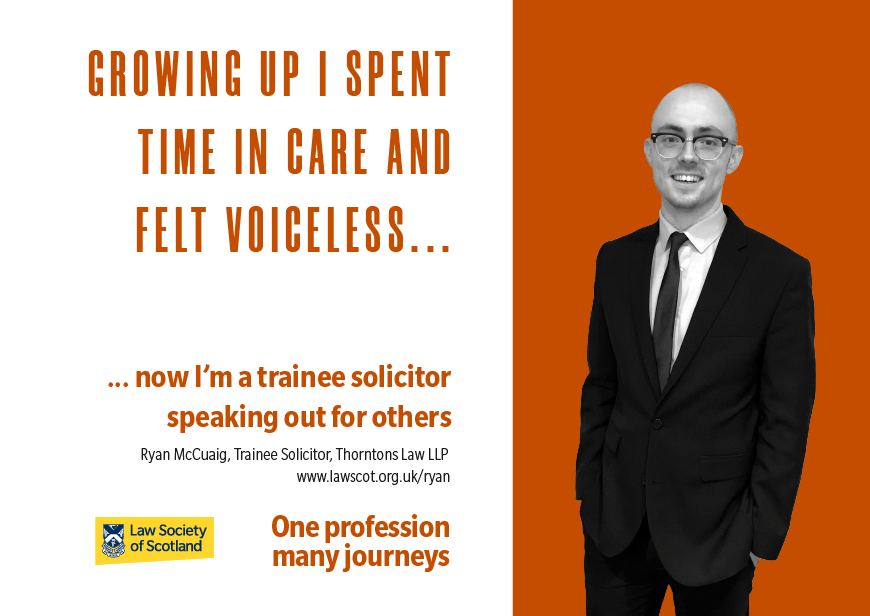 Ryan McCuaig is a Trainee Solicitor at Thorntons Law LLP and Chair of the board of Who Cares? Scotland. He explains how his experiences of growing up in some of the UK's most deprived areas led him to a career in law.

I grew up in Easterhouse, Parkhead and Bridgeton, all of which are regularly labelled as some of the UK’s most deprived areas. When I was growing up, the narrative around my community focused on issues like violence, drugs, gangs, and social dysfunction. That obviously has an effect on a community and it led many people who lived there to believe that their future was predetermined from birth. I also experienced state intervention in my childhood, when I was referred to the children’s hearing system at a very young age. This stemmed from parental addiction issues, which resulted in me being exposed to a number of harmful behaviours and situations. I was taken into kinship care and lost my mum before my seventh birthday. Thankfully, I was still able to be placed back with my Dad and he went about rebuilding our lives from that point forward.

My high school is one of those regularly labelled by the media as one of the ‘worst-performing’ schools in Scotland. Obviously, these league tables often lack analysis on poverty and the resultant social issues which the schools near the bottom are facing. Like many pupils there, I became disengaged, despite the best efforts of teachers, due to other issues that I was experiencing. I left school at 16, with a few Standard Grades and entered the workforce where I was able to form a positive relationship with an employer who helped me get some qualifications through the company that I worked for at the time. I used those qualifications to get into the LLB programme at the University of Strathclyde through a non-traditional route, where I formed a number of other positive relationships with lecturers, which benefited me massively.

In 2018, I  graduated with First Class Honours and then went onto study the Diploma in Professional Practice at the University of Glasgow, being awarded the Post-Graduate Talent Scholarship. At Glasgow, I found the university extremely supportive. They were one of the universities to lead the way on support for care experienced students and Dan Keenan, who is responsible for that role there, made the world of difference to me. I graduated from my Diploma in Professional Practice with Merit and the social media team at Glasgow made a video to celebrate my time there, which meant a lot to me. I began my traineeship with Thorntons Law LLP in their Edinburgh office in September 2019 and I’ve already had the chance to work with so many brilliant lawyers.

What was your motivation for becoming a solicitor?

I grew up in a community where it felt like the law was something that happened to us, rather than something over which we could have agency. I’ve always felt that is something that I wanted to change. I remember distinctly feeling that lack of voice as I went through the children’s hearing system. Ever since then, I’ve wanted to give that voice to others. I was inspired by human rights lawyers that I’d see on the TV, as well as those I read about in the States like Bryan Stevenson. And, of course, Atticus Finch in To Kill a Mockingbird, which should be the standard answer for every lawyer!

What challenges did you encounter?

They probably fall under two main categories. Financial – the cost of textbooks and some social events can be disproportionate to the amount of funding received by students from non-traditional backgrounds. This can isolate and exclude those students at university and I’d like to see universities act to alleviate this situation.

The other challenges were mainly social. I was the only person from my family to attend university and  I had no idea what to expect. I didn’t know any lawyers who came from my background. That’s the main reason I so openly talk about these issues now. Additionally, I was older than most ’traditional’ students, but a lot younger than the other ‘mature’ students going for a second career. I felt different and it took a while for me to overcome that.

How did you overcome these?

I overcame the challenges I faced earlier in life through forming positive relationships with people who believed in me and helped me believe in myself. I continued this into university, where my lecturers and the support staff were brilliant for me. These relationships also helped me take personal responsibility for my education and realise that I had the talent to do well, if I worked hard enough. Despite initially being intimidated by peers who had been to private school etc, I quickly realised that, ultimately, good people are good people. Many of the best friends I have from university are from completely different backgrounds to me. It reinforced for me that your background is not your fault; whether it’s like mine or whether it’s seen as more comfortable.

Did you have a role model and, if you did, who was it?

I’m not sure that there were any direct role models for me as I first embarked upon my legal education. I guess that’s one of the reasons why I am taking part in this campaign.

There is a strong, supportive legal community on Twitter, most of whom in my experience are happy to give advice to students coming through. I also used to enjoy going to court to watch various litigators in action, picking up tips along the way. At Thorntons, I’ve had the opportunity to work alongside some of the best in their field, including taking part in consultations with counsel, all of whom have inspired me in different ways. So, I think it’s fair to say I am inspired by many people!

Have you any advice for anyone considering a career in law?

The legal profession would benefit from you joining us, especially if you come from a non-traditional background. Too many people who grow up in poverty or experience adversity are taught by the society we live in that their background is a negative thing that should be hidden. I believe the opposite is true, and that true diversity of thought at all levels of our society can only make us stronger. My experience of the profession has been positive and I’d wholly recommend this career to anyone else.