One of Scotland’s most recognised and highly respected lawyers has been awarded honorary membership of the Law Society of Scotland.

The Rt Hon. Dame Elish Angiolini DBE QC FRSE has been awarded the honour at the Law Society’s annual general meeting on Thursday, 30 May 2019.

Alison Atack, President of the Law Society of Scotland, said: “I am delighted to award Dame Elish honorary membership of the Law Society of Scotland in our 70th anniversary year. She has had a remarkable career, making history as the first solicitor and the first woman to be appointed both Solicitor General and Lord Advocate, Scotland’s most senior law officer. She is truly deserving of this award in recognition of her outstanding contribution to the legal profession and her work to modernise our prosecution system and improve protections for vulnerable witnesses.

“Elish is widely admired for her energy, commitment and passion for her chosen profession and has worked tirelessly for the wider public good in each of her roles. She has been an inspiration for many throughout her career and it is a privilege to make this award.”

The Law Society of Scotland invited nominations for honorary membership for outstanding service for the public good by a Scottish solicitor as part of its 70th anniversary commemorations.

Honorary membership has been awarded to just 15 solicitors in the organisation’s 70-year history. The most recent recipient was Adrian Ward MBE in May 2017 for his pioneering work on incapacity and mental health and disability law. The Law Society is to hold a second ceremony to award honorary membership at a special general meeting in September.

The Rt Hon. Dame Elish Angiolini DBE QC FRSE was enrolled as a Scottish solicitor in 1985.

She was appointed Lord Advocate in October 2006, the first woman to hold the post as the most senior law officer in Scotland.

While in office she took forward the most wide-ranging programme of modernisation in the department’s history. She was the first Lord Advocate to remain in office despite a change in government. Previously she had been appointed Solicitor General for Scotland, again the first woman to hold this ancient post of law officer.

Following 11 years in office Dame Elish practised as a QC in Scotland, having been admitted to the Faculty of Advocates in 2008.

She chaired the Commission on Women Offenders in 2011 and went on to carry out a number of major inquiries and investigations, including a major review into the Investigation and Prosecution of Rape in London by the Metropolitan Police Service and the Crown Prosecution Service, the National Cremation Investigation, and the Independent Review of Deaths and Serious Incidents in Police Custody for the Home Office. 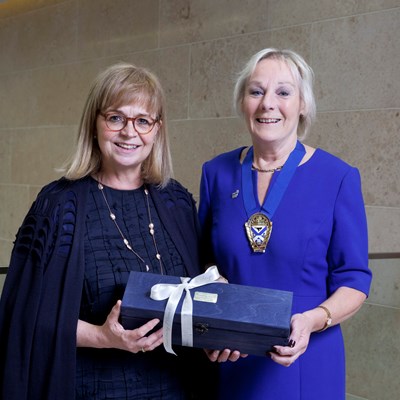