Third of solicitors are victims of violence or threats, according to survey

One third of Scottish solicitors who took part in a recent survey have been victims of violence or threatening behaviour in connection with their work.

The vast majority of incidents (90%) took place within solicitors’ offices or in a court or tribunal environment. Clients or former clients of a solicitor, or of the opposing party’s solicitor, accounted for over 60% of violent incidents.

The research, the first of its kind in Scotland, is part of the Law Society of Scotland Journal’s annual employment survey of solicitors. The results highlighted that criminal defence solicitors are most at risk, with almost half of those who responded reporting more than four incidents in the last five years. Prosecutors and family lawyers, who often deal with highly sensitive cases such as divorce and child custody, had also been targeted.

The responses showed that:

Alison Atack, President of the Law Society of Scotland, said: “I am extremely alarmed by the survey findings. People often turn to their solicitor for help and advice when they are going through very stressful and difficult times in their lives. It’s vital that solicitors, who have chosen a career in law because they want to help others, can feel safe and secure while carrying out their professional duties.

“There should be no tolerance of any threat of violence towards legal professionals, or indeed anyone providing a service to members of the public, something that has been highlighted recently by the proposed Scottish Parliament bill to protect retail workers. We are also aware the Scottish Government Justice Secretary intends to introduce measures to strengthen the rights of victims and witnesses of crime.

“We intend to take forward our initial recommendations, including working with other organisations in the legal and justice sectors, as a matter of urgency to try to minimise the risk of violence against people working in the legal sector.”

The Law Society recommendations aim to improve solicitors and other legal professionals’ personal safety and build a ‘no tolerance’ culture across the legal and justice sector to reduce violence and threatening behaviour. The recommendations include:

The survey findings have also indicated that solicitors’ colleagues, or those representing the opposite party, accounted for a minority of incidents, with approximately one in seven involving violence and a slightly higher proportion involving threats.

These findings are part of the annual employment survey carried out by the Law Society of Scotland Journal. In addition to the questions on violence in the profession, the survey has gathered data on pay, work life balance and views on the future of the profession.

Further information about the survey data on violence affecting the legal profession is available on our website. 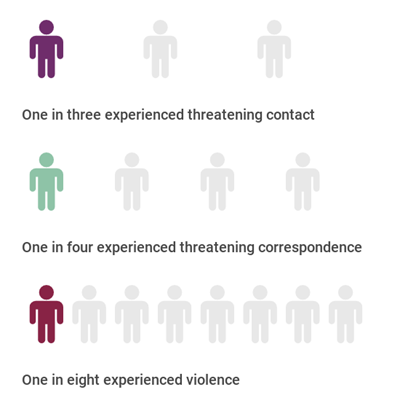