This year’s annual student competition run by the Law Society in partnership with the Scottish Parliament took a step away from the traditional essay format and invited students to produce either a blog or a video.

We asked students to consider the broad topic of, ‘how the rule of law, in the way it is upheld by the Scottish Parliament, has a direct impact upon our lives as citizens of Scotland’; select a sub-theme to focus on, and then present it in a way that our youngest voters would engage with.

We’re thrilled to announce that Kirsty Lauder created our winning entry, a video that succeeded in addressing and explaining the complex issue of hate crime.

Following a screening of her video in the Society’s Edinburgh offices, Kirsty was presented with a £500 prize donated by the Law Society. The other part of her much-deserved prize, a three-week work experience placement in the Scottish Parliament’s Legal Services team, will kick off in June.

We had a quick catch up with Kirsty to find out how she feels about her success!

How did you find out about the competition and what made you enter?
I actually saw the competition promoted on Twitter. The opportunity to do work experience at the parliament is totally unique and something that really appealed to me as I’m passionate about working in the public interest. I also thought it might be a bit of a challenge! Vlogging is a bit of a phenomenon and I’ve never tried anything like it before.

Why did you choose ‘hate crime’ as the subject of your video?
I was reading an article on the subject and thought that it would be something that young people would also be aware of, especially in the aftermath of Brexit when it’d often been discussed. It struck me that it might be helpful to provide more of an informed background to hate crime as sometimes the facts aren’t always presented clearly in the media.

What are you most looking forward to experiencing while working at the parliament?
Everything really! I know I’ll be predominantly working on a data protection project which will be really interesting, but it’ll also be fun to get the chance to do some different things like go to First Minister’s questions and work with the media relations team.

What made you study law and what drives you to qualify as a solicitor?
I’m really passionate about working in the public interest and to change things so they work better for people. This is why I’m also so looking forward to working at the parliament, as it’s about holding politicians to account and working for the county and the people, rather than for business purposes.

What aspects of being a law student have you enjoyed most?
My year abroad was definitely a highlight, when I studied for a year in Maastricht in the Netherlands. I also loved working closely with other people in groups. One of my most memorable moments was participating in a mock trial for the International Court during an international criminal law tutorial. My partner and I did a massive amount of preparation together and performed really well.

Where do you see yourself in ten years?
Maybe a movie maker? That’s so hard to answer as I want to do everything in law! It’s hard to know at this stage as you have to be quite ‘traineeship focused’ as a student and are just thinking about the next two years. I do know I am keen to always work in the public interest whatever happens.

Kirsty has completed her Diploma in Professional Legal Practice and will soon be starting a traineeship with Edinburgh Council, which she’s really excited about given her particular interest in public law – best of luck Kirsty! 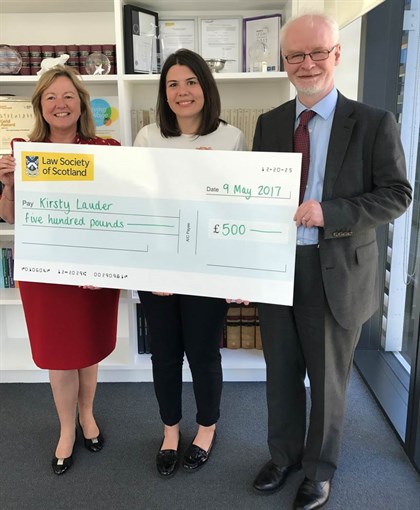