The Law Society of Scotland has said it is frustrated and disappointed after the Scottish Legal Complaints Commission (SLCC) laid its final budget before the Scottish Parliament. It includes the 12.5% increase in the amount that will have to be paid by each practising solicitor.

The Law Society had raised serious concerns about the proposed fee rise during the SLCC’s formal consultation and questioned the justification for the increase. The Society said the substantial increase was unacceptable when the public sector was facing pressure to control costs and undertake strict financial discipline.

Hundreds of solicitors sent thousands of emails to their local Members of the Scottish Parliament to object to the plans. However, the SLCC final budget has now been formally laid before the parliament. No changes have been made in response to the concerns raised.

Law Society President Eilidh Wiseman said: “Despite all the concerns raised by the legal profession and by Members of the Scottish Parliament, the SLCC has refused to make any changes to its budget proposals. It is deeply frustrating and underlines the lack of oversight which exists. The SLCC could have doubled or even tripled its budget and nothing could have been done, whether by the people who pay for it or our democratically elected representatives.

“Yesterday, the Scottish Government announced the details of an independent review of legal services and regulation. We are keen for the review group to look at the whole system for legal complaints which is slow, complex, cumbersome and expensive. The events of the last few weeks have also shown the need for the group to consider how we can improve accountability and oversight to avoid situations like this arising in the future.

“In the meantime, we want to thank all those MSPs who responded so positively to their constituents’ requests and made direct representations to the SLCC. Those efforts were greatly appreciated." 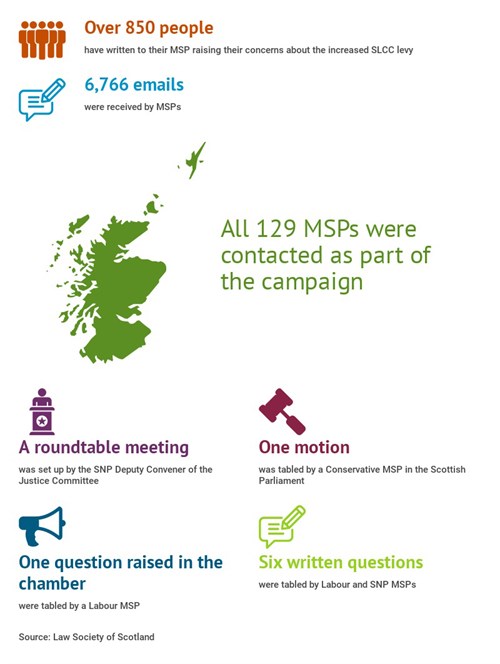