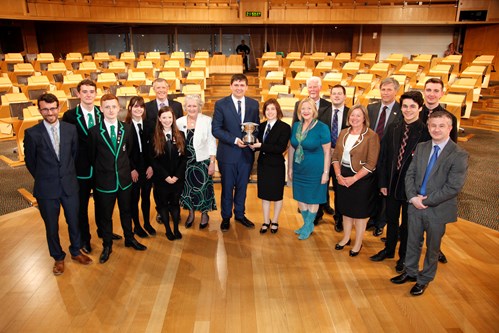 Caitlin and Finlay debated the motion ‘This House supports the right to be forgotten online’ in the Scottish Parliament’s main chamber.

To get to this stage of the competition, the students have already had to tackle topics such as introducing measures to promote women in government, compensation for historical injustice and whether the internet does more harm than good.

Ross Heenan and Andrew Buchan from Braes High were runners up with Laura Wood and Sarah Gardner from The Royal High and Adam McGirr and Paul Hansen from St Maurice’s High also competing in the final.

Pupils from the schools across Scotland that entered this year’s tournament were among the audience for the final and took part in a floor debate. Lauren Miller from Braes High was awarded the prize for her contribution.

Eilidh Wiseman, president of the Law Society of Scotland, said: “I congratulate Caitlin and Finlay for their outstanding performance – it really was impressive. Many congratulations must also go to the three other teams in the final. Getting to this stage is an incredible achievement, particularly when you consider that there were teams from over 100 schools in the opening rounds of this year’s tournament. All of our finalists should feel very proud of their success.

“It was a privilege for us to host the tournament final in the debating chamber of the Scottish Parliament once again. I would like to thank the Deputy Presiding Officer, Linda Fabiani MSP, for such an excellent job in presiding over the final. Thanks too, go to our judges who had the challenging task of selecting the winning team.”

Liz Campbell, director of education, training and qualifications at the Law Society, said: “It has been a fantastic tournament and all the teams who have reached this stage are to be congratulated – it was a very closely contested final.

“Each of the teams presented articulate and convincing arguments both for and against the right to be forgotten online and I’m sure that everyone who attended found the debates interesting and thought-provoking.

“Debating is a great skill to have; as well as helping pupils learn how to build convincing arguments it gives them a chance to express their views and opinions. In the earlier rounds we included motions relating to EU membership, immigration controls and banning opinion polling in the month before a vote and it’s been great to see young people in Scotland engaging with these issues.”

The winning team was presented with the tournament trophy and £1,000 for their school from the Law Society. Runners up received £250 from the Glasgow Bar Association. All finalists received individual quaichs and certificates to commemorate their success and tournament sponsors, Hodder Gibson Publishers, donated educational books to the value of £500, to be shared by the winners and runners-up. A prize of £50 worth of book vouchers was also awarded for the best floor speech of the night.

Further information and a video about the tournament can be found at www.lawscot.org.uk/debating.

The four teams in this year’s final were: