The UK's Withdrawal from the EU - what's next?

At 11pm on Friday 31 January, the process of the UK's withdrawal from the EU reaches another watershed moment as we mark our official departure, or 'exit day', as defined in section 20 of the European Union (Withdrawal) Act 2018, and from which all subsequent primary and secondary legislation relating to the UK's departure from EU takes effect.

A brief summary of what this means and what the current situation and next steps are is as follows:

Our priorities for the future relationship negotiations

We have been in regular contact with the Ministry of Justice and other stakeholders within the UK legal services sector to identify and promote our priorities for the next phase of negotiations. We will continue to promote the interests of our members now and in future services-focused negotiations in relation to areas including the ability to provide advice on EU law; to provide services in the EU on a temporary basis, including by way of the introduction of a foreign legal consultant (FLC) status (or equivalent) to facilitate the temporary provision of services and establishment of Scottish lawyers in the EU; and to seek mechanisms to ensure mutual recognition of qualifications with competent authorities in other member states.

We will stress the importance of civil judicial cooperation at a level which would be as close to the current provisions as possible. We will also underline the distinct nature of Scotland's legal system relating to both civil and criminal law. We have our own court structure, legal profession, prosecution service and police force and as such, the role of Scottish organisations and institutions need to be factored into such negotiations. These include the Scottish Government Justice Department, Scottish Courts and Tribunal Service, Crown Office and Procurator Fiscal Service, Police Scotland Service and Scottish Prison Service. The highest levels of security should be maintained and the protection of both UK and EU citizens need to be secured.

We have scoped the impact on Scots law in our paper The Future Impact and Effect of Brexit on Scots Law and the Scottish Legal System.

Both in the run-up to and following the referendum on EU membership on 24 June 2016, we have sought to inform and update our members and the public via our website, as well as blogs, Journal articles and focus groups on the relevant developments and likely impact on Scots law and legal practice.

During this next phase, we will monitor the progress of negotiations and continue to provide updates as they develop. We will update the Q&A section on the Brexit pages of our website and will keep the materials produced in preparation for a no-deal Brexit live, as the issues raised could potentially still be relevant in the event that it is not possible for the negotiators to give detailed consideration to all aspects of legal services in the time allowed.

The UK Law Societies' Joint Brussels Office continues to provide an EU perspective on the legal and practical consequences of the UK's departure. You can read their most recent article on the upcoming FTA negotiations. You can also sign up directly to receive their monthly newsletter.

If you have any queries or concerns about this next phase, please contact our Head of International, Katie Hay 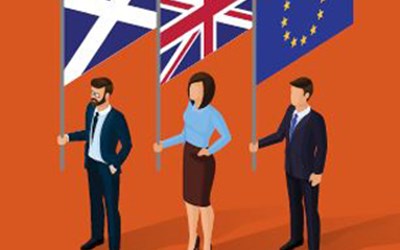