Aimee Ross and Orla McMichael from Fortrose Academy were not overawed by the final’s grand surroundings in the Debating Chamber of the Scottish Parliament, beating out three other schools last night to win the competition organised by the Law Society of Scotland.

The motion debated in the final was:

Law Society of Scotland Vice President Sheila Webster said: “I’d like to congratulate all eight pupils from the four schools that made it to the final, but especially to the winning team of Fortrose Academy. You should all be proud of what you’ve learned and achieved.

“The judges had a hard time picking a winning team and runners up, with the skills displayed by all teams worthy of the Scottish Parliament. I was impressed to see the teams developing and then presenting strong arguments while under tight time pressure.

“It was brilliant to be back in such an impressive venue after a difficult few years. I’d like to thank the Scottish Parliament for hosting and also the Deputy Presiding Officer, Liam McArthur, the judges and sponsors for their continued support.”

The winners, Fortrose Academy, will receive £1,000 for their school, while the runners up, the High School of Glasgow, will receive £250 – with the prizes donated by the Law Society. Both schools will receive educational books to the value of £500, provided by tournament sponsors Hodder Gibson Publishing.

All finalists received a commemorative quaich to mark their success.

There was also a floor debate for school pupils in the audience, who had competed in previous rounds. The floor prize winners were Innes Morgan from Thurso High School and Ruairidh Williams from the Royal High School, who each received a £50 book voucher.

It’s the 23rd year the tournament has been held, with 64 schools lining up for the start of this edition last September. We look forward to seeing many of the teams who competed again for the next edition. 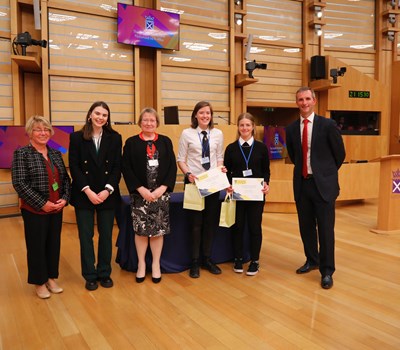 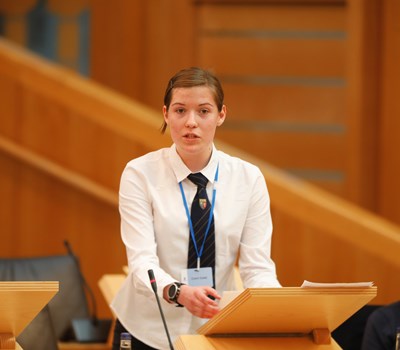