We're carrying out a project to gather together records of those members of Scotland’s legal profession who served and fell during the First World War. 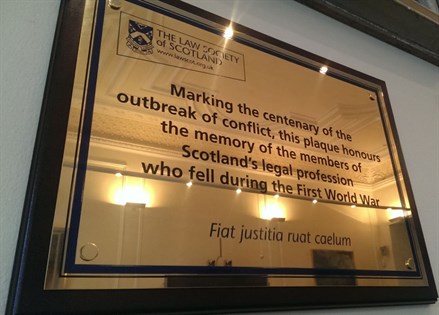 Launched on 30 March 2015 with the unveiling of a plaque at our offices in Edinburgh, the project seeks to create a lasting record of those who died during the conflict. They have many memorials: in their schools, universities, and hometowns. But until now, there has been no recognition of them as lawyers, except where their local offices, faculties, associations or the Writers to the Signet had installed commemoration plaques.

The plaque will act as a focal point for work to produce as comprehensive a set of records as possible. This will be brought together to form a lasting archive both in physical and digital form to preserve the memory of those who fell for future generations.

This project will only be possible with the assistance of schools, universities, faculties, associations and societies who hold their own records and memorials. The Society is also keen to hear from family members who may have their own stories to add or anyone interested in helping to carry out the research.

If you have any information, records and stories to share, or if you would like to get involved in the project, please contact warmemorial@lawscot.org.uk or call Tim Mouncer on 0131 476 8186.

2015 marks the 100th anniversary of the Gallipoli campaign. As part of our war memorial project and to commemorate those who served and fell, two Scottish lawyers who died in the campaign are profiled below. 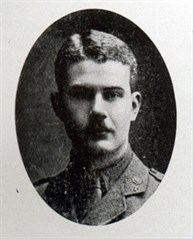 Reginald Gibson was born in 1894 and was the younger son of James Gibson S.S.C. Edinburgh ( his elder brother was also killed) and 18 Great King Street, Edinburgh.  He was educated at George Watson’s College from 1902- 12.He was the School Champion at the Games in 1912 and School Captain of the 1st XV in his last year.  He went to Edinburgh University to study Arts and Law which he did not complete due to enlisting to fight when the war broke out.  As a member of Edinburgh University OTC, he was commissioned as a 2nd Lieutenant in the 4th Battalion (Queen’s Edinburgh Rifles) Royal Scots.

He fell in action at Gallipoli on 28 June 1915 aged 21 years. The action in which he was most likely to have been involved was at Gully Spur, Cape Helles which was by 5 July 1915 ultimately a success for the British, though inevitably having sustained heavy causalities.  Battle began on 10.45am on the day that he was killed.  He is remembered at Helles Memorial, Sedd el Bahr, Turkey. 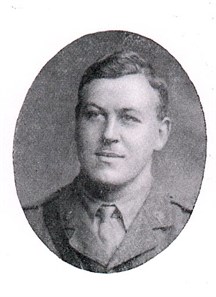 Patrick Considine was born in 1893 and died as a result of wounds received in action on 28 June 1915 in the Dardanelles campaign on 12 July 1915. (His elder brother John was also killed in 1915) He was the son of William and Kate Considine, W.S, 2 Alvanley Terrace, Edinburgh. He was educated at George Watson’s College 1899-1906 and then at Merchiston Castle School where he was a prefect, in the 1st XV and the Shooting V111 of the Cadet Corps 1906-12 ending up as Company Sergeant Major.

He was a student of Law at Edinburgh University 1913-1914 and an apprentice CA.

When leading a bombing attack on the Turkish trenches, he was severely injured. He was a lieutenant in the 4th Battalion, Royal Scots. His grave is at Addolorata Cemetry, Malta. The cemetery lies south on the outskirts of the village of Paola.