What is reasonable chastisement?

Review of cases of child chastisement, suggesting that it must be reasonable and moderate in relation to its end and the welfare of the child is the key consideration
1st June 1999 | Paul Spink, Sadie Spink

Last Christmas Eve a man (who cannot be named) took his daughter to the dental surgery at Motherwell Health Centre for emergency treatment.  The eight-year-old balked at the prospect of having an injection to enable a tooth to be extracted.  For some 40 minutes her father attempted to reason with her in the waiting room at the surgery.  Eventually, the man lost patience with his daughter.  He held her over his knee, pulled down her leggings and underwear, and smacked her on the bare bottom up to seven times.  Allegedly, the girl screamed “Daddy please don’t hit me” and then ran out of the waiting room.  She hid behind a ember of staff who came to her aid as her father continued to try to smack her.

Realising the gravity of the situation, the man went immediately to the local police station and confessed to the incident.  He explained that his daughter had been in pain from her tooth for several days and that he had wanted to ensure her Christmas was not spoilt by suffering.  The next available appointment at the surgery was January 5.

In May 19 the man, a 48-year-old primary school teacher, was convicted of assault.  Sentence was deferred until June 9 to enable consideration of background reports (after the time of writing).  The man was ordered to stay away from the family home for two weeks over the Christmas period.  His family is now subject to surveillance by social services, and he faces the very real prospect of losing his job.

There but for the grace of God go many.  As mother and father of four, these commentators know only too well that this case may inspire a comment of guilty reflection in many good and responsible parents.  How many of us can claim that we have never lost our temper with a child? According to Erskine (I, vi, 53), parents may exercise over their children “that degree of discipline and moderate chastisement upon them, which their perverseness of temper of inattention calls for”.  The present case turned on whether the parent’s actions constituted reasonable chastisement, which serves as a defence to the common law crime of assault.  There is no clear definition of this concept and it is difficult to draw a line between reasonable and unreasonable force.  In addition, whereas under English law in assault may be committed negligently or recklessly, in Scotland evil intent is a fundamental component of the crime.  The requirement that dole be provided adds an interesting angle in the particular circumstances of this type of offence and is often the central issue in litigation.  In Gray v Hawthorn 1964 JC 69, which involved a headmaster charged with assaulting a pupil, dole was inferred “only from the excess of punishment”.  The headmaster used a leather strap to hit the boy repeatedly over a two-hour period to punish various minor transgressions.

In the present case, Sheriff Russell found that the Crown had clearly proved that unnecessary suffering had been caused.  It is submitted that several “aggravating” factors conspired to produce this verdict.

First, the act of stripping the gild must be called into question.  There is no reason why chastisement in any context, let alone the public settling of this incident, should involve the stripping of a child.  It is difficult to conceive of any circumstances in which this degrading and humiliating act might be deemed justified.  The child in this case was eight years old and fully able to appreciate the consequences of having her underwear publicly removed.  It was simply not appropriate.  In addition, as the Sheriff noted, “the nature of striking her on the bare bottom and the severe force of the blows went beyond the scope of reasonable chastisement a parent is entitled to use.  That provides proof of evil intent”.

This contrasts with jurisprudence developed in earlier cases.  In Guest v. Annan 1988 S.C.C.R. 275 a father smacked his eight-year-old daughter for failing to return home at the appointed time and then lying about whom she had been with.  She received a bruise on her bottom from the smacks.  Before the sheriff, the father was convicted and fined £50.  On appeal the High Court quashed the conviction.  The force of the blows, while found to have been excessive, was not deemed to prove evil intent per se.

Second, the repetition of the blows clearly aggravated the incident.  Try smacking a table once, then try it seven times.  One smack may chastise, but to repeat the blow seven times suggests a vindictive intent to harm that goes beyond any disciplinary object: Gray.  That said, in terms of the point of the blow, it is at least submitted that smacking on the bottom is to be preferred to most other areas of the body, due to the presence of muscle to absorb the smack, and the absence of any vulnerable bone or organ.  There is, for example, considerable authority that striking a child on the head will be deemed unacceptable, irrespective of whether physical harm results, due to the inherently dangerous nature of the act: Ewart v Brown (1882) 10 R.163; Ryan v Fildes [1938] 3 All E.R. 517.  In Peebles v MacPhail 1989 S.C.C.R. 410, a mother slapped her two-year-old son across the face, knocking him off balance, after the child had thrown a temper tantrum.  A charge of assault was held by the sheriff as proved.  On appeal, which was refused, the Lord Justice General observed that “to slap a child of two years old on the face, knocking him over, is an act as remote from reasonable chastisement as one could possibly imagine”.

Third, after the initial series of smacks, the girl ran out of the room and sought safety behind a member of staff.  The father’s decision to follow, and his attempt to continue smacking the girl, suggests a loss of control and unfocused aggression.  This aspect of the incident also graphically illustrates the fear that the girl experienced.  There is, however, clear authority to suggest that the mere fact that a parent is overtly angry when punishing a child cannot be itself demonstrate the existence of evil intent.  In Guest, the anger displayed by the father when he smacked his daughter did not in the view of the Court justify the sheriff in concluding that there was the necessary criminal intent.  This finding was endorsed in the case B. v Harris 1990 S.L.T. 208, which saw a mother strike her nine-year-old daughter with a belt in a fit of temper during a row.  It is submitted the latter case prompted the Court of Session to adopt a curiously permissible attitude to corporal punishment.  It is doubtful whether the spontaneous use of an implement would be tolerated in a contemporary court.

Fourth, the motive behind the father’s action must be questioned.  Physical chastisement is generally justified as means of signalling and correcting bad or dangerous behaviour.  His daughter did nothing wrong and she was doing noting to put herself or any other persons in immediate jeopardy.  She was merely afraid: exhibiting a fear that afflicts many adults, let alone children.  Accordingly, it could be argued that the punishment inflicted by her father lacked even this fundamental justification.

Another recent case poses an interesting scenario.  On May 24, The Scotsman reported that a Dundee man had been charged with assault for smacking his child.  The man allegedly smacked his son once on the bottom, to stop him wandering repeatedly onto a road.  At first sight the case is less clear cut than the recent prosecution.  There was a clearer corrective motive behind the punishment.  As the man himself put it “a smack is better than being hit by a car”.  It is claimed that only one blow was administered, that the child’s bottom was not exposed, and that the boy did not cry after the blow (it is submitted this particular fact may prove double-edged).  However, when examined the boy exhibited a bruise on his back, purportedly from an earlier accident, and the man has publicly admitted that he had previously been charged with assaulting the child, although this charge was never sustained.  The case has been passed to the procurator fiscal, but by the time of writing no complaint had been served.

These latest cases have inspired new calls for clarifying legislation from child protection groups.  While the Scottish Parliament has yet to speak on the issue, Westminster is committed to preserving the parent’s right to discipline a child physically within a caring and loving environment.  The 1998 European Court of Human Rights adjudication in the case A. v UK challenges the status quo.

This case involved a nine-year-old boy, who on more than one occasion was beaten with a garden cane by his stepfather.  An English crown court jury acquitted the stepfather of assault, but in a typically purposive ruling the European Court found the boy had received treatment sufficiently severe to reach the level prohibited by Article 3 of the European Convention of Human Rights.  This states that no one shall be subjected to “torture or to inhuman or degrading treatment or punishment”.  The boy was awarded damages, and at the time the UK Government agreed that the law on reasonable chastisement should be changed.  Although a political hot potato, in terms of legal clarity the most straightforward response would be an outright ban.  This would bring us into line with eight other European states, including Sweden and Denmark.  However, the Government confirmed it does not intend to outlaw parental smacking in a recent consultation paper.  Many, including David Hinchliffe, chairman of the Commons health select committee, have predicted “severe difficulties” for the Government in marrying stipulations on an acceptable level of physical force with adoption of the European Court’s ruling.

In summary, it is possible to identify factors that will determine whether or not a parent has the requisite evil intent at moment he or she inflicts physical punishment on a child.  These include the nature and force of the punishment (including the point of the blow), the repetition or duration of the punishment, the manner and method of its execution, the age, sex and health of the child, and the blameworthiness or dangerousness of the child’s conduct: see Gray.

The parental right of reasonable physical chastisement is typically justified as a means of promoting responsible, appropriate and safe behaviour, which ultimately further the welfare of the child.  However, while this objective sanctions the right, it also serves to limit its exercise.  If it is to be considered lawful, chastisement must be reasonable and moderate in relation to its end.  The welfare of the child is the key and overriding consideration, and deservedly so.  If, in the circumstances, this factor is unduly prejudiced by the exercise of parental discipline, resort to the use of force is unlikely to be deemed reasonable and accordingly there will be no defence to a charge of criminal assault.

Paul Spink is lecturer in law at the University of Stirling.  Sadie Spink is Scottish Childminding Association Development Officer for Perth & Kinross. 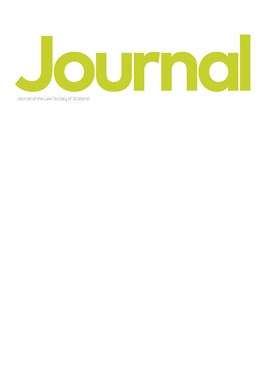