What is the purpose of the law of contract? Traditionally, it supported the principle that agreements freely entered into by persons with full legal capacity should be kept: pacta sunt servanda. In relation to executory contracts, the parties have bargained for a “tract of future time” when each can expect the other to perform, thus creating certainty in commercial transactions. Prima facie, either party can be compelled to perform their obligations by a decree of specific implement, failing which, the innocent party can obtain damages for breach of contract from the guilty party, i.e. the party who had failed to perform. The thrust of Scots law was to uphold the rights of the innocent party even if this resulted in unfortunate financial consequences for the wrongdoer who, after all, had ex hypothesi broken the contract.

In its Discussion Paper on Remedies for Breach of Contract, the Scottish Law Commission raises issues which must call us to question the traditional exegesis outlined above. The Paper is a model of its kind. The current law is explained simply but accurately, its defects (in so far as there are defects) illustrated by ingenious examples often based on reported cases. Throughout comparisons are made with the Principles of European Contract  Law (ed Lando) and the Unidroit Principles. The suggestions made are measured and thoughtful. Most important of all, the paper is an enjoyable read for every lawyer interested in contract.

It begins by exploring the concept of breach of contract. While most breaches amount to a failure to perform the undertakings in the contract, the Commission suggests that breach of a contractual warranty, for example, that a state of fact exists, should be regarded as a breach of contract, albeit not a failure to perform. This is a very sensible clarification of the law, if there really is a doubt on the status of a warranty.

Scots law makes a crucial distinction between a material and non-material breach of contract. When a material breach occurs the innocent party can elect to rescind the contract, i.e. to treat himself as freed from performance of any outstanding obligations. For example, if goods do not conform to description, this is a material breach: the buyer can rescind, i.e. reject the foods and refuse to pay the price. In addition, the innocent party can sue for damages. If, however, a breach is not material, the innocent party’s remedy is restricted to damages. Indeed, if an innocent party treats a breach as material when it is not, the innocent party goes into breach; Wade v Waldon 1909 SC 571. The paper considers whether or not a statutory definition of material breach would be helpful. In the present writer’s view, material means serious as opposed to trivial and most of us can make that distinction most of the time. The important point is that the parties are free – and should continue to be treated as material even if objectively – the effect of the breach is not very important. The fact that the parties have agreed that a breach is to be regarded as material shows that performance of that obligation is important for these particular parties. When the parties have not expressly done so, there is merit in the suggestion that there should be an ultimatum procedure when a party’s failure to perform, after the ultimatum has been notified, is to be treated as material. Less attractive is the suggestion of a summary declarator procedure, when the court would determine whether or not a breach was material before the innocent party rescinded.

Throughout the paper, concern is expressed for the contract breaker. In particular, it is questioned whether she should be disentitled from her contractual remedies merely (sic) by being in breach. In the present writer’s view, a party in breach should only be disentitled from pursuing contractual remedies when the breach is material. Even then, if the innocent party rescinds, the guilty party may pursue a claim in unjustified enrichment: Graham & Co v United Turkey Red Co Ltd. 1922 SC 533. If this is not the current position, I would accept the paper’s suggestion that the law should be clarified. Similarly, I have always thought that an innocent party can only suspend his performance in response to a material breach. When there has been substantial performance by the contract breaker, the innocent party cannot therefore refuse payment because it is unlikely that the breach will have been material. Again the paper suggests that the law is unclear. Whatever is done, any recommendation that the “right” to suspend must be exercised in good faith should be firmly rejected.

On rescission itself, the paper takes the view that the innocent party should give some intimation of his intention to rescind. This is fair enough provided it is remembered that it is the material breach which triggers rescission at the election of the innocent party. Accordingly, if he elects to rescind, his obligation to perform is discharged from the date of the breach, not intimation to the guilty party. Many breaches, while material, are remediable.

The paper explores the question whether the guilty party should be given the opportunity to cure the breach before the innocent party can rescind. The right to cure is fashionable but, in the present writer’s view, undermines the fundamental principle that the innocent party should not have to accept performance from a person who, ex hypothesi, has committed a serious breach of contract. The fact that the Discussion Paper substitutes “contract breaker” for guilty party and “aggrieved” for innocent is not, of course, conclusive of the outcome of this debate!

One of the most controversial issues is the extent to which any economic imbalances between the parties after rescission should be redressed by the law of unjustified enrichment. Since rescission is only possible after a material breach, it could be argued that losses and benefits should lie where they fall when this would amount to an additional sanction on the contract breaker. This would not appear ever to have been the position in Scots law. Restitutionary remedies may be available to the guilty as well as to the innocent party. Thus, in a contract of sale of goods, for example, it is trite law that a purchaser can recover the price paid if he rejects the goods as disconform to contract: McCormick & Co v Rittmeyer & Co (1869) 7M 854. Similarly, if an agent has provided services under a contract, she is entitled to recompense, even if she has been in material breach of the contract: Graham & Co v United Turkey Red Co Ltd. 1922 SC 533. But there are difficulties. For example, the innocent party may have made a bad bargain, i.e. would have been economically worse off even if the contract had been properly performed. In other words, the innocent party’s expectation interest is less than his reliance interest. Should the law allow a claim in unjustified enrichment in this situation, if the innocent party elected to rescind after a material breach? Connelly v Simpson 1993 SC 391 suggests not. Instead, the expectation interest is seen as a “cap” on a restitutionary claim. But, as the paper explains, this can lead to anomalous results. However, unjustified enrichment, the long neglected child of the law of obligations, has recently come of age. There is much to be said for the Commission’s preliminary view that the problems encountered on rescission should await judicial solution based on unjustified enrichment rather than in a statute dealing with reform of the law’s remedies for breach of contract.

White & Carter (Councils) Ltd v McGregor 1962 SC (HL) 1 provides a litmus test for conflicting approaches to the law of contract. There, it will be remembered, the defender was guilty of an anticipatory breach of contract. Instead of rescinding the contract, the pursuer elected to perform. As a consequence, the pursuer sought full payment for the unwanted services in an action for debt, without having to mitigate its loss, which would have been required in an action for damages. On a 3:2 majority, the House of Lords held that the pursuer was entitled to do so. In my view, White & Carter is a simple illustration of the fundamental principle that contracts should be performed. But others have argued that one party should not be allowed, by wasteful or unreasonable conduct, to increase the financial burden on the other, even although she has broken the contract. The Commission favours a middle course and wishes to solve the White & Carter “problem” by allowing the innocent party to perform unless he could have given a substitute performance without significant effort or expenses or his performance is unreasonable in the circumstances. But this undermines the fact the other side has ex hypothesi unilaterally repudiated the contract.

The remedies of specific implement and interdict are discussed. The former passes with flying colours: the latter contains a useful discussion of how the law became over complex in relation to negative interdicts with positive effects. The solution suggested is that it should be competent to grant an interdict, notwithstanding that in substance it compels performance of a contract.

Finally, the paper considers the law of damages. Here the Commission appears to be conservative and suggests that damages should only be used to compensate for loss or harm caused by a breach. That is surprising. The point is that the essence of a breach of contract is that the guilty party has failed to perform or has performed inadequately. That is why specific implement is the primary remedy for breach in Scots law. Failure to perform what has been agreed should give rise to a monetary claim if specific implement is not awarded. But what is being substituted by money is the failed performance which is often, but not necessarily, the innocent party’s loss. Therefore why shouldn’t the general law of damages include restitutionary or disgorgement elements? If A lends B £500k to purchase a building and in breach of contract A successfully invests the money in shares, why should B not be able to recover A’s profits? Teacher v Calder (1898) 25R 661; (1899) 1 F (HL) 39 is authority that A cannot recover – but why is it wrong in principle? A has been denied the agreed performance. Similarly, once we see that there is no necessary link between loss and damages, prima facie, the innocent party should be entitled to the full cost of cure of defective performance. The unprincipled compromise reached in Ruxley Electronics and Construction Ltd v Forsyth [1996] AC 344, should not be transplanted into Scots law. There the House of Lords refused the defendant the cost of reconstruction of his swimming pool to conform to the contractual specifications on the ground that it could still be used for the defendant’s purpose. (In fact, there was evidence that if his counter-claim had been successful, the defendant would not have spent the money on the pool). The paper suggests that such cases require special treatment – sed quaere? More welcome is the proposal that contractual damages should be awarded for non-patrimonial loss such as distress.

As the outset, I welcomed this Discussion Paper. It does cause the reader to think again about the function of the law of contract. Given the tenor of the proposals, it is clear that the present writer’s view outlined above appears to differ from that of the Commission. Nevertheless, the paper gives much food for thought and room for compromise. Scots law is, after all, a mixed legal system, though as John Blackie has observed, it need not be muddled. 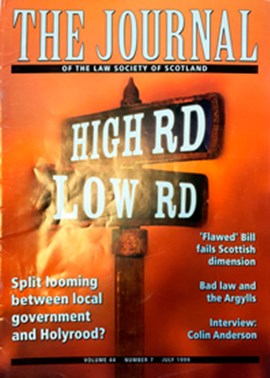