European law in the Scottish courts

Consideration of Nguyen v Searchnet Associates as illoustrating the importance of European law for Scottish practitioners
1st October 1999
In June a judgment was issued in the case of Eric Nguyen v Searchnet Associates Limited and Sheriff Principal Nicholson made some interesting observations about the need for practitioners to be aware of Community law considerations in cases coming before the Scottish courts.  In particular he stated:

“Notwithstanding the requirement of Community law that courts should, if necessary ex proprio motu, give effect to Community law, the fact remains that sheriffs, and possibly judges at all levels, normally expect those appearing before them to alert them to any relevant law, whether national or European; and it seems to me to be expecting a lot to assume that sheriffs will always have the relevant law at their fingertips whether or not they are referred to it by parties. However, the present case may offer a salutary lesson that both sheriffs and practitioners must try to be aware of any possible European dimension, particularly when one or more of the parties is a national of, or resident in, another member state of the Community; and it may be that in such cases, even if Community law is not referred to by the parties, sheriffs should in future ask parties or their representatives whether or not there is any relevant part of Community law to which attention should be given”.

The case in question was an appeal against an interlocutor in which the sheriff granted decree of absolvitor in favour of the defenders.  That interlocutor followed from an earlier interlocutor in which the sheriff had ordained the pursuer to consign the sum of £4,000 in respect of potential liability for the defenders’ expenses in the hands of the sheriff clerk.  As a result of the pursuer’s failure to consign the money, the sheriff granted the decree against which the appeal was then taken.  In the action the pursuer was seeking payment from the defenders of a sum of money which he claimed was due to him in respect of computer programming work which he did in Edinburgh on behalf of the defenders during 1997 and 1998.  The pursuer was a French national and, although he had been in Scotland when he carried out the work, at the rime of raising the action he was living and working in the Netherlands.

The main ground for appeal was that the sheriff, in ordering the lodging of caution in circumstances where the pursuer was an EC national residing in another EC member state, was in breach of the pursuer’s rights under EC legislation.  In particular, it was argued that the order for caution was in breach of Article 12 (formerly Article 6) of the EC Treaty.

Article 12 of the EC Treaty (as re-numbered after Amsterdam) provides as follows:

“Within the scope of the application of this Treaty and without prejudice to any special provision contained therein, any discrimination on grounds of nationality shall be prohibited.”

It was held on appeal that since the overriding considerations which had influenced the sheriff’s decision to order the money to be consigned were the facts relating to the pursuer’s nationality and residence, this was plainly contrary to Article 12 of the Treaty and the sheriff’s decision was fatally flawed in that regard.  The sheriff principal considered whether there were other reasons which would have entitled the sheriff to make an order for the finding of caution.  On the basis of what was said in an English case Fitzgerald v Williams [1996] QB 657, the sheriff principal stated that, in a case like the present one, Community law did not impose an absolute prohibition on an order for caution.  However, such an order would be justified only where, apart from questions of nationality or residence, there was “very cogent evidence of substantial difficulty in enforcing a judgment” in the other member state.  It was held that in the present case there was no such cogent evidence and the interlocutor was recalled.

This case is a very useful example of how Community law can assist pursuers in the Scottish courts – provided that solicitors are aware of the rights which Community law gives to individuals.  Community law does not solely impose obligations on member states; the EC Treaty itself confers rights and obligations directly on individuals, both expressly and by implication, quite independently of national legislation or any rules of the common law.  This is what is known as the doctrine of direct effect and it allows provisions of Community law to be relied on in national courts.

Since the principle of direct effect was first established by the Court of Justice in the case of Van Gend en Loos [1963] ECR 1, there has been a substantial amount of further case law from the Court on whether or not provisions of Community law have direct effect.  The basic rule is that for provisions to be directly effective they must be clear, they must not depend on further intervention of the member states and they must be unconditional.  Article 12 of the EC Treaty which was referred to in the case in question has been held to be directly effective, thus conferring rights on individuals – Walrave and Koch v Association Union Cycliste Internationale [1975] ECR 1405.  The Court of Justice has in the past also considered Article 12 in relation to the issue of security for costs; these cases include Boussac Saint-Freres SA v Brigitte Gerstenmeier [1980] ECR I-3427; Hubbard v Hamburger [1993] ECR I-3777; Mund and Fester v Hatrex International Transport [1994] ECR I-467; Data Delecta AB v MSL Dynamics Ltd [1996] ECR I-4661; Hayes v Kronenberger [1997] ECR I-1171; and Saldanha v Hiross Holding AG [1997] ECR I-5325.

In order to protect the rights given to individuals by Community law, courts in member states have an obligation to disapply any provisions of national law in so far as these national rules contravene principles or provisions of Community law and deprive individuals of their rights (R v Secretary of State for Transport, ex parte Factortame (No 2) [1991] AC 603 and Amministrazione dello Stato v Simmenthal [1978] ECR 629, at 643).

Earlier this year, the Society and the Faculty of Advocates (with financial support from the European Commission) ran a very successful course of seminars entitled “European Law in Everyday Practice” which aimed to raise awareness among practitioners in Scotland of the ways in which Community law could arise in all areas of Scots law; the case referred to above demonstrates amply that Community law is an area which practitioners ignore at their peril.  The Society and the Faculty will soon be running a second series of “European Law in Everyday Practice” seminars; this will include seminars on enforcing Community law rights in Scotland.  Details of the seminars will appear in forthcoming issues of The Journal.  In the meantime you may wish to have a look at the “European Law in Everyday Practice” website http://www.eurolawscot.co.uk where you will find copies of some of the papers from the seminars held earlier this year. 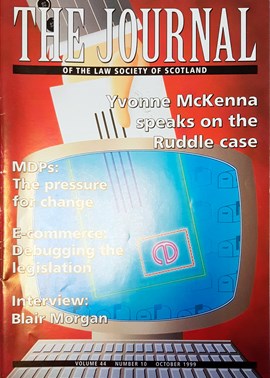