Negligence claims against solicitors continue and will continue.  There may be a perception that lost chance cases or what some would call “loss of opportunity” claims are a recent development.  However, it has long been the law of Scotland that damages can be awarded for the loss of a chance.  What requires to be distinguished is the loss of a chance which, in itself, is a legal right – for example, the chance to pursue or defend a court action – and the chance of achieving some other benefit which may be too speculative to be taken into account by the courts.  This article attempts to look briefly at some practical examples of loss of chance cases which have arisen, or may arise, out of solicitors’ negligence, and assesses the courts’ current approach at evaluating the loss of a chance, with particular reference to Scottish cases.

There are a wide variety of situations which may give rise to a loss of chance.  As a result of an oversight by a solicitor a client may be unable to proceed with the purchase of heritable property.  Erroneous advice may be given by a solicitor to his client and a property purchase may prove to be less valuable than was assumed at the date of purchase.  A solicitor may fail to timeously assign an interest in an agricultural tenancy following the death of a tenant, this resulting the landlord evicting the tenant’s successors from the farm.  Numerous claims have arisen in England under Part II of the Landlord & Tenant Act 1954 where a tenant’s solicitor fails to give notice or issue proceedings within specified time limits thus leading to forfeiture of the right to a renewal of the tenancy.

Most commonly, courts have been required to evaluate the loss of a chance where, through solicitors’ negligence, the client has lost the chance to either bring or defend proceedings.  In an earlier English case, Kitchen v Royal Airforce Association [1958] 2 All ER 241 (a case based on breach of contract) a solicitor failed to issue a writ within the limitation period.  The plaintiff’s husband, who had been at home on leave, had been electrocuted and died in the kitchen of his house.  The plaintiff alleged that the death was caused due to poor wiring carried out by the local electricity company.  The plaintiff had consulted her husband’s employers, Royal Air Force, who had referred her case to solicitors who thereafter allowed the time for proceedings to be raised to run out.  The plaintiff sued her husband’s employers and the solicitors for damages as she was unable to pursue her claim.  There was no doubt but that the loss was caused by the solicitors’ negligence and the only argument related to quantification of her claim.  Although it was argued on behalf of the solicitors that the plaintiff may not have won her case, and may therefore have lost nothing, the court held that she had lost a chance and, as this was a valuable right, she should be compensated for it.

Kitchen has been allowed in Scotland and was cited by Lord Avonside in Yeoman’s Executrix v Ferries 1967 SLT 332.  In this case an injured employee who fell off a ladder sued his solicitor who had failed to raise proceedings against the employers timeously.  Although Lord Avonside held that liability had not been established against the employers, as the employee would not have used safety precautions even had they been provided, he went on to make an award in favour of the pursuer in respect of his lost chance to win.

It is accepted that a client is entitled to sue his solicitor in either contract or delict and normally in practice a claim proceeds under both heads.  In Kyle v P &J Stormonth Darling 1994 SLT 191 the defender solicitors had failed to comply with a rule of court and an appeal to the Court of Session was held to be abandoned.  It was argued on behalf of the defender solicitors that the loss of the right to pursue the appeal was not a legal wrong.  However, the Inner House held that losing the right to proceed with the appeal was sufficient to constitute a legal right.  Lord McCluskey, issuing the Opinion confirmed Lord Avonside’s Opinion in Yeoman’s Executrix v Ferries that in a question with a negligent solicitor the court has to look at the value of the lost chance to make a claim and that “chance” is synonymous with “opportunity” or “prospect”.  Kyle is authority for the proposition that a pursuer can advance a claim providing that it has an ascertainable value, even although the solicitor’s negligence has not caused a pursuer to lose a claim, but instead has caused a pursuer to lose a claim, but instead has caused the pursuer to lose the right to advance his claim.  By comparison in an earlier Scottish case Siraj-Eldin v Campbell, Middleton, Burness & Dickson 1988 SC 204 an offshore engineer who instructed his solicitor to pursue an application for unfair dismissal was unsuccessful in his negligence claim against his solicitors.  He had been dismissed fir bringing alcohol onto an offshore rig.  The Inner House took the view that the employers would not have settled with the employee and that an industrial tribunal would have refused his application.

Where the client has lost the chance to bring or defend proceedings then a practice has emerged whereby damages are assessed accordingly to a hypothesis and then scaled down accordingly to the probability that the hypothesis is correct.  In such cases there is a mistaken belief that the solicitors defending a claim step into the shoes of the original defender who is, of course, not a party to the solicitor’s negligence action but who nonetheless may be called to give evidence.  In such cases it is often necessary for the court to assess the notional date of proof.  If the claim related to a personal injuries action then it is the figure appropriate as at the national date of proof that is relevant and not the figure which prevails at the date of the negligence action.  This follows the approach adopted in Kitchen, where the plaintiff was awarded two thirds of the value of the original claim representing the chance that her claim would have been successful.

It is often necessary for the court to speculate as to what would have happened had the negligent solicitor properly discharged his duty.  The court has to compare the position of the pursuer following the solicitors’ negligence with what his or her position would have been had there been no negligence.  While what has actually happened may be fairly easy to prove, what would or might have happened in other circumstances is a different matter.  What if the agricultural tenant referred to previously had entered into conditional missives prior to the death with a building company in respect of the proposed development of part of the farm lands subject to planning permission being granted? And how would the court actually assess the loss of a chance of his successors if, at the time of proof, planning permission – although still not granted – was likely to be granted at some indefinite point in the future? In this situation the court has to consider evaluation of the chance of the basis that “but for” the solicitors, negligence, a third party such as the planning authority in this example would have acted differently.

The decision in Allied Maples was followed in Stovold v Barlows [1996] PNLR 91 where a solicitor acting for a vendor failed to send documents to a purchaser resulting in the plaintiff losing his chance to sell property at a higher price.  Interestingly, the deeds had been sent by DX when the purchaser’s solicitors were not on DX – a salutary lesson to us all! However, damaged in this case were reduced by 50% as the court held that the purchaser may have bought other property even if the documents had arrived on time.

The case of First Interstate Bank of California v Cohen Arnold & Co [1996] PNLR 17 was a negligence case which involved accountants rather than solicitors.  It is worth a mention here because the court gave practical guidance as to how the monetary value of the loss of a substantial chance can be valued.  The plaintiff bank had loaned money to a client of the defendant accountants who negligently overstated the net worth of their clients.  The plaintiff bank had been concerned about the amount of the loan outstanding.  Replying on the representations made by the defendant accountants, the plaintiff bank delayed in calling in the loan and thereafter marketing the property for sale.  The price ultimately obtained for the property was £1.45 million whereas the plaintiff bank contended that had it not been for the misrepresentation they could have sold is for £3 million.  The Court of Appeal held that the loss of a real or substantial, as opposed to a speculative chance, was a loss which the law of tort could and would recognise.  In the facts of that case, the court valued the chance at 66.66% on the assumption that “but for” the negligence, the property would actually have been sold for 66.66% of £3 million.  First Interstate relied on the Allied Maples insistence that damaged for a lost chance are only recoverable if the lost chance is real or significant.

There is a growing tendency for courts in solicitor negligence cases to favour the pursuer when considering what would have happened of the solicitor had properly performed his or her duty.  Although lost chance cases may occur most frequently in respect of solicitors’ negligence, they can also arise in other situations and should therefore be borne in mind when representing any client who had sustained loss or damage, perhaps most frequently where medical negligence is involved and where there is a loss of a chance of recovery of health by failure treat adequately or timeously.  Although a sol8citor’s negligence may not have actually caused a pursuer to lose his claim, the loss of the right or advance a claim is sufficient, provided that the claim is ascertainable.  There must be loss of a real and substantial chance.  Mere nuisance value will not be sufficient.  As claims against solicitors continue and are unlikely to decrease as we enter the 21st century, it is likely that there will be more reported decisions on this subject in the near future.

Alison Grant is a Litigation Assistant with Biggart Baillie 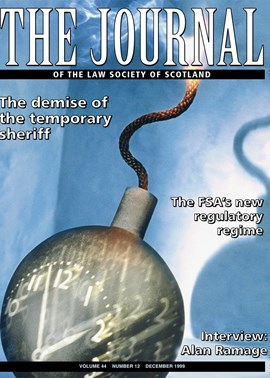