Counsel for the Trident protesters takes issue with previous article by Professor Rebecca Wallace following the sheriff's decision in the case against the protesters (and see reply, Vol.45 Iss.2, page
1st January 2000 | John Mayer
On the cover of Volume 44, Number 11 of November 1999 The Journal of the Law Society of Scotland ran a banner headline against the backdrop of a nuclear submarine at sea saying “Verdict on the Trident Case” which gave the clear impression that the final word of authority in the case of HM Advocate v Zelter & Ors otherwise known as the “Trident Three” had been handed down.  The “verdict” was an article by Professor Rebecca M. M. Wallace of Napier University entitled “How the ‘Trident’ sheriff got it wrong”.

My purpose is to demonstrate how Professor Wallace committed several cardinal legal sins.  It is submitted firstly that she failed to avail herself of the facts before making any submission.  That would be a fatal failure of itself but when allied to her second error, of assuming what a court said rather than waiting for the written judgment, and against that illusory background going on to “extrapolate” is akin to the kind of overkill which Trident is designed to achieve.

Professor Wallace firstly fell into the basic trap which snared the other academics who appeared on television and the press in those highly charged few days after Sheriff Gimblett’s judgment.  None of them was in court for the month of evidence, or my all-day submission, or the two-hour reading of Sheriff Gimblett’s judgment.  The professor makes no mention of either the charges or the facts of this criminal case anywhere in her article.  That will no doubt be because, not having been in court and at the time of writing there being no written judgment, she does not know them.  For instance, she makes no mention of the important matters contained in no less than six Joint Minutes agreed by the prosecution and defence and read out in open court by the Clerk.  Instead she predicates herself by stating that the sheriff “allegedly founded her decision” (Para 3).  The professor then boldly and entirely wrongly bases her comments in what she assumes to be the foundation of the defence; namely a “sincere belief” by the accused that nuclear weapons are a bad thing (Col 1), that the accused’s position was periled upon the “moral force” (Col 2) of what they did on 8th June 1999, leading to the conclusion that all this case amounted to was the “romantic martyrdom of a few individuals”.  It is just as well that this article was merely the work of one academic, for if it were a real judgment, it would not only be dangerous but also attract deep shame upon the good name of Scottish legal analysis.

At an early stage in the Crown Case, Sheriff Gimblett asked me, given the recent ruling by the High Court in the “Helen John” case, what the defence was to be.  I began my response by immediately distinguishing that case on the basis that “hopes, dreams and even sincere beliefs were no basis for a defence in a court of criminal law”.  Instead what was to be demonstrated by the defence was an “objective understanding” of the facts and law surrounding the deployment of the British Trident Nuclear Submarine Fleet and its attendant support systems.  That would necessarily have to be established by both the accused themselves and by experts of the very highest calibre.  That having been done, at the end of the defence case, a submission would be made to the effect that (1) the deployment by HMG of Trident is in clear violation of international law and thus Scots Law (2) in the particular circumstances of this case, these accused could be regarded as having taken all necessary legal steps to bring that violation to the attention of the legal and political authorities only to be met with intransigence (3) that in the face of the “constant danger” posed by Trident the accused, having done what they could, when they could, to prevent this ongoing war-crime, had no alternative in the public interest but to exercise their legal right to prevent that major crime from continuing (4) the accused were therefore acting wilfully but not maliciously in disarming an essential part of the support structure for Trident.  Professor Wallace will be inter-alia unaware that the first accused, Angie Zelter, after years of tireless effort at international level, was, as part of the World Court Project, amongst those responsible for motivating enough United Nations Ambassadors to Move the UN to seek the Advisory Opinion of the International Court of Justice (ICJ) in the first place.  As every schoolboy now knows, that effort was successful.

Secondly, the professor goes on to approach her legal development in the same way that her colleagues on television did it, namely backwards.  It is one thing for journalists to focus on the sound-bite term “World Court” and to get their “analysis” entirely the wrong way round. It is quite another for an (academic) lawyer to do it in print.  The proverbial schoolboys knew from the press two days after the judgment that the submission which Sheriff Gimblett upheld was based primarily upon clear violation by the British Government of the Nuremberg Principles and subsequent Charter.  In the present legal climate of “New Human Rights” it is most noteworthy to remember that there are certain Old Human Rights which were promulgated for the highest of reasons and to get the two quite clear.

Article 6 (a) [of the Nuremberg Principles] defines “Crime Against Peace” as “planning, preparation, initiating or waging of a war of aggression, or a war in violation of international treaties, agreements or assurances, or participation in a common plan or conspiracy for the accomplishment of any of the foregoing”.

Article 6 (b) defines the term “War Crime” to include “murder, ill-treatment or deportation to slave labour or for any other purpose, of civilian population of or in occupied territory, murder or ill-treatment of prisoners of war or persons on the seas, killing of hostages, plunder of public or private property, wanton destruction of cities, towns or villages, or devastation not justified by military necessity”.

Article 6 (c) defines the term “Crime Against Humanity” to include “murder, extermination, enslavement, deportation and other inhumane acts committed against any civilian population.”  Following upon the atrocities by the Nazis during the Second World War these provisions became the core of the founding legal document for the United Nations, thus forming the basis of protection against annihilation for all mankind in new World Order.  At this point it is worth noting that The Scotland Act 1998 provides that “Control of nuclear, biological and chemical weapons and other weapons of mass destruction” is a reserved matter.  (Reserved Matters - Schedule 5, Part 2, Head L - Miscellaneous, Section L3).  Mass destruction is inter-alia exactly what Article 6 outlaws.

I discussed the subsequent Geneva Conventions and Protocols flowing from the Nuremberg Principles and which formed part of the material considered by the ICJ.  I thereby led chronologically up to and made certain references within the ICJ Advisory Opinion but stressed that if the United Nations had never requested that Opinion the argument which drove the sheriff to the inescapable conclusion that the accused were, in the particular circumstances of this case, not guilty of the charges on the Indictment remained.  It is a matter of regret when an author makes legal comment on a criminal case with no knowledge of the Indictment or the facts and then relies upon what can be described as a consolidation of the law, namely the ICJ Opinion, rather than referring to the substantive provisions.  That is not only intellectually reprehensible but is also to conveniently skip the terms of the most powerful law in the world.

It is submitted that the professor goes further into the mire when she states, having earlier accepted that all she had to go on was an “alleged” foundation for the Sheriff’s Opinion, that it is “important to extrapolate the conclusions reached by the court in the context of the contemporary international nuclear debate” (Col 3).  It is submitted that such “extrapolation” is again not only misconceived by being premature but is also dangerous.  The Courts will no doubt ignore her article but as an academic, certain students in her department are likely to follow what she says.  We await their articles with apprehension and trust they will not follow careers in the military. 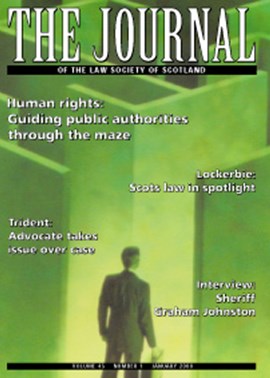