The following represents a personal selection of decisions which have recently been reported which may be of some interest.

In McCall v Dumfries and Galloway Rugby Football Club and Another 1999 SCLR 977 an action for reparation was raised by a club member against inter alia the Club.  The First Defenders were an unincorporated association and it was argued that as such had no separate legal persona from that of the members and accordingly the Pursuer as he was a member was effectively both creditor and debtor.  Sheriff Barr decided on the point of competency that simply because the Pursuer was a member of the club did not mean in effect that he was suing himself.  To take that line ignored the fact that there were other members of the club and it could be argued that the Pursuer was suing himself as there was no complete identity between the Pursuer and the Defenders.

In Waydale Limited v D.H.L. Holdings (UK) Ltd 2000 GWD 1-7 the point at issue was whether a Decree of Dismissal could be the basis of a successful plea of res judicata.  The Inner House held by reference to previous authority that whilst in many cases a decision reached at Debate was in effect a decision on the substance of the case, for the sake of clarity it was necessary to hold that a plea of res judicata would not be founded on a Decree of Dismissal.  In MacKay v Scottish & Southern Energy Plc, 2000 GWD 12-444 a plea of res judicata was taken in respect of certain averments which had appeared in a previous action for defamation, the present action being one based on employer’s liability.  Sheriff Reith held that a plea of res judicata limited to only certain averments, was inappropriate.

An interesting aside arose in the case of Crooks v Haddow 2000 GWD 10-367.  In an action for negligence it was argued that the dismissal of a case on the grounds of irrelevancy breached Article 6 of the European Convention.  The Inner House held that the dismissal of the action on the basis of irrelevant pleadings having followed a full consideration of the pleadings, could not be considered a breach of the Pursuer’s right to a fair and public hearing by an independent and impartial tribunal.

Branson v Skinner 2000 GWD 4-149 Sheriff Principal Nicholson recalled a Decision of the sheriff at first instance in relation to expenses when the Minute of Tender had been beaten only as a result of the operation of interest upon the sheriff’s award.  The sheriff principal held that the operation of interest required to be taken into account in deciding whether a Tender had been beaten or not and in the present case where there was no suggestion that the Pursuer had protracted the litigation, the Tender having been beaten, expenses should be awarded to the Pursuer.  In Laing v Scottish Arts Council 2000 SLT 338 the Pursuer during a Proof accepted a Minute of Tender without any prior intimation of the Defender and moved for Decree in terms of the Minute of Tender and Acceptance. The Defenders did not move at that time for the expenses of the action from the date the Tender was lodged until it was accepted.  They subsequently enrolled a Motion for such a finding in expenses.  It was argued that the Lord Ordinary was functus having pronounced Decree in terms of the Minute of Tender and Acceptance and accordingly the Defenders could not in effect re-open that Interlocutor.  Lord Penrose indicated that the unusual circumstances of the case however allowed the Interlocutor to be altered and granted the Defender’s Motion for expenses.  Having regard to the date the Tender was lodged, and when the Tender was accepted, it called for a counter Motion for expenses on the part of the Defenders and had been anticipated by the Pursuers.  In the circumstances the Defenders having been taken by surprise by the Minute of Acceptance of Tender being lodged without prior intimation, justice required relief to be given from the consequences of a single mistake by the Defenders overlooking to move the appropriate award of expenses at the time.  It has to be expressed however that normally any counter Motion by the Defender for expenses when a Minute of Tender is accepted requires to be argued at the time of Decree is moved for in terms of the Minute of Tender and Acceptance, the consequences are failure being seen all too clearly in Wilson v Pilgrim Systems Plc 1993 SLT 1252.

In the case of Dixon v Ban der Watering 2000 GWD 12-409 raised the question of whether settlement had been affected.  An agreement appeared to have been reached to settle an action resulting in a Proof being discharged on the morning.  Allegations were made that the Pursuer had induced settlement as a result of misrepresentation and also questions arose as to whether the terms of settlement were sufficiently clear.  In those circumstances Lord Bonomy ordered the parties to proceed by way of Minute and Answers to set out their position clearly.  Reference to this case is worthy, simply to reiterate this procedure in such unfortunate circumstances.  A further observation made by Lord Bonomy namely that if settlement is achieved on the morning of a Proof, the case should be disposed of then and there rather than by final procedure, perhaps it is also worthy of note.  How often does this happen in the Sheriff Court?

In Osborne v BBC 2000 SLT 150 the competency of an appeal was questioned following the grant of interim interdict.  At the Hearing at first instance, the Lord Ordinary had indicated that he was prepared to grant interim interdict and thereafter the precise terms of the Interlocutor were discussed by Counsel on both sides at the invitation of the Lord Ordinary.  In those circumstances, it was held that this did not constitute consent to the Interlocutor granting interim interdict and accordingly the appeal was competent.  It might be suggested that this decision gives further support to the argument that it is only if the Interlocutor actually bears to be of consent that any appeal against the Interlocutor is incompetent.  Perhaps this is of some significance bearing in mind the terms of the decision in McCue v Scottish Daily Record and Another 1998 SLT 983 relating to an appeal opening up for review prior Interlocutors.  It is important to ensure that the Interlocutor which is appealed is not recorded as being of consent although it may be unopposed.

Decree in foro or decree in absence

In Petition by George Saunders 1999 SCLR 1131, an interesting observation arose as a result of the unusual circumstances in the preceding litigation.  An action for reparation had been raised against the Trustee in Sequestration of two individuals.

The Trustee had lodged Defences.  The Pursuer had thereafter been allowed to amend to delete the Trustee from the action and substitute the two individuals.  Eventually after a newspaper Citation Decree was granted against the two individuals.  Subsequently the individuals’ Insurers applied to repone the Decree granted against the individuals and this Reponing Note was granted.  The question arose as to whether a Reponing Note had been competent.  Lord MacLean had no difficulty in holding that notwithstanding Defences had been lodged by the Trustee in Sequestration, the true nature of the Decree against the named individuals was a Decree in absence and accordingly a Reponing Note had been competently granted.

In Alexandra v Murphy 2000 GWD 4-513 Sheriff Principal Risk granted an appeal against an interlocutor granting a non-harassment Order ad interim on the basis that the Defender required to be given an opportunity to be heard in order inter alia to assess the Defences in terms of Section 8(4) of the Protection from Harassment Act 1997.  He further indicated that he did not consider it competent to grant an interim non-harassment Order.  He further indicated that having regard to the terms of Section 8 of the Act, the Pursuer in attempting to obtain a non-harassment Order had to establish a course of conduct had occurred amounting to harassment and the Defender had to have the opportunity to answer this.  This could only occur after Proof but in the meantime protection could be granted by means of an interim interdict with the sheriff after Proof deciding whether interdict or a non harassment Order was appropriate.  If such a course were followed the Craves for interdict and a non-harassment Order had to be alternative.  In Grant v Grant 2000 GWD 5-177 the issue of the confidentiality of the views of a child arose.  Sheriff Principal Risk deferred his views as to whether a Section 11(7) of the Children (Scotland) Act created a right of confidentiality, but if it did observed that the creation of such a right created difficulties in resolving a right with the right to parties disclosure.  He further suggested that it was important that certain principles were laid down on this point, rather than each case being decided for its particular facts as this only caused uncertainty.

It is hoped as usual, that the foregoing are of interest to practitioners wrestling with the day to day hurly burly of Civil Litigation in the Sheriff Court! 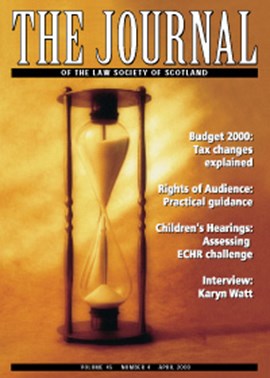