Interview with Clive Fairweather, Chief Inspector of Prisons in Scotland, on how the European Convention on Human Right can improve the lot of the remand prisoner
1st June 2000 | Roger Mackenzie

IT has long been an incongruity of Scotland’s prisons that those on remand are subjected to poorer conditions than their convicted counterparts.

Confronting that anomaly, the recent Report, Punishment First -Verdict Later? issued by the Scottish Prisons Inspectorate, suggests that “given the presumption of innocence or their legal status as unsentenced prisoners, we recommend that the conditions in which remand prisoners are held should be the best available in the relevant establishment.”

The Report’s author, Chief Inspector of Prisons in Scotland, Clive Fairweather, said there has been considerable progress made in recent years to address that situation. “There has been a move in recent years by the Scottish Prison Service to shift the focus on remand prisoners where in the past they were the most universally disadvantaged group. Prisons were too busy dealing with overcrowding and basically had to make a choice between convicted and remand prisoners. By my own logic it seems cock-eyed that a person who has been convicted of committing a crime enjoys better conditions than someone who is presumed innocent.”

Further impetus has been provided by the European Convention on Human Rights, which Fairweather suggests is a “window of opportunity” for prisons to ensure conditions are “decent and equitable”.

“Prison authorities are keen to improve things off their own bat and the present climate, where people are interested in human rights and prisons aren’t suffering from overcrowding, seems ideal to facilitate change.”

Nevertheless it seems likely that the Convention might dictate a scale and speed of change with which prison authorities cannot keep up and the public might balk.

Already there has been a challenge made to the practice of “slopping out”, described recently in the Scottish Parliament as the “Victorian nightmare” by Dorothy Grace-Elder, the argument being that it violates the article three prohibition of “inhuman or degrading treatment or punishment”.

“We can’t answer that until it comes to a court of law; and even then they will have to decide which aspect is inhuman or degrading: is it the use of the potty itself or is it the fact of defecating in front of someone else,” said Fairweather.

There’s also been recent suggestion that seriously ill prisoners might be released under the terms of the same article, due to the inadequacy of prison hospitals, and other Convention articles relevant to prison life could include the article 8 right to respect for family life and perhaps more significantly article 14’s prohibition of discrimination, with the possibility that a prisoner could argue that a sentence of parallel length is in fact more severe if he is serving it at a prison where conditions are poorer.

Ironically, Barlinnie, the only prison where slopping out still occurs, and is expected to continue to do so for five years, probably comes out on top in terms of keeping prisoners in contact with due process, according to Fairweather.

“Our review shows that many remand prisoners encounter obstacles when trying to exercise their basic rights, which may affect the outcome of their case. For example, the appropriate legal reference books may not be available, or if they are, there may not be enough of them. In addition, access to lawyers by telephone is often difficult. Some of the facilities set aside for agents’ visits were shabby, cramped or insufficiently soundproofed, while the facilities at Barlinnie were particularly good and set  the standard for others to achieve.

“Lawyers also referred to the frustrations involved in travelling long distances to meet with clients, only to find that they had not been informed of the individual’s transfer.

“Overall, it would appear there is a requirement for regimes more properly to reflect the ability of prisoners and lawyers to meet. The outcome must be that each individual on remand is treated in accordance with the principles of natural justice”.

As a former Army officer, Fairweather was charged with the task of administering summary justice to 600 soldiers. Would he like to have been subject to the European Convention during that time?

“While I am fascinated by ECHR in relation to possibly improving conditions, my own view for what it’s worth is that I’m more interested in the community aspect of law and its effect on the overall good of the community rather than being solely preoccupied with rights of individuals”. 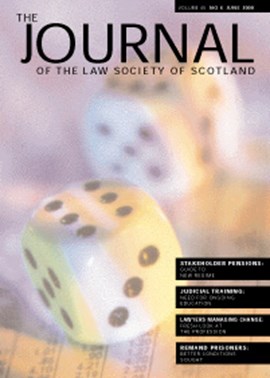