One of the main criticisms solicitors have of the current conveyancing process is that there is a plethora of different instructions issued by mortgage lenders. In practice, many of the instructions are very similar, however conveyancers have to make sure that they are following the correct instructions in each case. To address this position, on 2 October 2000 the Council of Mortgage Lenders will introduce the CML Lenders’ Handbook for Scotland. The handbook introduces standardised instructions for conveyancers in domestic conveyancing transactions.

The Lenders’ Handbook is designed to provide solicitors and independent qualified conveyancers with comprehensive instructions setting out what lenders expect conveyancers to do when acting for them. These standardised instructions have been drafted following extensive consultation with the Law Society of Scotland. The handbook is divided into two sections. Part 1 sets out the main instructions to conveyancers, including what searches and enquiries must be carried out, the need for good and marketable title and a first ranking standard security, requirements for new properties, roads and sewers and the release of retentions. The handbook also deals with transactions during the life of a mortgage such as requests for title deeds, transfers of equity and deeds of restriction or servitude.

Part 2 of the handbook details the individual requirements of each lender adopting the handbook which arise from those instructions, for example, contact points should issues arise as part of the conveyance or policy matters such as whether the lender would accept search insurance. The Part 2s for 19 lenders in Scotland are printed with the Handbook. All other lenders adopting the Handbook will advise panel firms direct of their Part 2 requirements. Over time, it is anticipated that the differences in lenders’ requirements will diminish, so reducing the need for Part 2 of the handbook apart from separate contact points for queries.

During the first two weeks of August each firm of solicitors and qualified conveyancers will have received three copies of the Handbook. Those firms which require additional copies and have access to the Internet are encouraged to download the handbook from the CML website (www.cml.org.uk). Conveyancers will need to read the handbook as well as ensure that any procedural changes, where necessary, are put into place. The handbook is intended to be a flexible document to the extent that amendments will no doubt be required over time taking into account changes to both lending and legal practice. The profession will be advised of any amendments via updated versions of the handbook and will be available via the CML website.

The handbook for Scotland is the second in a series of standardised conveyancing instructions which have been produced by the CML. In October 1999, a handbook for England and Wales was introduced which is currently used by over 90 lenders which together represent over 95% of the residential lending market. The handbook was prompted by a change to the Solicitors’ Practice Rules in England and Wales which sought to restrict the parameters within which solicitors could act for both lenders and borrowers on the basis that there was an inherent conflict of interest. Lenders disputed this assertion but it was clear that the profession wanted to implement change in a bid to reduce the high level of conveyancing negligence claims which has been made on the Solicitors’ Indemnity Fund.

In parallel to the discussions between the CML and the English Law Society on the rule change, the CML drafted standard instructions to comply with the revised rule. The proposed changes left lenders with no alternative but to review their instructions. The introduction of the handbook meant that a significant duplication of effort was avoided for both lenders and conveyancers, who would otherwise have been faced with new instructions from each mortgage lender. The handbook has been broadly welcomed by the profession and while it is too early to see if it has an impact on reducing negligence claims, conveyancers now have clear instructions which are common amongst lenders.

Following on from both the English and Scottish Handbooks, standard instructions for the Isle of Man will be introduced in the autumn and discussions are progressing with the Law Society of Northern Ireland on a further handbook for the Province. For mortgage lenders which lend across the UK, this will eventually meant that uniform instructions will apply across the board apart from the differences in legal procedures. As more lenders sign up to the handbooks, this should hopefully make the conveyancer’s role more streamlined as the burden of differing instructions diminishes. 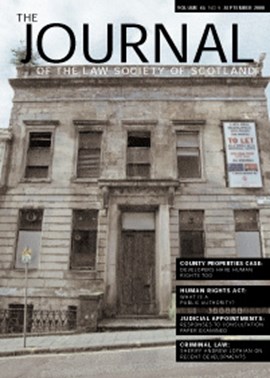