The Society’s Brussels Office has recently issued the latest of its six-monthly reports. The report gives the up-to-date position on a variety of EU policy areas including employment, competition, consumer law, electronic commerce, whether relating to Commission proposals for legislation, negotiations on-going between Member States or significant rulings by the European Court of Justice. It also contains hyperlinks to the relevant EU texts for further information. Here we give an outline of some of the significant development in EU employment law contained in the report.

In its ‘anti-discrimination package’ (http://europa.eu.int/comm/employment_social/fundamri/news/article13_en.htm), adopted in November 1999, the Commission put forward the position that legislation alone is not sufficient to combat discrimination and outlined other initiatives being taken at Community level such as a programme of action to combat social exclusion and a Communication on victims of crime.

This package of measures includes proposals for two Directives and a Community Action Programme for 2001-2006. The first of these Directives (2000/43/EC) (http://www.europa.eu.int/eur-lex/en/lif/dat/2000/en_300L0043.html) was adopted in July 2000 and implements the principle of equal treatment between persons irrespective of racial or ethnic origin. The second proposal is for a Directive establishing a general framework for equal treatment in employment and occupation. This covers other forms of discrimination such as discrimination on grounds of sexual orientation, age and religion - but only at work (http://europa.eu.int/eur-lex/en/com/dat/1999/en_599PC0565.html).

The draft Directive sets out broad principles and allows Member States some latitude in their implementation. For example, some States may deal with discrimination as a criminal offence, whereas in other States it may attract only civil liability in the form of an obligation to pay compensation. There may also be exemptions - for example, employers may be able to argue that jobs which require a large amount of costly training are unsuitable for people nearing retirement age

Member States have 3 years in which to implement the Directive, although the UK managed to negotiate an extra three years for disability and age if necessary. The UK would however have to justify this delay in an annual report submitted to the Commission.

On 7 June 2000 the Commission published a proposal for a Directive amending Directive 76/207/EEC on the implementation of the principle of equal treatment for men and women as regards access to employment, vocational training and working conditions (http://www.europa.eu.int/eur-lex/en/com/pdf/2000/en_500PC0334.pdf). The proposal includes a first definition of sexual harassment in the workplace:

“Sexual harassment shall be deemed to be discrimination on the grounds of sex at the workplace when an unwanted conduct relating to sex takes place with the purposes or effect of affecting the dignity of a person and/or creating an intimidating, hostile, offensive or disturbing environment, in particular if a person’s rejection of, or submission to, such conduct is used as a basis for a decision which affects that person”

The procedure being followed is the co-decision procedure (where both the Council and the Parliament have an equal say). A first consideration of the draft report will take place either in January or February 2001 and the adoption of the draft report is currently scheduled to be either in February or March. The first reading of the proposal should take place at the Parliament’s plenary session in Strasbourg in April 2001.

In November 1998 the Commission put forward a proposal for a Directive establishing a general framework for informing and consulting employees in the European Union (http://europa.eu.int/eur-lex/en/com/dat/1998/en_598PC0612.html). The proposal applies to all enterprises with a minimum of 50 employees, regardless of whether or not they are based in one Member State only, and requires them to inform and consult their employees in good time about issues directly affecting work organisation and their employment contracts.

The European Parliament’s position is that the Directive should also cover smaller enterprises with fewer than 50 employees. However, certain countries (eg Spain and Germany) are opposed to this proposal and the UK would prefer a more indirect approach to the subject, i.e., for there to be general objectives to be achieved, rather than specific targets.

There was speculation that the Council would find it difficult to reach a common position and adopt a text, as there is much opposition to the proposed text, notably from the UK and Ireland. The basis of their argument is that the proposal is contrary to the principle of subsidiarity. They have also argued that the threshold of workers for companies is too low. The Council of Ministers did not reach an agreement at their meeting on 29 November and negotiations to reach a compromise are ongoing.

In 1993, the EC working time Directive (93/104/EC) (http://europa.eu.int/eur-lex/en/lif/dat/1993/en_393L0104.html) was adopted. The Directive was transposed into UK law in 1998 by the Working Time Regulations which limit the average working week to 48 hours. In November 1998, the Commission adopted four proposals to protect those workers not currently covered by the 1993 Directive:

The Commission also has to review the operation of the provisions regarding workers concerned with the carriage of passengers on regular urban transport services by no later than 1 August 2005. Member States will have three years in which to transpose the Directive into their national law, followed by a staggered period of up to nine years for the implementation of the working time provisions for trainee doctors.

The report can be found in the International Relations section of the Society’s website (www.lawscot.org.uk).

A copy can also be obtained from Sarah Fleming at the Society. 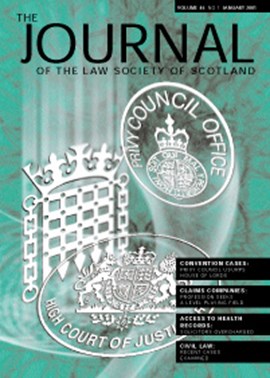