The first World Women Lawyers Conference, organised by the International Bar Association, was held in London in March.

The conference brought together delegates from all over the world to discuss issues of diversity, the role of women in the legal profession, and access to the legal profession. Mary Macrae, Council Member, and Sarah Fleming, Head of International Relations, attended the event on behalf of the Society.

Over 800 lawyers from over 70 countries attended the two-day conference, which was one of the major legal conferences of the year; countries from Nepal to Nigeria and South Africa to Sweden were represented. As expected, the vast majority of the delegates were women, although a number of male delegates also participated. The conference was the particular project of the present IBA President, Dianna Kempe, the first female leader of the Association, and its aim was to explore the diverse issues facing women in the legal profession today. The organisation of such an enormous event and the task of making it relevant for lawyers of the very different backgrounds represented at the conference was colossal. Clearly, the problems facing women in the legal profession vary from country to country. However, the conference proved very successful in finding common ground in many areas and emphasising the importance of access to the legal profession – in all countries.

The first session united all 800 delegates for a plenary discussion where a number of distinguished guests considered the question of “Women’s rights as human rights”. The Advocate General, Lynda Clark, QC, provided a Scottish voice and, in an inspirational address, Cheryl Carolus, the South African ambassador to the UK, spoke of her experience as a woman in a position of power in South Africa under the post-apartheid regime. The subject of “Woman, Islam and the law” provided the focus of a further plenary session. Presentations were made on work being done to improve the lot of women in Pakistan - especially in relation to access to education - the development of women’s legal rights in Iran, and the position of women in Afghanistan under the Taliban regime, where education for women is restricted and access to professions impossible. Delegates made the most of the session to exchange views and a lively discussion took place regarding the nature of Islamic law and its application to women.

The main part of the conference comprised a number of sessions dealing with a range of issues, such as access to employment for women; the impact of debt on women and families; children’s inheritance rights; in-house lawyers in the new economy; banking, finance and capital markets; and the energy industry’s relation with the environment. In a session on the use of distance learning and continuing education to allow better access of women to the legal profession, Fiona Raitt, head of the Department of Law at Dundee University gave a presentation on the use of formal and informal networks to improve the position of women at work. The session also included a presentation on the use of online universities to provide flexible access to tertiary education, such as the Universitat Oberta de Catalunya (www.uoc.es) which operates on an entirely “virtual” basis.

Other sessions included wide-ranging surveys of women’s rights in the workplace (revealing that the most generous maternity provisions exist in the Nordic countries and Colombia), the approach of women to ethical business practices, and the position of women in the judiciary.

This conference made a serious attempt to bring lawyers together to discuss questions of common concern to women in the legal profession worldwide. This was no easy task, but the goal was achieved, with subjects tackled provoking much interesting debate and comment, with the result that delegates hoped that it may become a more regular feature of the IBA conference programme in the future.

Further IBA conferences in the near future: 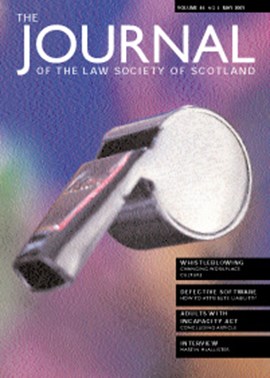