Complainer is the loser in delay cases

Latest criminal cases, including trial within a trial; delay; sentencing; plea in bar of trial; Moorov rule
1st June 2001 | Andrew Lothian
It used to be said that it was only academic lawyers who thought that there were ever much more than factual difficulties in the average criminal trial. A glance at recent reports suggests that the situation is not quite as straightforward as that. This train of thought is prompted to an extent by a re-reading of Sir Gerald Gordon’s piece on corroboration in “Justice and Crime”, the 1993 festschrift in honour of Lord Emslie. Could it be that there is no satisfactory unified theory on corroboration and that it is all a bit ad hoc?

On this tricky topic there are a couple of cases in 20001 GWD 10. Kerr v HMA (332) revisits the topic of corroboration by means of the distress of the victim, which, it is emphasised, is not apt to corroborate the details of an assault but may in the whole circumstances help the jury to interpret and thus choose between competing accounts put forward by those principally involved. Keegan v McFadyen (333) is a case in which it was held on appeal that the principal witness could be corroborated by facts and circumstances which included a second witness speaking to the deed being done by a male in the age group into which the sheriff was entitled to conclude on his own observation that the accused might be said to fall. Once again, one wonders whether Scotland will ever fall into line with the rest of the world and do away with the necessity of corroboration. I think that I should be sorry if we did lose the beast.

Trial within a trial

Another area where reform may be needed is that the law of evidence in so far as it has resulted in the rising from the depths of that jurisprudential Kraken, the trial within a trial. This has turned out of be as monstrous as was feared, especially as regards size.   The comments of Lord Osborne in the case of HMA v MacMowat 2001 GWD 12 408 will not, one trusts, go unheard. In that case the court was faced with a trial within a trial lasting a week, with all the resultant uncertainty and confusion thereby arising. It surely cannot be a good thing to require witnesses to give their evidence twice over.

There are now four more delay cases worth a look. Beglan v HMA 2001 GWD 10 -341 involved a delay of three and a half years between the beginning of police investigations and the charge, which was one of embezzlement. This was held in the circumstances to be not unreasonable, some stress being laid on the fact that the investigations had been continuous. Follen v HMA 2001 GWD 13 -409 is a Privy Council case that effectively affirms the original judge’s decision that in the circumstances a period of ten and a half months between appearance on petition and the trial date was not unreasonable. The case is interesting for the Privy Council’s finding that it had no jurisdiction to give special leave to appeal on an art 6 (1) argument when the appellant had departed from that before the High Court, the Privy Council having no original jurisdiction to consider devolution issues. The case is also remarkable for the Judicial Committee’s observation that when the High Court refused leave to appeal to the Privy Council it might be useful if reasons were to be given, since this might allow petitions without merit to be disposed of without an oral hearing. Next in HMA v P 2001 GWD 7-255 it was held that where P was 13 at the time of the alleged offence, rape, and 23 months passed since then, it could not be said that he had been brought to trial within a reasonable time. Finally, there is Dyer v Watson  2001 GWD 14—544 a case which produced that comparatively unusual thing, a dissenting judgment, in this case from Lord Hamilton. The case is authority for the proposition that for the purposes of computing time, a person is “charged” when he is notified by a competent authority that it is alleged that they have committed a crime. The matter on which Lord Hamilton dissented really relates to the circumstances of the particular case and of course all circumstances are different. One worrying thing about these delay cases is that they mean that the complainer, out of whose hands the prosecution is taken, is the effective loser. It used to be said that the public interest demanded that the prosecutor be not penalised for such failures, but one of the tests now does indeed seem to be whether or not there has been unjustifiable actings (or lack of same) on the part of the Crown contributing to the delay. It is with some diffidence that one suggests that what the article as originally drafted struck at was delay of decades rather than one or two years, but of course one might be wrong. In old Scottish witchcraft cases it was not uncommon for events of forty years before to crop up in the libel.

Turning now to sentencing, there are a large number of notes on this topic in recent GWDs, especially in 6, 12 and 13. Here are one or two which may be of especial interest. Johnston v Maguire GWD 11-387, in affirming a sentence of nine months imprisonment for a charge of being concerned in the supply of heroin (which the appellant, a nineteen year old of good character, claimed to have been holding for a friend under the impression that they were “speed”) makes it clear once again that anyone dealing in a class A drug will almost certainly go to prison. Kellock v HMA2001GWD 11-448 goes a good way to showing how serious causing death by careless, as opposed to dangerous, driving may be. A sentence of four years imprisonment was confirmed in circumstances where the appellant had a blood alcohol level of 94. He had driven his girlfriend’s car without insurance, crossed to the wrong side of the road on a bend and not reported the accident in which a motorcyclist coming in the opposite direction was killed.   He also had one previous conviction for drink driving. The time that it will take to pay a fine as a test of whether it is set at an appropriate level turns up again in Johnston v McFadyen GWD 2001 6-209 in which the total fine of £800, not an excessive amount for four serious breaches of the Road Traffic Act, was reduced to £600 which meant that the period for payment came in at under two years.  At a rather more elevated level, the Privy Council again, we have a compensation case, McIntosh v HMA 2001 GWD 6-206. This was a successful Crown appeal against a decision of the High Court to the effect that an application for a confiscation order made a respondent “a person charged with a criminal offence” and thus entitled to the presumption of innocence in terms of art.6 (2) and that the statutory presumption offended against this by putting the onus on the convicted person to show that the sums in question were not subject to confiscation. The Privy Council analysis was that the penalty faced was one in respect of an offence for which the person had already been convicted so that he was not a “person charged” but something beyond that. This judgment puts the law back to what it was previously thought to be, which is not a bad thing, Lord Hope observing that the act struck a fair balance between an accused’s rights and the public interest, particularly in circumstances where the relevant facts were particularly within the accused’s own knowledge.

Plea in bar of trial

An unusual plea in bar of trial was advanced in the case of Hughes v HMA 2001 GWD 15-572. This was on the basis of the accused's amnesia of the accident as a result of injuries sustained, it being argued that as this made the instructing of a defence impossible, the accused thus being insane for the purposes of sec. 54 of the 1995 Act.  It is difficult to see how this could ever be argued standing the fact that the appellant was certified as sane and fit to plead and not surprisingly in the light of Russell v HMA 1946 75 the appeal failed.

Another old friend, Moorov, (1930 SLT) was brought out for a fresh look in Wilson v HMA GWD 2001 15-571. The decision may be regarded as something of a summation of how the law has developed the original principals and it is certainly useful to have an up-to-date restatement of the position. Briefly it is as follows. The Crown, in relying on the doctrine, is seeking to prove a course of criminal conduct. There is no requirement that the doctrine be limited to sexual or other clandestine acts. One witness to each completed act, in the instant case of theft and to identification of the perpetrator, may be sufficient and as few as two incidents only may be enough. 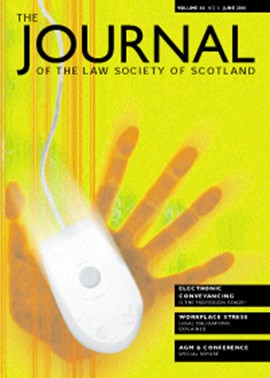