There has been much debate in the Journal over the past few months about the level of service offered by the Registers of Scotland and the future of conveyancing, with the prospect of e-conveyancing not far away, and the ARTL Pilot Scheme already underway.

Within the next year or two, the Scottish Law Commission intends to turn its attention to further reforms and the Land Registration (Scotland) Act 1979 appears on the list for consideration.

Whilst the English conveyancing system has, quite rightly, been pilloried in recent years for the way in which it deals with residential property sales and purchases, their system of registration of title is (as Alan Ramage put it in his letter to the May Journal) much more mature. It offers numerous benefits and additional protection to landowners and solicitors in England (including in terms of speed, accessibility and cost), some of which have the potential to be introduced in Scotland in future years, if there is sufficient professional support, political will and available resources.

The whole of England is now an area of compulsory first registration and the grant of a mortgage induces first registration, as do gifts of land. This means that a solicitor, faced with the prospect of examining an unregistered title, does so in the knowledge that he or she will almost certainly be the last person to have to do so.

The process of transferring a registered title involves downloading (or obtaining via a central telephone services number) a print-out of the title sheet known as office copy entries (which is dated and timed [the English Land Registers operate with real time priority]). A brief transfer form (TR1) is adjusted between solicitors and signed by the seller. Shortly before completion, the purchaser or lender’s solicitor applies (by telephone or via the Internet) for a priority search, the results of which are given instantly. This search discloses whether or not there have been any entries made on the register between the date of the office copy entries and gives (again with real time priority) full protection or priority against adverse entries, to the purchaser or lender named on the search, provided registration of their title is applied for within the next six weeks. Letters of Obligation are, accordingly, not required (and unheard of in English conveyancing).

Discharges of existing charges can be dealt with electronically using ENDs (Electronic Notification of Discharge) by the major lenders.

The range of interests which can be protected by noting on the Land Register are wider than in Scotland, and a system of Outline Applications has recently been introduced. This allows parties who do not normally qualify for a priority search (only purchasers and lenders qualify) to obtain several days protection. The use of Outline Applications allows parties who acquire interests which are not for valuable consideration, a degree of protection whilst the paperwork is making its way to the Land Registry.

A range of rights which in Scotland we would term as personal rather than real, can also be protected. For example, as soon as a contract for the sale or lease of a property has been concluded, the prospective purchaser or tenant may apply to have its interest noted on the Land Register. So can the beneficial owners of a property which is subject to a trust. Lenders and beneficial owners can also apply to have a restriction entered on the Register which prevents a transfer of the property taking place without their consent.

As Graham McCormick has mentioned, registration costs are significantly cheaper. Land Registry fees for a property valued at £100,000 in England are £100, in Scotland, £220. There is a ceiling of £800 for properties valued at £1,000,000 or more – in Scotland this rises to £7,500. Company searches are commonly carried out using the Companies House Direct service (at a cost of approximately £2), the cost of obtaining office copy entries is £8, and the cost of obtaining a priority search is £4. Both are lower if carried out online.

Outwith the sphere of land registration, some other common English conveyancing practices seem to help streamline the conveyancing process. The use of pre-contract enquiries, for example, requires the seller to provide full information about a property, from details of disputes with neighbours, and details of beneficial interests held by other parties, through planning and building warrant matters, fire certificates and VAT, to completion arrangements, helping to ensure that all information likely to be relevant to the transaction is requested and provided at an early stage. The answers can be relied upon by the buyer, which reduces the need for warranties about property matters in the contract. The use of standard form sale contracts is also widespread.

Another apparently time saving practice is the ability to have documents executed in part and in counterpart. Two identical copies of each deed are prepared. Each party signs one of the copies and sends it back to his solicitor. The deeds are then “exchanged” between solicitors either by post or by telephone (using a Law Society protocol). This is a convenient process which avoids the delay involved in sending deeds around the country for signing by several parties, but which, of course, could not be adopted here without new legislation.

Having practised simultaneously in both jurisdictions for a number of years now, it is starting to become apparent that practices like these, taken with the benefits offered by the English Land Registry, are increasingly cutting the time and cost involved in carrying out conventional property work in England and Wales. Few people outside the legal profession fully appreciate the amount of time and effort in conducting due diligence on an unregistered title, or one in the course of first registration. It can take many hours and add significantly to the cost of a property deal. Clients, particularly institutional ones, are increasingly in position to impose their own fee scales on solicitors, often linked to property values. If these are fixed, based on UK averages, then there is a danger that Scottish solicitors may end up subsidising the higher cost of buying unregistered properties.

Fixed fees are often justified on the “swings and roundabouts” principle. But can this really be correct if, as Alan Ramage points out (when justifying the higher fees charged by the Registers of Scotland), the Scottish Land Register processes pro rata, four times as many first registrations as the English Land Registry are required to do? The same principle must surely apply to Scottish solicitors who also have to investigate title in areas not yet subject to land registration, and titles still in the course of first registration. If solicitors are successfully managing to pass the cost burden on to their clients, perhaps investors in Scottish property may feel that it is comparatively more expensive to do business up here.

The length of time which the Registers of Scotland can take to deal with first registrations becomes particularly noticeable when practising in both Scotland and England. My firm recently had to examine title to a public house on a Scottish business park as part of a company take-over. The developers of the park had applied for registration of their title eight years previously, but registration still had not been completed. It took more than thirty hours and cost several thousand pounds to check the deeds. The company’s own solicitors had also carried out a full examination of title when they bought the land for construction of the property, just under three years previously. The property was considered non-core to the company’s business and was sold within a few months. The new owners and their funder’s solicitors both then had to examine the title. If registration had been completed seven years earlier, four sets of solicitors fees on just one property, could have been significantly reduced. The business park contained more than thirty properties each of which could have changed hands several times in the previous seven years. When one thinks about it in these terms, the cost which the property industry might have saved, had registration been completed more quickly, starts to become staggering.

But it is not just the cost, it is the time gap which has the potential to leave Scotland standing still while the rest of the UK enters a new dimension in pursuit of a more liquid property market. Full registration is a pre-requisite for that, and England seems to be nearly there while we seem to be nowhere near. ARTL and other innovations are very welcome, but at the moment it seems that for some years to come only the tip of the iceberg in terms of property transactions will benefit.

England may have had a 54-year head start on Scotland in land registration terms, but would it be possible for Scotland to catch up within, say, the next five years? For instance, would the Keeper consider introducing measures to permit some solicitors to certify title to the Keeper in exchange for fee equivalent to the registration fee? Would solicitors be keen to offer this type of service to Registers of Scotland? Or is the fear too great that once the process becomes simple, transparent, quick and cheap, that control over it will gradually be wrested away from the legal profession?

Even within the constraints imposed by our present legal framework, perhaps it is time for Scottish practitioners to put aside pre-conceptions about the English conveyancing system, to adopt an open minded, inquisitive approach to the way work is done in other jurisdictions and to start critically examining (and if necessary re-thinking) the way property work is handled in Scotland, from start to finish.

The views expressed in this article are the writer’s own. Caroline James is a dual qualified property partner and head of the English Property Law Unit, based in Tods Murray’s Glasgow office. 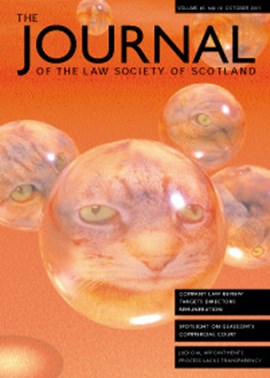