On 9th October 2001, the Tribunal found the Respondent guilty of professional misconduct in respect of his breaches of the Solicitors (Scotland) Accounts Rules 1997, his failure to stamp and record deeds timeously and his failure to respond to the Law Society. The Respondent was censured, fined in the sum of £2000 and a restriction was imposed on his Practising Certificate.

The circumstances were that the Respondent was a sole practitioner operating from his own home without secretarial support. He explained that he had difficulty with bookkeeping and records and that it was his intention to wind up his practice by 31 October 2001.

The Tribunal was concerned by the ongoing nature of the breaches of the Accounts Rules and the delays in stamping and recording deeds. The Tribunal was not satisfied that the Respondent presently had the capacity and confidence to cope with the management of a legal practice and accordingly an Order was made limiting for a period of five years the Respondent’s practice within the profession to that of a qualified assistant with a further proviso to the effect that upon the expiry of that period of restriction the Respondent would require to satisfy the Discipline Tribunal that he is then fit to manage a practice before a full Practising Certificate might be issued. 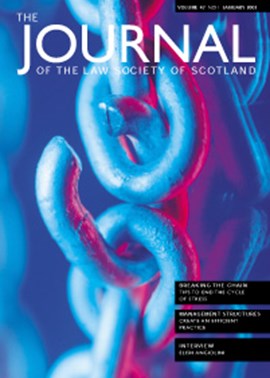