As Convener of the Scottish Parliament’s Justice 1 Committee, she’ll be a key voice in determining the future system of regulation of the legal profession and her credentials to lead the inquiry aren’t in doubt.

From her career as a solicitor dealing mainly in reparation, contract and matrimonial work, Christine Grahame brings to the committee an understanding of the lawyer’s role. But having come to the law comparatively late from secondary school teaching, she’s not so immersed in the profession that she can’t see why the public perception of lawyers is sometimes unfavourable.

The SNP member for South of Scotland became a solicitor in 1986, specialising in civil litigation at among others, Shepherd & Wedderburn, and latterly Dickson, McNiven & Dunn.

Prior to joining the profession her perception of lawyers was of a “stuffy, bookish” breed, “unconnected to real life”. In fact, she was surprised to discover lawyers operate very much at the raw edge of life. In that respect, she thinks her teaching background helped her to communicate with clients and explain issues in a way they could understand. “There’s always a danger that solicitors talk in a legalistic and complex way. So, in certain cases when explaining what was and wasn’t matrimonial property for example, I’d use objects on my desk to make it clear to people who were often confused and upset.”

Now divorced with two older children, she suggests that her own life experience helped make her a better solicitor.

“My perception may be misplaced, but it’s only human nature that you bring a certain weight to the advice you’re giving having been through it yourself. Perhaps it gives clients a feeling of security, they appreciate you know how they are feeling. In matrimonial law, there’s a great deal of client management beyond just the law and the nitty gritty details.

“Some of the files are like volcanoes. You get more out of a client if they find you are talking to them as an ordinary person. I remember one meeting with a client when I looked out the window and said I wish I hadn’t hung the washing out. She was astonished at the idea of a solicitor hanging out washing.”

The job of the solicitor is, she argues, often analogous to that of the plumber.

“If people need a plumber and he says there is a £50 call-out charge, they pay it.  Problems can arise with paying for legal advice when clients don’t understand the charges. Someone once said to me why do I have telephone charges on my bill when it was my call. It may be that solicitors have to make their charging regime clearer.”

The Law Society of Scotland has welcomed the Justice1 inquiry and the opportunity it presents for the Society to work with the Parliament to improve the way the profession deals with complaints.

At the commencement of the inquiry, Martin McAllister, President of the Society, said: “The public’s confidence in the system is fundamental and the Society is committed to ensuring that people can have confidence in its complains system.”

Christine Grahame agrees they are right to welcome this as a healthy process.

“Whether it’s true or not there is a perception out there about lawyers handling complains about other lawyers. The inquiry isn’t just looking at solicitors, but advocates too and we’ll be looking at the experiences from other countries. We will be taking our time to hear all the evidence and have a full discussion.”

At the time of writing, the inquiry has heard oral evidence from groups including The Law Society of Scotland, Marsh UK, The Legal Services Ombudsman and the action group Scotland Against Crooked Lawyers.

The Society is now preparing a supplementary Memorandum of Evidence following its evidence session on December 5th and may be requested to appear before the Committee once more in March. It is expected that the inquiry will run up to and perhaps beyond the summer when the Committee will report on its findings.

The remit of the Justice 1 Committee also includes examining the Freedom of Information Bill – a Bill which seems to be a slightly diluted version of what was promised.

“That is likely to take more than two sittings to deal with the amendments. I have concerns about the First Minister’s certificate, which effectively leaves him with a veto and the right to consult with colleagues to prevent disclosure. It concerns me that he will have the ability to restrict the flow of some information which for personal reasons, he might not want to be disclosed.”

She’s also keen to extend the Committee’s remit to examine the age of criminal responsibility and children’s hearings, an issue which Justice 1 presently looks at in tandem with the Education Committee.

“The Justice 1 Committee has an important role in counteracting the Executive. In a Parliament with no revising chamber and with a coalition government, it’s vital for a Committee like ours to serve a role not just in finding flaws with legislation but undermining the Executive when it tries to get away with things like a Freedom of Information Bill that’s not as robust as it could be. When it comes to votes, the Committee tends to fall back on party lines, but in discussion we offer a strong challenge to the Executive power.”

The Committee also recommends that the Executive should further review the qualifying criteria for, and consider an extension of, the scope of civil legal aid to, employment tribunals.

While in England there have been suggestions that lawyers should undertake more pro bono work to improve access to civil legal aid, Christine Grahame rejects this, pointing out that no other profession is expected to provide services for free.

So, if the Justice 1 inquiry into the legal profession is largely about correcting problems of perception, how can the Parliament counteract its own perception problem – namely that it has failed to live up to expectations?

“Very positive things have been done here, but the focus has been on the cost of the new building or an increase in MSP’s salaries. The cost is still small compared to MP’s offices at Westminster and you don’t hear squealing about that. I think when it’s ‘yer ain folk’, it’s the Scots way of things to have a go. You don’t come into politics to become popular, and you don’t become a teacher or a lawyer to become popular. Maybe I should have been a plumber.” 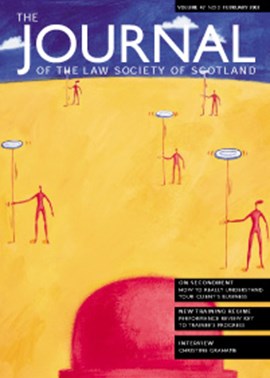