What price the core values?

Scottish and Irish Law Society Presidents restate the core values of the profession and oppose “Tesco law”
1st July 2002
The Law Societies of Scotland, Northern Ireland and Ireland are united in their opposition to the so-called Tesco Law

Last month in this Journal, John Elliot argued in favour of Multi-Disciplinary Practices.  However, following the issue of the OFT Report (Competition in the Professions) in 2001 the Law Society of England and Wales has entered into a debate about the abolition of professional practice rules which currently prohibit employed solicitors  from giving legal advice and providing legal services to the public. These proposals have been described colloquially as “Tesco Law”.

The position in England and Wales has moved on to the extent that on 10th July 2002 the Council of the Law Society of England and Wales were due to consider presentations by Tesco and the RAC in relation to their proposals for the provision of legal services to the public.

The office-bearers of the Law Societies of Scotland, Northern Ireland and Ireland are collectively very concerned about these proposals since they believe that they will result in the independence of advice available to the public being sacrificed on the altar of competition. They also believe that, if approved in England & Wales, they will render the debate on MDPs irrelevant.

The three Presidents have accordingly submitted the following article to the Gazette of LSEW for publication and it is reproduced here in part as a response to John Elliot’s argument, but also to inform the Scottish profession of the current position. 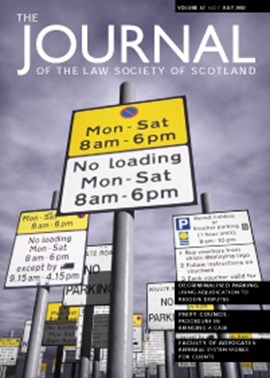