Distinction between threatened and completed wrong

In an as yet unreported decision Prostar Management Ltd v Twaddle, Glasgow Sheriff Court, 29th August 2002, the question of what constituted a "consumer contract" for the purposes of the Civil Jurisdiction and Judgments Act 1982 was considered by Sheriff Principal Bowen. As the Defender was domiciled outwith the Sheriffdom of Glasgow and Strathkelvin, if the contract was a "consumer contract" the plea of "no jurisdiction" required to be sustained. The contract was between a professional footballer and his agent. After reviewing authorities on the matter, Sheriff Principal Bowen decided that the occupation of the Defender being that of a footballer is a trade or profession and the agency contract was within the sphere of his trade or profession. The contract was not a "consumer contract". In Bonnier Media Ltd v Greg Lloyd Smith and another, 1st July 2002, Lord Drummond Young decided that the Scottish Courts have jurisdiction in relation to actions to prevent threatened wrongs in Scotland when the alleged wrongdoer is domiciled in a contracting state for the purposes of the Brussels Convention notwithstanding the terms of Article 5(3) of Schedule 1 of the 1982 Act, which only refer to "the place where the harmful event occurred" as opposed to the reference to "a threatened wrong" in Schedules 4 and 8. His Lordship’s reasoning was it can be vitally important for the Courts of the jurisdiction where the wrong is threatened to be able to exercise jurisdiction over a "foreign" Defender to prevent the wrong. This ensures the rule of law is likely to be maintained. Further the distinction between a threatened and completed wrong may not be an easy one to make.

Diligence on the Dependence – Arrestment

In Irving’s Curator Bonis v Skillen 2002 GWD 25-781 Sheriff Holligan refused a motion to recall an arrestment laid upon the dependence of an action. The motion was refused on the basis that the diligence did not deprive the Defender of the property but rather controlled the use of the property. Sheriff Holligan also observed that if a warrant to arrest on the dependence was granted without a hearing, then it did not follow that the Defender was entitled to recall. Further it was considered that there was more than sufficient to justify the diligence on the dependence, having regard to the Defender’s pleadings which did not set out a contrary factual case amongst other matters.

In Gorrie v The Marist Brothers 2002 SCLR 436 the Defenders were an unincorporated association, the members of whom had changed since the alleged acts which were the subject matter of the action. Sheriff Principal McInnes decided that when such a body was called as a Defender it was called as continuing entity and there was no authority to support the contention that when suing such a body, the members of the association at the time of the alleged actions could alone be called as Defenders.

In Capital Bank plc v Paterson 2002 SLT (Sh Ct) 100 Sheriff Holligan considered the appropriate criteria for determining such applications. This decision is worthy of note that it represents a rare report of a decision on such applications. Sheriff Holligan decided that there was no onus upon the Defender to establish that an order should be made. Once an application was made the Court required to consider all information put forward in exercising its discretion. The decision was in the main one based on financial information provided and factors to be considered were the Defender’s financial position at the time of the application, the current indebtedness between the parties, any security and any previous agreement as to payment.

In Bee v T & N Shelf Twenty Six Ltd and others, 27 August 2002, the Pursuer sought damages against a number of Defenders on a joint and several or several basis. The first Defenders had been placed in administration and it was agreed that in terms of section 11 of the Insolvency Act 1986 the proceedings quoad those Defenders required to be sisted. The Pursuer sought that the proceedings sisted against those Defenders but be allowed to continue against the other Defenders. Lord Macfadyen decided that a partial sist was competent and accordingly the question of whether to grant or refuse the Pursuer’s motion was an exercise of judicial discretion. In this case he weighed up the likely delay which would be suffered by the Pursuer if the motion was refused against any prejudice suffered by the other Defenders in the event of the motion being granted. The grant of the motion would not prevent any of the other Defenders advancing a defence against the Pursuer’s claim or a claim for contribution. The motion was granted.

In Trad Hire and Sales Ltd v Campbell 2002 GWD 25-782 the Defender appealed the granting of decree by default following his non appearance at a diet of proof. The Defender’s agents had intimated his intention to withdraw more than 14 days prior to the diet. In light of that a peremptory diet should have been assigned. Due to the festive season, the letter from the agents was placed before the Sheriff only 4 days before the diet. The Sheriff not surprisingly decided simply to await developments at the proof. The Defender had been advised by his previous agents that the proof would be discharged. Sheriff Principal Kerr allowed the Appeal. The granting of decree was incompetent. He decided that a decree by default could only be granted at a diet if the Sheriff was satisfied by some reliable means that the absent party did not intend to proceed further with the litigation. Further as the decree was incompetent, the issue of an extract was no bar to the Appeal. It is perhaps interesting to contrast these observations made by Sheriff Principal Kerr with the decision of Sheriff Principal Young in Kingfield Heath Ltd v Holburn Enterprises Ltd 2002 GWD 23-739 in which it is clear the question of whether the grant or refusal of a motion for decree by default was one for the discretion of the Sheriff.

In S v S 2002 GWD 24-758 Lord Macfadyen observed that following a decision relating to children, an appeal was inappropriate if in effect there had been a change in circumstances: far better an application for post-decree variation. Such a change could be that the child(ren) had reached an age at which they were able to express their views. This observation was particularly apt when his Lordship indicated that even if the Inner House had been of a view to allow the appeal they could only have remitted the matter to the Sheriff at first instance to hear further evidence in light of the passage of time. The Inner House certainly in that case was unable to substitute its own decision. In G v City of Edinburgh Council 2002 SLT 828 the issue before the Inner House was whether the unmarried father of a child had the right to appeal an order made to free his child for adoption when he had no parental rights or responsibilities to the child. The Inner House decided that the natural father did have a locus to be heard unless the Court could be satisfied that it was not likely that the father would be awarded parental rights or responsibilities. An interesting point arose in an application for post-decree reduction of aliment in Paterson v Paterson 2002 SCLR 579. By the time the application was being considered, the child, having reached the age of 18 years, was no longer entitled to aliment in terms of the decree. The father however argued that the application should still be considered so that his application to backdate any reduction could be decided which might have a real benefit to him. Sheriff Cusine decided that such an application could only be entertained during the currency of the obligation.

Once again the foregoing is accompanied with my customary caveat. 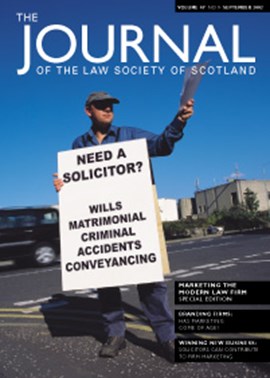