Survey of reactions to the Justice 1 Committee’s report on regulation of the legal profession
1st December 2002 | Roger Mackenzie
Substantial new powers for the Legal Services Ombudsman and a single gateway for complaints against the legal profession are on the agenda as part of a new system recommended by the Justice 1 Committee of the Scottish Parliament.

The inquiry into the regulation of the legal profession also concluded that there should be no differentiation between complaints about conduct and service, and recommended increased lay involvement to “ensure that the consumer’s voice is represented from the very outset”. As expected, the Committee recommended retention of the system of self regulation.

The Law Society of Scotland welcomed the Committee’s endorsement of its role in the regulation of solicitors, but voiced concern at some of the proposals in the report.

President of the Society David Preston said: “The Society has to work within the limits of the 1980 Act which needs amendment for the Society to change. That is why the Society has welcomed the Justice 1 Committee inquiry from the outset.

“The Justice 1 Committee’s fundamental finding is that it is more effective to maintain the present system of joint regulation. That is an endorsement of the work of the Society. Client Relations is one of the most important areas of regulation of solicitors in Scotland and the Society continuously strives to improve its work.

“The Society is at the coalface of client relations and its staff and committees deal with the reality of the legislative difficulties. The importance of independence in the system is recognised by the Justice 1 Committee which is why we are concerned about the proposals for the single gateway. How could the Ombudsman, who is increasingly perceived as a consumer champion, fulfil her role as an independent and impartial arbiter of the handling of complaints whilst operating as the gateway for complaints?

“The proposals in the report will now progress to debate and potentially legislation at a future date but the Society needs legislative change now. It is fortunate that The Council of the Law Society of Scotland Bill is already progressing through the Scottish Parliament. If passed, the bill will allow the Society’s Council to delegate decision-making powers to the solicitors and non-solicitors on committees including the client relations committees. That will empower those committees and speed up the client relations process.”

Joe Platt, the Vice President and a past Convener of the Client Care Committee, said: “The Society’s Council made its views clear when it responded to the Committee’s Options Paper. It expressed concern that the single gateway for all complaints against lawyers (which is now proposed by the Committee) could be costly, bureaucratic, cause delay and could undermine the very independence supported by the Committee.

“The Council of the Society will consider the report in detail and will work with the Parliament and with the Scottish Executive to ensure that all changes in the law arising from the report work for the benefit of people in Scotland.

“The Society is already undergoing a programme of change within the restrictions of the current legislation and the inquiry provides a real opportunity for the Parliament to change the law for the first time since the 1980s. Clients and their solicitors have every right to expect complaints to be dealt with quickly, fairly and professionally. The system must be as straightforward as possible for everyone concerned.”

The Committee stressed that the independent single gateway should not be funded by the legal profession and the increased costs of the Ombudsman’s office should be met by the Government.

The report highlighted the system in New South Wales, where a single gateway operates in a way “that suggests concerns about the practical difficulties are overstated”.

In evidence to the Committee, the Society expressed concerns that the role of a gatekeeper would compromise independence as its decisions regarding complaints are decisions in law and consequently could be subject to judicial review. The Faculty of Advocates submitted evidence that a single gateway would cause confusion in the minds of the public and result in expense and delay.

Justice Minister Jim Wallace said: “I agree with the Committee’s view that self-regulation should be retained, since it is important that the professions retain responsibility for acting in the public interest, for reviewing in a self-critical way the standards of service offered to its clients and for handling client complaints in an efficient and fair way.

“The Committee’s recommendations for strengthening safeguards, enhancing the role of the Scottish Legal Services Ombudsman and raising the level of lay involvement will be considered with care. The benefits to be gained from implementation of those recommendations will be assessed, together with their legislative and public expenditure implications.

“The legal professions act as the gateway to justice for the people of Scotland. It is essential that the public has faith in the way in which they handle complaints against their members.”

“The report is in no way blaming the Faculty or Law Society, but understanding the need for a fresh framework in which they can operate more effectively.

“The Committee heard a huge body of evidence and it’s reassuring that the process has endorsed many of the recommendations I submitted in evidence.”

“The Committee’s report is a stepping stone and will need primary legislation, but much of it could be implemented sooner with the goodwill of the profession and I hope people won’t necessarily wait for the Parliament to legislate before embracing many of its recommendations.”

Chairman of the Legal Defence Union Jim McCann said: “The continued use of the ‘consumer’ concept throughout the Report betrays a fundamental lack of understanding of what the legal system is all about.

“The Committee seem to have ignored both fairness and practicality in their zeal to please the ‘consumer’ and now propose sanctions up to £5,000. The present system does not entitle the solicitor complained against to any right to a live hearing, or to cross-examine what might be a false accusation. Increased sanctions of this level are simply not going to happen without significant changes to the procedures.”

Linda Costelloe Baker rejected any notion that legal service customers aren’t consumers, while Christine Grahame denied that in proposing a single gateway the Committee was sending out a message to foster a culture of complaints against solicitors. She said dissatisfied clients would still, in the first instance, be encouraged by the single gateway to resolve issues with the firm or individual concerned. 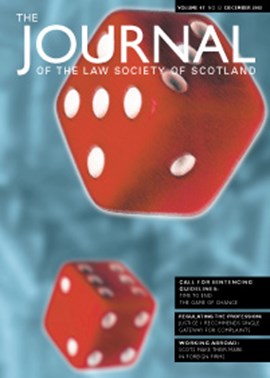