While the media spends this month looking back 50 years to the Coronation of Queen Elizabeth II or Hillary and Tenzings conquest of Everest, Chris Campbell will be sitting back and contemplating the first anniversary of his firm’s formal withdrawal from the imploding Andersen Legal Network. It is now a year since the managing partner of Dundas & Wilson completed the exit strategy in the wake of the Enron auditing debacle which destroyed Arthur Andersen as one of the Big Five accounting firms.

Having been hailed as a milestone in the development of the multi-disciplinary partnerships (MDP) when it was agreed in 1997, the link with Andersen could have become more than a millstone round the neck of the Scottish law firm. That the firm has not only survived potential catastrophe but has actually grown profits and staff numbers during that year of living dangerously is testament to the endeavours of Campbell and his chairman Neil Cochrane. In its first year post-exit, to the end of April, turnover grew by 8% while profits were up 12% without the benefit of any acquisitions. With major City firms reporting 20% falls in profit, the achievement is impressive even without the distraction of trying to protect your firm’s reputation, relaunch as an independent firm, maintain client and staff relationships. Campbell’s achievement was recognised in the Scottish Legal Awards earlier this year when he was named Partner of the Year.

From today’s perspective, with the firm now re-established and growing both in Scotland and beyond, the success of the transition strategy has a certain inevitability about it. But at the time the stakes were high and there were no guarantees that D&W would walk unscathed from the wreckage of the crashing and burning Andersen.

Campbell looks back at the events of the fraught last days of Andersen, the knife-edge decisions that ensured survival, and the lessons learnt for both his own firm and the legal profession from internal management practice to the future of MDP.

When the US Securities and Exchange Commission (SEC) announced its investigation into Andersen on 29 November, 2001, Campbell thought it was not of major significance: “The situation loomed like a small cloud in 2001. By 2002 it became obvious it was more of a cloud than it first appeared. Professional services firms are often sued for negligence but rarely do they stick at high levels. In early 2002 they discovered the shredding of documents and the alarm bells really began to ring.”

On 9 January 2002, the US Attorney General announced a criminal investigation into the firm but matters really came to a head on 15 March, the Ides of March of which Julius Caesar was warned to beware, when Andersen was indicted by Federal Grand Jury:

“In our business, integrity is absolutely crucial,” says Campbell. “Any whiff of impropriety is detrimental to your standing in the market and to client relationships. We had watched events carefully and I decided with our chairman, Neil Cochrane, that we should exit at that point. If there was damage to Andersen’s business then we had no wish to be caught in the backlash.”

That same night Campbell intimated that Dundas & Wilson would leave the Andersen network but he was careful to mix alacrity with amicable handling: “The last thing we needed was an antagonistic approach. We each had businesses to run.”

Within a month it seemed that Andersen itself would cease to exist. A number of blue-chip audit clients, including Federal Express, Delta Airlines and Merck had declined to renew major audit contracts because they weren’t willing to take the risk. The impression was of an organisation that was fatally wounded.

“Between mid-March and 5 June we worked towards the formal exit. As we cancelled our membership of Andersen Legal, we were speaking to the banks since we now had to fund our own R&D costs. Then we had to migrate our IT to a standalone system. This meant that in 10 weeks we had to scope out our needs, look at suppliers, select an IT partner and procure hardware and software. The slightest glitch in delivering any of that and the clients would have serious concerns.”

D&W were quick off the blocks: most Andersen Legal firms did not dissociate from Arthur Andersen until August so D&W paid Andersen Legal to host the IT services until they could migrate them. It was a critical point in the process.

As well as the financial and logistics issues, Campbell had to launch a hearts and minds campaign to keep the firm’s key constituents informed and onside. Conscious that speculation and rumour would fill any communications void, Campbell wrote to D&W’s major clients explaining the headline issues to them: “We had to hit everyone immediately and follow up to address their specific concerns. We could reassure them on their biggest concerns that the team was the same and the fee structure was the same. We had 2-3 rounds of formal contact with clients over that time.”

In Campbell’s view it was vital not to oversell the position to the clients and to beware of commiting to unrealistic deadlines. It allowed the firm to over-deliver on expectations.

As well as clients, Campbell has to consider his fellow partners and staff: “We had a partnership meeting within a week of the decision to exit Andersen Legal to say ‘here’s what we’re doing, these are our advisers, here’s the deal, what do you think?’

“We kept the staff informed but I don’t believe in over-communication, unlike Andersen which put out a voicemail message every week. We told everyone up-front that there would be no redundancies and that terms and conditions of contracts would be honoured in full.”

After five years of membership of Andersen Legal, the firm had begun to share financial staff with Garretts, the member firm in London and also shared marketing resources with Andersen in Scotland: “We had to approach people who were contractors and ask them to join us on a 100% basis. All of those we asked joined D&W. We also hired five partners from Garretts so the net effect was that we lost two partners and gained seven.”

The relative ease and speed with which D&W was able to extricate itself from the Andersen Legal network was due in large part to streamlined management structures that had been set up prior to joining the global organisation: “We had been through a ten year process of moving towards a corporate structure, says Campbell. “By the early 1990s the partnership had become a big business and it was impossible to get all the partners round a table at the same time – even assuming we could have found a big enough table.

“We had started to move towards professional management practices in the early 90s. The second impetus came in the mid-90s when I did a review proposing that we appoint a managing partner who was 100% devoted to the management of the firm and that this person had to have management power.”

Over the period of the exit from Andersen, partner meetings were held monthly as opposed to twice a year as normal so that no-one was out of the loop. Campbell and Cochrane felt it was crucial that a small team of partners were dedicated to working on the legal and financial issues surrounding the exit, freeing up 95% of the partners to continue working on client management.

“We did not fall below budget on any month at all despite the fact that the budget had been set a year before the exit became an issue. Neil Cochrane and I did most of the negotiations. There was a lot of speculation at the time about us joining another firm. PricewaterhouseCoopers and Ernst & Young were mooted. But it would have lacked credibility to join someone else right away.”

Promoting the resurgent D&W brand was of paramount importance. Though the firm had traded under the Andersen Legal network’s umbrella brand, it had retained the D&W name. But what of the critics who say Campbell shouldn’t have touched Andersen Legal with the proverbial barge pole? It was important to ensure that the name was re-established as an independent legal brand immediately: “We rebranded within a month of leaving Andersen Legal and we had branded gifts out to people within six weeks,” recalls Campbell.

Alongside its role in the Andersen Legal network, the firm had always retained a small Scottish team in London working alongside Garrett’s partners. Campbell’s strategy for resurrecting a London office was to bring in the Garrett partners that knew D&W’s clients: “On June 5 we started recruiting the nucleus of a London office. We now have 35 lawyers in London and 60 staff in total. We have no intention of going head to head with the Clifford Chances but the London office was a must-have in our year one strategy.”

On the international front the firm has maintained links with Andersen Legal firms with which it had cooperated in Spain, India, Singapore, Hungary and Italy: “We have a trust relationship and we want to maintain that post-Andersen Legal. Despite approaches, I don’t see us effecting a merger in the near term. There is no benefit to clients but we will pursue strategic relationships in key countries that will service client needs.”

Although relationships are in place, Campbell says that the firm does not yet built its own network to the extent that it would like. His wish list is for links with the big five countries in Europe and a partner firm in the US. Discussions are ongoing with a handful of parties.

“Our vision of where we want to go hasn’t changed. We might adjust the helm but we don’t tack from side to side. The truly great corporates, the Shells, the Unilevers, don’t change their strategy from year to year. They don’t slash and burn.”

Campbell is still pro-MDP rather than MDP-sceptic but he tempers his views: “I believe that the concept of MDP is right but that nobody has delivered the model yet. Recent events have set the concept back by 5-10 years. One-stop shop doesn’t work. Corporates are sophisticated buyers. They are shrewd and they buy the best or they buy on price so they don’t often need an MDP solution.

“In the late 90s a number of companies had grown very fast and didn’t have in-house tax and legal departments. The flat pyramid structure with the board and the workers and nothing in between meant that they needed to buy in the corporate finance, business planning, tax and legal expertise. They benefited from the MDP offering. But nobody has the model right yet. It is still just a series of services.”

Campbell may feel, like Hillary, that he has just endured a tough uphill slog. But whereas the Queen still smarts from her annus horribilis, Campbell can look back over the last 12 months as something of an annus mirabilis. 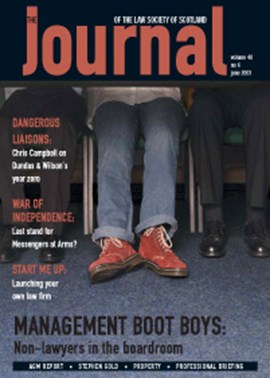