Restoration or castles in the air?

Britain’s architectural heritage has come under the spotlight recently, not least in the major BBC television series Restoration. Viewers have been invited to vote for which of 30 endangered buildings from around the country should be restored. This comes when concerns are being expressed at the thousands of historic buildings across the UK which are in danger of being lost forever due to a lack of funds. In Scotland alone there are 1,500 entries on the Scottish Civic Trust’s “Buildings at Risk” register.

Important buildings in Scotland are protected by the Planning (Listed Buildings and Conservation Areas) (Scotland) Act 1997, which provides for the listing of buildings of special architectural or historic interest, and is intended to safeguard our built heritage and promote its understanding. The list is compiled by Historic Scotland on behalf of the Scottish Ministers. Listing is of great significance since it is an offence – unless listed building consent is obtained – to demolish a listed building or alter or extend it so as to affect its character. A building is defined as any man-made structure, and the 46,000 listed buildings in Scotland range from telephone and police boxes to the Forth Rail Bridge (which may well be the largest listed building in Scotland). The buildings are divided (on merit) into three categories, A, B and C(S), which have no legal significance but indicate relative importance (and therefore the degree of difficulty likely to be encountered in obtaining listed building consent for alterations).

The listing of a building automatically covers its interior as well as the exterior. The requirement for listed building consent therefore extends to the removal of objects or structures fixed to the building. This has resulted in a number of interesting court actions both north and south of the border, initiated against those removing items from listed properties. A subjective trend in the decisions has seen objects such as paintings and mirrors, attached in the usual way, being held to be part of the building itself and listed building consent therefore being required for their removal. The common assumption that such items are moveables (and therefore freely removeable) can be an expensive mistake.

Disagreement inevitably arises with regard to what should be listed in the first place. When one thinks of listed buildings and the reasons for their listing, age and beauty almost certainly spring to mind. But more modern and unconventional choices are increasingly made. Aesthetic appeal is not always at the heart of these, since buildings may be of historical rather than architectural importance. Recently Historic Scotland barred the demolition of the Granton Gasometer in Edinburgh, which many people consider an eyesore, arguing that it contributes to a “sense of place” or link to the past. Others believe things should not be saved simply because they are old and that British sentimentality often stands in the way of progress.

Criticism has also been levied at the negative character of the obligations laid down by statute. The focus is on preservation yet there is no positive duty to maintain or repair a listed building. Many are left to deteriorate to the point where they collapse, succumbing to rot, vandalism, fire and storm. You might therefore have great difficulty replacing the front door of your flat in Edinburgh’s Old Town but could quite legally leave a Grade A listed castle to rot until it falls down.

These negative obligations (and lack of available funding) often act as an obstacle to the very redevelopment required to save such buildings. Buildings often fall onto the At Risk register because they are no longer needed for their original purpose, so the key to preservation is then to find them new uses. This will probably involve alterations requiring Historic Scotland’s consent. Buildings may simply remain empty if such consent is not given. The very rules intended to safeguard listed buildings can therefore contribute to their demise.

At the end of the day, the problem is money – or lack of it. Restoring an old building is often more difficult and expensive than demolishing it and starting again. Sadly, it seems we are now often unwilling to make financial sacrifices in the name of quality. Sandstone, wrought iron and wood have often been replaced by breezeblock, plasterboard and MDF. Yet listed buildings help define the character of our surroundings and anchor them to their past, so losing them through neglect (or demolition to make way for new development) can be regrettable. However, if they are to be retained, they will often require ingenuity from a developer, flexibility and realism from Historic Scotland and access to appropriate funding. Such funding is often in short supply, even for a caring and willing owner/developer. In the end it seems that if society places a value on our listed buildings society must also be prepared to pay for them. 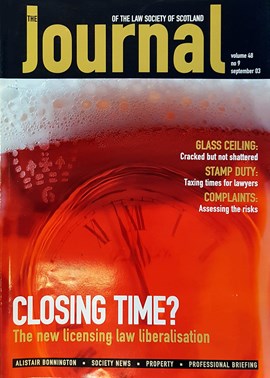