So – who says the Law Society couldn’t organise the proverbial? Rumours of the demise of IT law and lawyers in the wake of the dot.com collapse have always been exaggerated, but the fourth “Nothing But The Net” conference at the Edinburgh International Conference Centre on 8 October kicked the story firmly into touch. “Nothing but the Net” is the Law Society of Scotland’s annual review of internet law and practice. This year it could boast not only sponsorship from such heavyweights as Cisco Systems, Basilica/HP and Legal Data Solutions, but also an increase in solicitor delegate numbers of 50% over the previous event. More than 250 attended taking exhibitors into account.

The focus of the conference was on practicality. Lawyers have long since passed the stage of being satisfied with dazzling displays of technology. They are more interested in finding out which applications can bring real benefits to their businesses, while keeping up to date with the latest issues of liability and practice.

Keynote speaker Martin Cook (Business Development Manager, Cisco Systems) reviewed the range of applications and products that enable access to applications and services beyond the desktop. This is an important issue, with the most forward thinking firms nowadays willing to embrace the twin notions of seamless mobile communication provision and home working. How long will it be, one wonders, before every court in the land becomes a WiFi hot spot? Covetous eyes were subsequently cast upon the latest HP tablet on the trade floor: notably the Law Society had also managed to sell out the entire available trade stands.

Kenneth Meechan from Glasgow City Council gave his usual entertaining insight into the dark world of data protection and freedom of information. No doubt the many local authority representatives left the event informed if somewhat chastened at the impending budgetary nightmare implications of FIA compliance. The unusual notion of lawyers being sufficiently organised to collaborate was the subject of Roy Flett and Duncan Hill from Legal Data Solutions, who have persuaded 15 of the top Scottish law firms to contribute to an online database spanning virtually the whole of Scots law. This content resource is then licensed for use through each firm’s web site, with own-branding to suit the particular firms concerned.

One speaker who went down a storm was Andrew Charlesworth from the University of Bristol, perhaps assisted by acerbic remarks from the Chair about the merits of the Statute of Anne as compared with the Digital Millennium Copyright Act. This was one seminar operated strictly under Chatham House rules to enable free discussion of music piracy, copyright and the RIAA. In the other hall this left Sean Towns from Hewlett-Packard with stiff competition, but he must have done something right since the HP stand was again packed at the lunch break. Towns was discussing security and mobility in the workplace.

By common assent, the contribution of Jane Fraser (Maclay Murray & Spens) in relation to surveillance in the workplace was a bit of a mixed bag in the sense that the talk was both entertaining and presented with consummate skill, but left the emerging delegates with the uncomfortable sensation there was far too much that they still didn’t know. Not a few were heard to vow that they will be studying the Regulation of Investigatory Powers Act a little more closely. Joe Ury from BAILII in the other hall implored delegates to spread the gospel and found a ready audience for his views on the project, perhaps not surprising in a nation famous for its parsimonious approach to life in general.

It is always an indication of how well a conference is doing when the head count after lunch remains broadly the same as that before it. Marie Thirwall of Microsoft therefore had a packed hall to demonstrate Bill’s latest killer application, Windows Mobile, though there was a distinct hint of Schadenfreude among delegates when the video presentation failed to run. Shame on all of them. Keith Foggon of Sapphire Technologies gave sterling advice as to how to beat spam, but the seminar of the day was delivered by Derek Southhall of Wragge & Co when, with characteristic northern directness, he discussed “accelerating your business: how to use technology to win more work and deliver it more profitably”. This presentation could quite easily have been re-titled “how to ditch crap products and strategies that don’t make you any money and end up costing you more”. A hugely entertaining dose of realism.

In the two closing sessions Tony Neate of the National High Tech Crime Unit dealt with “Policing the Cyber Frontier”. This presentation was widely reported in the press the next day in relation to the criminal “phishing” and “scraping” of bank websites, through which customers are duped into conducting transactions on imitation sites. In the other hall Professor George Gretton managed to transform a potentially very boring seminar (“E-conveyancing – the current state of play”) into an entertaining 45 minutes of mystery and intrigue. Delegates were particularly curious to know the fate of the much awaited “Four Professors” report commissioned by the Keeper of the Registers of Scotland at the tail end of 2002, and which was supposed to set out the road map for e-conveyancing law changes in Scotland. Chatham House rules again forbid the detail of what was said, but watch this space. E-conveyancing is on its way though whether it will happen by the end of 2005 looks distinctly questionable.

“Nothing But The Net” remains incredible value for money given the quality of speakers and the fact that it is a full day conference. The ticket price of £120 is as much a tribute to The Law Society of Scotland’s enthusiasm for the topic as it is to the amounts of time and energy put into the event by both the organisers and participants. Without straying too much into the territory of rose tinted spectacles, it is fair to say that most delegates appeared to leave the event with the “feelgood factor” and that is no mean feat for any technology event these days. Nothing But The Net 2004 will be on 7 October so mark your diaries now and book those train tickets.

This totally unbiased article was written by Paul Motion, Partner, Ledingham Chalmers, Edinburgh who chaired Nothing But The Net 2003 and also survived. 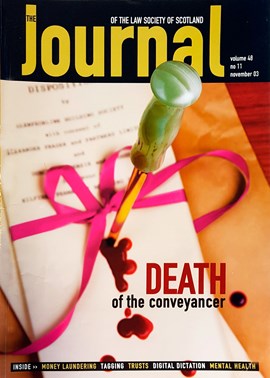