For some years prior to the unfortunate demise of the Scottish Law and Practice Quarterly I had been writing a quarterly column giving a fairly personal view of recent developments in family law, usually in Scotland, but occasionally from abroad. The editors of the Journal have now given me the opportunity to share my thoughts with a far larger audience than was possible with SLPQ, and this is the first of what is intended to be a quarterly update in family law where the issues are chosen for no other reason than their topicality and their interest to me: I hope that readers will usually find something of interest to them too. The first topic that I want to write about in this new forum is, neatly, an update of the topic covered in the final issue of SLPQ, the Gender Recognition Bill, currently before the UK Parliament. (For a description of the judicial activism that led to the need for such a bill, see my commentary on Bellinger v Bellinger [2003] 2 All ER 593, published in (2004) 8 Edin LR 93.)

The Gender Recognition Bill was introduced in the House of Lords on 27 November 2003, and was originally limited to England and Wales; the Scottish Parliament gave in to its anti-devolutionary cravings on 5 February 2004, and passed a Sewel motion (by a majority of 76 to 35) in the following terms: “The Parliament endorses the principle of giving transsexual people legal recognition of their acquired gender and agrees that the provisions in the Gender Recognition Bill that relate to devolved matters should be considered by the UK Parliament thereby ensuring a consistent UK approach and early compliance with the rulings of the European Court of Human Rights”.

In the House of Lords the bill passed its third reading five days later, by a majority of 155 to 57, with even opposition peers (with a couple of notable exceptions) supporting it “in principle”. The bill then moved to the Commons where on 23 February 2004 it passed its second reading by the overwhelming majority of 335 to 26. No substantive amendments were made during the subsequent debates in the Commons Standing Committee A on 9, 11 and 16 March 2004.

Once the bill becomes law any person over the age of 18 may apply to a new body, the Gender Recognition Panel, for the granting of a “Gender Recognition Certificate” (a “GRC”), and if this is granted then the applicant shall for all purposes of law be treated as belonging to the gender recognised by the certificate. The basis for the granting of the certificate will be that the applicant has lived for at least two years in the gender other than that recorded on their birth certificate (or has changed gender under the law of another country) and intends to live in the acquired gender for the rest of his or her life. So far so uncontroversial.

If the applicant is married then all he or she can seek is an interim GRC, which has no effect other than that it can be converted to a full GRC within six months of the annulment or dissolution of the marriage. Many organisations supporting the bill, and indeed the Joint (Parliamentary) Committee on Human Rights, expressed severe reservations at the requirement for a transsexual person in a stable marriage to bring that marriage to an end before they can access those rights currently denied them, but the Government held firm on the ground that to recognise the continued existence of a marriage after gender reassignment would amount to the recognition of a marriage between two persons who were, in law, of the same sex; and it further argued that the problem would shortly be resolved by the current proposals to allow such couples to re-establish legal links by means of a registered partnership for same-sex couples. There do remain difficulties, however, in particular (though admittedly unusual) circumstances. If, for example, two transgendered people are married to each other and each seeks a GRC, they would be required to end their marriage, obtain the GRCs, and then remarry in their new genders, which seems needlessly cumbersome. (An attempt on 16 March at the Commons committee stage to deal with this problem was not pursued.)

Once granted, the GRC would result in the new gender being the holder’s gender for virtually all purposes of law. The effect would be solely prospective and it would not, for example, retrospectively validate any marriage. Again, the Joint Committee on Human Rights argued in favour of some retrospective effect, but again the Government refused to budge. GRCs will be registered in a new Gender Recognition Register, maintained by the Registrar General and open to public inspection.

There is a conscience clause for clergy from the Church of England and the Church in Wales, exempting them from any obligation to solemnise the marriage “of a person whom he reasonably believes has a gender recognition certificate”. This is not needed in Scotland since clergy here are under no such obligation and have the personal power in any case to refuse to solemnise a marriage. There were attempts in the House of Lords to remove the right to marry as a consequence of the granting of a GRC, but all the amendments to that effect were defeated – and would indeed have gone against one of the central thrusts of the European Court of Human Rights decision in Goodwin v UK (2002) 35 EHRR 18 which involved both the right to private life and the right to marry.

Exceptions to recognition of the new gender include (i) parenthood, so that a person’s status as “mother” or as “father” of a child will be unaffected by the GRC; (ii) peerages and titles of honour, though the Queen may be petitioned to alter the form of address of any peer who obtains a GRC; and (iii) (as a Lords amendment) sporting bodies, who will be allowed to continue to make decisions about whether individuals may participate in “male” events or “female” events (where necessary to ensure either “safe” or “fair” competition). A further exception, applying only to Scotland, relates to gender-specific offences (English criminal law having gone gender-neutral a few years ago): criminal liability for a gender-specific offence will continue notwithstanding that the relevant individual has, through a GRC, changed sex.

Throughout the House of Lords debates, a recurring feature (from a regular coterie of peers) was the fear that the bill was an attack on religion, and on the family. A few peers felt that the so-called conscience clause did not go far enough – rather churches and other faith organisations should be given the right to exclude from membership or from the provision of services other than marriage persons who are in possession of a GRC. The basis of this argument seems to have been that the GRC declares a lie (that a “man” is now a woman and vice versa) and that those who adhere to religion should not be forced to acknowledge a lie. There is some judicial precedent for this odd outlook (see Lord Hope’s judgment in Bellinger v Bellinger [2003] 2 All ER 593 and my comment at (2004) 8 Edin LR 93), but it fails to recognise that gender is a legal status as much as a matter of fact. The law can define that status in any way it chooses – and indeed gender as a matter of fact is not as black and white as the religious argument assumes. At the Commons committee stage on 16 March an attempt was made to extend the conscience clause to registrars, but was defeated. A further expressed fear was that not enough consideration was being given to the effects of the granting of the GRC on others, in particular family members of the certificate holder. But this is nothing to the point. The certificate can be granted only after the individual has lived in his or her new gender for at least two years and it is likely that it is the decision to begin living in a new gender that will have the decisive effect on others, rather than the regularisation of what will by then be the existing position by the granting of the GRC.

This bill will shortly become law. It will affect a tiny number of people, but affect these individuals in a way as profound as it is possible to imagine. The bill is needed only because we live in a gendered society whose gendered laws are regarded as acceptable and will not themselves be changed. But this in itself makes the argument very different from that relating to gay and lesbian people: for there the aim is to change all laws that treat people differently as a result of their sexual orientation. That is an issue that this column will certainly return to in the foreseeable future.

Kenneth McK Norrie, Professor of Law at the University of Strathclyde 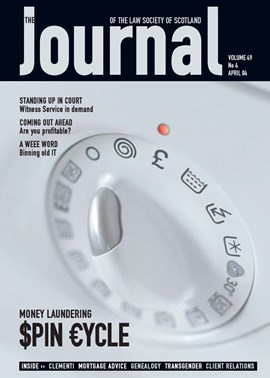