Profile of the Chief Accountant's Department of the Society, emphasising the financial probity of Scottish solicitors
1st May 2004 | Peter Nicholson

The Scottish legal profession, its leaders like to tell us, is overwhelmingly honest. To some it may appear a little self-congratulatory, but to Leslie Cumming it is a pillar of his accounts inspection and monitoring system. That was reinforced when a foreign visitor, commenting what a well constructed system was in place in Scotland, added that it might not work back home “because they didn’t think that the base population were as trustworthy as your average Scots solicitor”, says Leslie. “It is a fact that our system relies on the near 100% honesty of the profession which is what we find time after time. It is our duty to the profession and their clients to ensure that those who maintain the highest standards and their clients are protected from the actions of the few who act dishonestly.”

In the wake of the drawn-out Kennedy Forster case (the Crown prosecution has now concluded three years after the Society prosecution), such comments perhaps keep matters in perspective – only a very small proportion of solicitors are involved in dishonest conduct and claims on the Guarantee Fund in recent years have averaged under £250,000 annually. But we had to ask, given the regime of regular inspections of every firm in the country that has been in place for 15 years now, how Forster had managed to carry on for so long undetected.

“This case involved a uniquely complex system with the evidence well hidden. But as with all cases, once the cracks appeared layer after layer of the fraud was exposed and produced the evidence which we needed and which the Crown then used. Most successful frauds involve several strands and depend on a position of particular power or influence. The hardest to uncover are those where there’s an element of complicity. It’s a constant challenge and each time we find a scheme we ensure that all our inspection teams know about the mechanisms and how it worked so that they can recognise the signs in the future.”

Identifying those most in need of intervention may not be straightforward. “One of the most difficult aspects of the work is when people raise concerns about a practice or a practitioner but can produce only anecdotal evidence. That is useful but the Society and its regulatory departments still have to find the hard evidence before we can take action or pass information to the police or the Crown Office”, Leslie explains.

The headline-grabbing cases, while each requiring a heavy work commitment, make up only a small part of his department’s workload. The work of the inspection team, the aspect most obvious to the profession, is itself far from the complete picture. What the department also does, and would like to do more, is advise practices known to be in difficulty financially while there is still some prospect of rescue.

“It’s a difficult thing to manage because most people are very optimistic about their business and what they hope to do. Even when things are looking pretty grim they’re always very hopeful that things will get better. Sometimes the reality is that they are sending ‘good money after bad’, but that’s not the way people see it when they are caught up in their hopes and working hard for the practice to survive. I’d like to do more in that area if we could reach those who are struggling with financial pressures, because we’ve been through that with several solicitors and we can give good advice at an early stage, before they crash.

“We can talk about finding a managed solution. We can look to see if within the local community there is interest in taking over clients’ business. We can separate out the solicitor’s interest from the clients’ interests. It may no longer be a going concern but the assets can be sold on which in turn buys a solicitor time to take a step back and think about their future. They can also avoid being caught up in a shambles which can lead to breaking the rules and prosecution. By getting in at the right time we can streamline the process and help. We’ve had one or two encouraging results but we would like to do more.”

Broader education issues also figure prominently – training sessions, seminars, roadshows, faculty visits, plus special courses for cashroom partners and staff and the biannual induction meeting for all those coming to partnership for the first time. Not surprisingly much attention is currently devoted to money laundering duties (an updated package of advice and guidance appeared on the website this month). Further, the whole field of relevant practice rules is kept under constant review. The move a few years ago from the annual accountant’s certificate to six-monthly self-certification of compliance has been “a great success”, says Leslie – the Society has a more up-to-date picture, and the certifying partner is much more directly involved with and responsible for the accounts. “This part of our work has been looked at and followed up by other jurisdictions.”

The Guarantee Fund Committee, whilst agreeing on settlements of claims, also oversees the inspection and reporting system. Made up of practitioner Council members and currently convened by Kirriemuir solicitor John Hamilton, it is “a very hardworking committee …a serious generator of paper”, in Leslie’s words. Each inspection is reported to the committee, and only a minority achieve a completely clean report. Most matters picked up are minor and technical rule breaches which can be settled by correspondence with the firm concerned with some helpful advice; in case of dispute the committee will consider the position and will decide how to proceed where a report requires particular attention. In addition to ordinary meetings, committee members work a rota of interview meetings with those solicitors who have problems accepting what is required – this is more effective coming practitioner to practitioner rather than from an inspector. “But probably a good third to a half of those meetings are in fact much more advice, encouragement, instruction as it were, advising the solicitor as to how to do better or how to set up a system or how to make things work more easily, which again comes from people who have the experience.”

If professional misconduct has to be considered, the case is passed to the new Professional Conduct Committee, which decides if there is a case to go to the Discipline Tribunal. The PCC can also advise on questions of professional standards. There is also liaison with the Client Relations Office – if the same names are coming to the attention of both departments, it could be an early sign of trouble ahead.

Such an integrated approach is indeed recognised by those who monitor the regulation of the profession as providing the high level of public protection of which the Scottish profession can be proud, says Leslie. “The profession may not be aware that the Scottish jurisdiction’s regulation package is well known to organisations like the IBA and we have had contact from many jurisdictions  who have sent observers see what we do and how we do it and take the best of the ideas back to use in their jurisdiction. It’s very encouraging that they look at what we’re doing and think it’s a standard that they would like to achieve. So I think we punch above our weight, as they say, in the international community in this field.  The Society’s regulatory work is undertaken at the will of Parliament and funded and monitored by the profession. The Committee and the Council decide what’s reasonable, what’s appropriate, what needs to be done and it’s my task to try and deliver that as efficiently as we can. “I think it’s fair to say that the profession are very firm about what they expect in the way of standards and we have to work hard to make sure that everybody achieves that level.”

Indeed Leslie offers full backing for anyone striking out on their own. “I’m very much in favour of encouraging the sole practitioner business because that’s where people start – all the big organisations usually start off with some entrepreneurial drive from an individual and it’s the future of the profession coming through at that level.” Nor do they have to be regarded as high risk in relation to financial malpractice: “We’ve had more money lost in partnerships since we started inspecting all firms than from all the sole practitioner frauds since the Society was set up in 1950.” Kennedy Forster (which was settled through the Master Policy) and Giles Davis (which was settled through the Master Policy and Guarantee Fund) were both partnership claims.

Phyllis Stephen, organiser of the Solitaire group of sole practitioners, said she was “happy to see that the Society is supportive of our sole practitioner status and realises that we are in the main hardworking honest individuals! A large percentage of firms in Scotland and England are in fact sole practitioners. We welcome that support and any assistance offered by the Society  in the face of the ever increasing burden of endless rules and regulations mainly in the field of money laundering.” 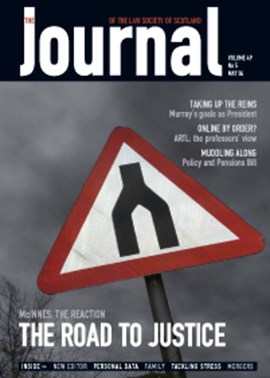