The proposed planning gain supplement as revealed in the government's consultation, and what the Scottish Executive should do in response
16th January 2006 | James Aitken, Andrew Duncan

As widely predicted, the Chancellor announced a consultation on a Planning-Gain Supplement (PGS) in his pre-Budget report (“the consultation”). For supplement read tax. The PGS has its origins in the Barker Report. The 2004 Barker Report on Housing Supply in England recommended that the UK Government impose a PGS to allow the extraction of a proportion of the value gained through the granting of planning permission for housing development, for use in the funding of essential infrastructure. The Government believes that this will alleviate the current housing shortage highlighted by the report.

The closing date for this consultation is 27 February 2006. The UK Government does not propose to introduce a PGS before 2008.

The first question that should be asked is what, if anything, has this to do with Scotland? Compared to the magnitude of the reaction to Barker in England the Scottish response has been almost non-existent. Indeed even the First Minister appeared to dismiss the Barker Report when he said in March 2004: “in essence it is about the English housing market”. However, at that time it was difficult to find anyone in favour of introducing a PGS. Now we have the British Property Federation (BPF), the Confederation of British Industry (CBI) and the Royal Institution of Chartered Surveyors (RICS) all agreeing that something needs to be done to fund infrastructure improvements, although they would prefer a local planning tariff rather than a PGS. That said, and perhaps understandably, none of these bodies seems to have looked at this from a Scottish perspective.

So does the Scottish Executive have a view on the matter? A recent report prepared for the Executive entitled “Planning Agreements and Positive Planning for Sustainable Communities in Scotland” acknowledges the funding gap and suggests that the gap should be met from outwith the planning system. The report also unhelpfully states that as taxation is a reserved matter, it is beyond the scope of the report. Not only is this apathetic approach unhelpful, it is illogical as the Executive is responsible for both planning and housing which are inextricably linked with the raising of finance for the funding of infrastructure improvements.

At time of writing the Executive is about to publish a Planning Bill of which it states: “The overall challenge for the Planning Bill is to set out a planning system that works for Scotland”. The Executive also reviewed the Scottish housing market in July 2004. Given the obvious link between the funding of infrastructure improvements and housing and planning, the Executive should consider the following:

What does the consultation say?

The proposed PGS is essentially a tax which the Government expects will be paid by developers (although in some circumstances it may be paid by another party such as the landowner). It is intended that it will be based on “planning gain”. This is defined as the difference between the land value with full planning permission (known as planning value or PV) and the value of the land with its current use as permitted by the planning system (known as current use value or CUV). The PGS rate is then applied to the difference between the two values.

No rate for the PGS has yet been specified. The term “modest” is used throughout the consultation in relation to the rate to be applied. A figure of 20% has been mooted in the press. The rate will be set by the UK Government and there may be a lower rate for brownfield land. There is also nothing to suggest that different rates will be set throughout the UK.

The PGS will apply to residential and non-residential development, greenfield and brownfield land. Home improvements will be excluded and there may be a very low minimum threshold. The consultation indicates a reluctance to provide further exemptions due to the need to maintain a low rate of tax and to prevent avoidance.

How will it work?

The developer then has to declare its intention to commence development. This could be a number of years after full planning consent is granted. This is to be done by the submission of a “Development Start Notice” (DSN). The DSN is to be submitted to either the appropriate local authority or Her Majesty’s Revenue and Customs (HMRC). Development cannot start until the DSN has been validated.

The DSN must identify the chargeable person, i.e. the person or entity that is responsible for paying the tax. It may also be possible to register a DSN.

The consultation asks at what point payment of the tax should occur. The options given are at the commencement of development or at some other point in the development process. The argument put forward in the consultation for payment when development commences is that by that point the developer has secured sufficient interest in the land and financing for construction. This is likely to mean that a developer will be paying tax before receiving any income from the property.

Requiring payment when development commences is also likely to ensure that the developer is the chargeable person.

The chargeable person will be required to make a PGS return to HMRC within an as yet unspecified period of time. The PGS return will include valuations for PV and CUV, relevant supporting information and payment. Payment by instalment may be allowed.

Part of the PGS funds collected will go to central government and part will be redistributed to each local authority. This will almost certainly be one of the most contentious of the consultation issues. A government spokesman has stated that the “overwhelming majority of income would be recycled within the region from which it derived”. However, the Office of the Deputy Prime Minister has only been able to confirm that the figure redistributed locally would be more than 50%.

The PGS regime will be enforced by a combination of interest charges, penalties and other compliance measures. Where there is sustained non-compliance a “Development Stop Notice” will be issued. This notice could be used where a DSN has been submitted and development has commenced but no subsequent PGS return was made, or when development commenced without submission and validation of a development start notice.

The consultation also refers to possible transitional arrangements. “The introduction of a tax would need to be accompanied by transitional measures to ameliorate the impact on developers already engaged in land sales contracts that were drawn up before this charge was introduced, or for those who hold large amounts of land already purchased, but where planning permission has yet to be secured.”

Reaction to the consultation

The response to the consultation has been mixed. The BPF, the RICS and the CBI continue to argue for a planning tariff. Liz Pierce, Chief Executive of the BPF said “This seems to be a consultation about the design, not about the principles behind it or the alternatives to it.”

The success or failure of the PGS is likely to depend on the rate of tax, its complexity and associated costs, how much is redistributed to each local authority and how brownfield sites are dealt with.

The main arguments still being put forward against the introduction of the PGS are:

It is clear from the consultation that the Government has taken on board a number of the concerns raised since PGS was first mooted by Barker. That said, whether the PGS achieves its goal of funding infrastructure improvements by taxing the planning gain is likely to depend on the PGS rate and how much of an administrative burden it becomes. Our faith in the UK Government introducing a new tax efficiently and effectively whilst taking the Scottish position into consideration has been seriously undermined by the continuing shambles that is stamp duty land tax. To prevent a similar state of affairs with a PGS, the Scottish Executive must play an active role in deciding what is best for Scotland with regard to the funding of infrastructure improvements. 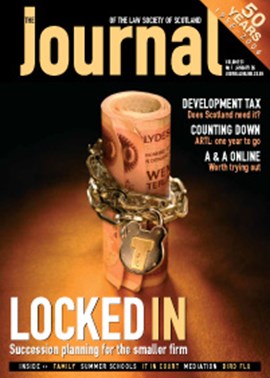