The status of the law of trespass in Scotland since the introduction of access rights to land, arguing that the offence remains if rights are not exercised responsibly
14th May 2007 | Colin Christie

There have always been arguments about the right of access in Scotland, which has at times conflicted with the unclear laws of trespass. As a result of this the Land Reform (Scotland) Act 2003 came into being.

The Scottish Executive laid a heavy load on itself when it published the draft bill in February 2001. The consultation elicited 3,587 responses, more than to any other draft bill ever published in Scotland. More than 80% related solely to Part 1 of the bill on access, and 76% of those (2,222 responses) came from individual hillwalkers, mountaineers and members of clubs and societies. A further 14% (459) came from landowners, and the remainder from community councils, local authorities, recreational and sporting organisations and others.

The 2003 Act establishes (new) rights of access in the countryside for members of the public, including the right to be on and to cross land for specific purposes, namely recreational and educational. This means that the right granted is not simply of passage, but includes camping, picnicking, etc. By s 2 these rights must be exercised responsibly (lawfully and reasonably and taking proper account of the interests of others and the features of the land). The presumption will be that a person is acting responsibly unless they are interfering unreasonably with the rights of others, breaking an existing byelaw, or disregarding guidance set out in the Scottish Natural Heritage Outdoor Access Code (“the Code”), which the Act imposed a duty on Scottish Natural Heritage to draw up.

The Code has been approved by ministers and the Scottish Parliament. The detailed guidance provided should help to ensure that few problems arise. However, if there is a problem, the Code is expected to be a reference point for determining whether a person has acted responsibly. For example, where a dispute cannot be resolved and is referred to the sheriff for determination, the sheriff will consider whether the guidance in the Code has been disregarded by any of the parties. In this sense, the Code may be said to have evidential status. Failure to comply with the Code, however, is not of itself an offence.

Trespass then and now

It is a perpetual myth that there are no trespass laws in Scotland. Trespass has long been a civil wrong remediable by the remedies of interdict and damages, and specific criminal offences have been created by a series of statutes from the Night Poaching Acts 1828 and 1844 through to the Criminal Justice and Public Order Act 1994.

Sections 61, 63 and 68 of the 1994 Act create specific offences of trespass in circumstances posing a threat to public order. In McAdam v Urquhart 2004 GWD 23-501, protesters against genetically modified crops were held to be guilty of an offence under s 68 when they went beyond the purposes for which the police, with the consent of the owner, permitted them to be present on the land and attempted to disrupt the sowing of the crop. The High Court endorsed the sheriff’s opinion that each protester “had a conditional licence from the police to be present on the land provided that he did not interfere with the sowing process”. Once that condition was broken they could no longer claim to be present on the land with the consent of the owner or anyone else.

Following this case the 2003 Act amended the 1994 Act by adding a new s 61(4A). In summary, the subsection refers to persons who have become trespassers through having ceased to be entitled to exercise their access rights because they have formed a “common purpose” within s 61(1).

If the same circumstances arose today I believe the demonstrators would not require permission from the farmer to be on the land (unless there were crops growing), and their actions would only become criminal when they obstructed the tractor.

A more general provision is the Trespass (Scotland) Act 1865, enacted shortly after the time of the Highland Clearances. The Act was initially intended to keep certain Scottish clans, the MacPhees for example, off their ancestral land. At the time of its enactment there was a call from landowners for a law to restrict access completely, but this was rejected by Parliament in favour of a law introducing measures against encampment as there was at the time a recognised “problem with tinkers”.

Reid suggests that “the 1865 Act is a rogue piece of legislation which is so far past its sell-by date it is surprising that no-one has taken it to the Court of Human Rights…. It is used far more often than many assume, and principally as a threat in circumstances where police are asked to remove someone from private land” (“The Freedom to Roam – A Cultural and Economic Asset”, in Sharing the Earth, Donhead Press (1995), at 214).

The 2003 Act amends s 3 to state that the offence does not apply to “anything done by a person in the exercise of the access rights created by the Land Reform (Scotland) Act 2003”, i.e. by exercising responsible access. To demonstrate I will use the example of “wild camping”, which prior to the 2003 Act was potentially criminal under the 1865 Act.

That Act, however, fails to define exactly what “private property” is and I believe as a result there have been very few prosecutions against campers. A survey of a sample of procurators fiscal in about 1990 showed that none of them was aware of any prosecution applied to recreational campers.  I believe “private property” simply to be land/property owned by another, and I am unaware of any legal challenge made against this interpretation.

The law under canvas

The 2003 Act includes various provisions which relate to camping. Section 1 indicates that access rights extend to “remaining on” land for relevant purposes, and the Act does not restrict the exercise of access rights overnight. The amendment referred to decriminalises the occupying or encamping on private land, and lighting a fire on or near a road, enclosed land or plantation, as long as the person is exercising their rights of access. The Act thus confers broadly inclusive rights with regard to informal recreational camping, qualified of course by the need for responsible behaviour.

The Code defines “wild camping” as “lightweight and done in small numbers and only for two or three nights in any one place” (at 115). In relation to this type of activity, the Code indicates the need to keep well away from buildings, roads or historic structures and to avoid litter, fire damage or pollution. The reference to “well away” is intentionally flexible, reflecting the widely varying circumstances which apply in different locations. “Small numbers” are likewise not defined.

Given a scenario where an individual sets up an overnight camp directly adjacent to a domestic garden, it would depend on the direct circumstances whether or not the camper was exercising his access rights responsibly. If it was found that he was acting in an irresponsible way (taking guidance from the Access Code), the 2003 Act suggests that he is committing an offence contrary to the 1865 Act as he is not within his rights as defined by the 2003 Act.

The original intention of the 2003 Act was to confirm people’s traditional freedom of access to the countryside, i.e. codifying what happened already in practice if not in law. “Responsible behaviour” is detailed in the Code and an extensive education programme has been introduced to promote responsible behaviour. It is suggested that this approach, with the potential for the Code to be used in support of civil remedies, which has proved to be successful in other countries, is far more palatable than introducing a new criminal offence, as was proposed in a draft of the Act (cf Reid, cited above, at 221).

However, there is nothing in the 2003 Act to prevent an offence under the 1865 Act being committed by someone exercising their access rights irresponsibly, and in my contention it would still be a relevant charge against anyone found in such circumstances.

Blackshaw suggests that “the freedom to roam may be seen as the long-standing general freedom in Scotland to take harmless responsible access to land not in cultivation without any need to seek consent, and without trespass, generally recognised by landholder and public alike as an accepted normal convention of society” (“Implied Permission and the Traditions of Customary Access”, Edinburgh Law Review (1999) at 368). However “freedom” is different from “right” and it is the latter most people take issue with. A right is something contained within law and I believe the 2003 Act has moved a long way to providing certainty in this.

If such access is not exercised responsibly as set out in the 2003 Act and the Code, I believe it then becomes a trespass whether it be with civil remedy or an offence under the 1865 or 1994 Act if applicable.

The 1865 Act is undoubtedly an antiquated statute which is out of touch with our modern society. However, there is nothing in the 2003 Act which removes it from the Scottish criminal law and I therefore suggest that it still carries the same weight as it did before the implementation of the 2003 Act.

The 2003 Act goes a long way towards creating a lawful right of access for all, but I hope to have demonstrated that it is still not as simple as it appears at first glance and there remains much clarification to be had.

Colin Christie is currently a police sergeant with Grampian Police based in Aberdeen and a former LLM student at the University of Aberdeen. This paper derives from his LLM dissertation. The author would like to thank Alan Blackshaw OBE, VRD, and Robert Reid, Convener of the National Access Forum, who were kind enough to give their time and opinions during its preparation. 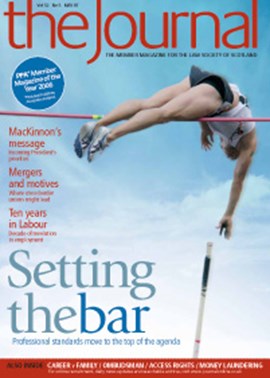