Review of the site of the new Equality and Human Rights Commission, which combines those of its statutory predecessors
19th November 2007 | Iain Nisbet

On 1 October 2007, the Equality and Human Rights Commission sprang into existence (much like Athena from Zeus’ forehead, except without the attendant thunderbolts). The new Commission does, however, have a brand new website which I shall now review for you.

As you may know, the Equality and Human Rights Commission has now taken over the remits and roles of its three predecessor commissions: the Disability Rights Commission (DRC), the Commission for Racial Equality (CRE) and the Equal Opportunities Commission (EOC). In addition, it has responsibilities for human rights matters and the three remaining discrimination strands: age; religion and belief; and sexual orientation.

The URL (or web address) is more descriptive than the acronymic approach taken by the previous Commissions, which is good and will help the new Commission to get better search engine rankings. In fact I have been reliably informed that its title is never to be shortened to EHRC “on pain of death” – don’t say I didn’t warn you! I assume that the “.com” is a sort of play on words – acting as an abbreviation for “Commission” – rather than an indication that they plan to operate as an international commercial organisation (which is what .com denotes, strictly speaking). Please also note the word reversal: there was a proto-commission website which went by the name of the Commission for Equality and Human Rights (or CEHR), but no longer.

Before I leave the history to one side, the old Commissions’ websites have now disappeared and all redirect to this one instead. However, the content of the old sites has been archived and is still available (though not necessarily for the long term). You can find the archives at http://tinyurl.com/32k3a3. There are a lot of really useful materials there so I’d recommend that you take a browse around the archive and download and save anything you like the look of for future use.

As for the new website, it looks and feels most similar to the old Disability Rights Commission site and, as that was the most accessible of the three, it’s only right and proper that this is the case. For example, as well as the relatively common option to alter text size, the user is also presented with an option to listen to the website, and given a choice of alternative colour schemes. Most of these are pretty ugly, but really helpful if you have a visual impairment.

The site is crisp and clean and has been well organised and thought out. One feature which is an innovation for this site (I think) is the “Speaker’s Corner”, in which various articles on topics related to equality and human rights are presented. As befits the title, they tend to be well suited for initiating discussion and debate. The site then invites comments and (presumably after some screening process) publishes those alongside the article itself – this has led to some lively online posting and counter-posting but is a welcome sign of the new Commission’s self confident approach.

The site is split into different sections by target audience (individuals, organisations and advisers). The advisers’ section in fact reproduces much of the very useful resource material that could be found on the previous Commissions’ websites, including the Equal Opportunities Commission’s excellent microsite EOC Law Scotland. As the site is still quite new, that’s about the size of it for the time being. However, the guides for individuals provide some basic information on the rights conferred by the law, including explanations of how to take claims to employment tribunals or the sheriff court. There is also a guide to using human rights. More resources for advisers covering age, sexual orientation, and religion and belief are promised soon.

The publications section is already well stocked with the collected works of the equality commissions. These are available in the main to download in Word format or PDF (or both), and some publications – especially those originally authored by the DRC – can also be ordered for delivery to your home or office in a variety of languages and formats (e.g. Braille, audio tape, easy read etc).

Overall, a very promising start for this website and for the Equality and Human Rights Commission itself. 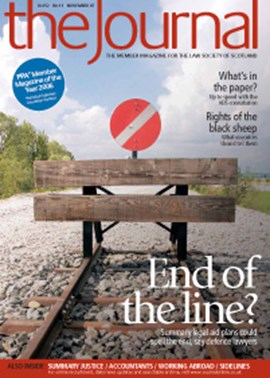