How a chance find in an executry led to an important addition to the national archives
16th June 2008 | James Aitken, Maria Castrillo

An activist and collector

“James you know a bit about politics, are these papers of any interest?” Those words were spoken by the hero of this story and one of my colleagues, Ross MacKay.

Earlier this year, Ross came across a bundle of papers that were part of an executry that my firm was dealing with. The papers belonged to Francis (known as Frank) Cameron Yeaman.

I spent the next five hours going through these papers. They covered the period from the mid-1930s to 1947.

Frank was a Scottish nationalist. That in itself is not unusual; what is unusual is that Frank was a nationalist in the 1930s and around the time when the Scottish National Party (SNP) was formed. More importantly, Frank kept just about everything. There are menus from the various sports dinners he attended at Edinburgh University, letters sent to SNP party members and to newspapers, election flyers, pamphlets urging the Scottish people to support the SNP on various issues, newsletters of the Edinburgh branch of the SNP, minutes of the SNP National Council and minutes of the SNP National Executive.

There is also correspondence from F Marian McNeill, already the author of The Scots Kitchen, and later The Scots Cellar and a popular four volume work on Scottish folklore, The Silver Bough. She recorded the involvement of one C M Grieve (Hugh MacDiarmid) who spoke on her behalf at a candidates’ meeting when she stood for a municipal seat in Liberton. “Unfortunately,” she lamented, “he had ‘a drappie in his e’e’ and began his speech with the words, ‘I am a Communist, and a member of the Communist Party of Great Britain’; ich, (sic) I was afterwards told, cost me at least two hundred votes.”

Frank also took his letter writing seriously. He sent many, including five pages to the Evening Dispatch in April 1935 on “Nationalism and Internationalism: Complimentary not Antagonistic Forces”; four pages to the Scotsman in July 1938 on “Scottish National Party and Empire Development”; another four pages to the Scotsman a month later on “Scotland and Nationhood”. All the letters are in longhand and signed with a flourish “F.C. Yeaman” or “F. Cameron Yeaman”.

Frank himself was a candidate in the “Khaki” election of 1945, standing in Edinburgh East. Frank died before the 2007 Scottish elections – and therefore did not live to see the SNP Government, or the party’s success in Edinburgh East and Musselburgh, its first Edinburgh seat.

The next day I called the National Library of Scotland. Dr Maria Castrillo takes up the story:

When James Aitken approached the Library in January this year to let us know that he had come across the papers of an early Scottish nationalist, I immediately arranged a visit to his legal practice to evaluate the range and content of the material. It rapidly became clear that Frank Yeaman’s archive would be a very valuable addition to the existing political collections relating to the Scottish National Party and particularly to its early days.

The advantage of the personal papers of politicians over the organisational records of a political party is that they provide a unique insight into the internal workings of politics. They are generally better preserved and document areas of political activity which are not reflected in the official records.

Since the foundation of the National Library of Scotland in 1925, the manuscripts department has been acquiring archives and manuscripts of national importance which reflect Scotland’s and the Scots’ contribution to culture and human civilization in a wide range of areas, including politics and the trade union movement. The Library is often approached by owners or their legal agents with an offer to donate, deposit, bequeath or sell manuscript material. Sometimes, individual curators become aware of a potentially desirable collection of manuscripts, in which case they make a tentative approach to the owner or their legal representative. In both cases, the material is assessed and examined prior to acquisition to determine its suitability and prominence.

As a curator of modern political collections in the Library, one of my main responsibilities is to ensure the preservation of and access to Scotland’s political heritage. Capturing the records of politics and raising awareness about their historical and evidential value is vital to enable present and future generations of researchers and learners to become aware of democratic values, citizenship and the shaping of political opinion.

History in your hands

So, why are we writing about this? Simple: take care when you are looking through someone’s papers. It may be that you have in your hands part of Scotland’s history. If in doubt as to a document’s importance, please contact the National Library of Scotland: (0131) 623 3700 or check the contacts page at www.nls.uk . 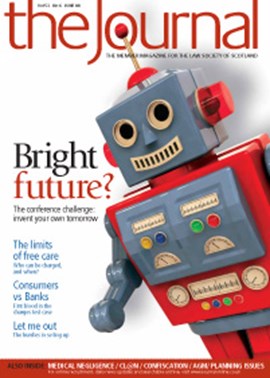