Jack to the future

Interview with the Society's new Chief Executive Lorna Jack, who is set to give the Society, and the profession, a new image and new direction
16th February 2009 | Peter Nicholson

What the sober-suited Presidents of the early days, their photographs staring down from a wall in the Drumsheugh Gardens offices, would have made of it is anyone’s guess, but the arrival of Lorna Jack as Chief Executive of the Society over which they once presided may be the clearest signal yet of the changes at work in the legal profession.

A chartered accountant whose management roles in 18 years with Scottish Enterprise have given her a wealth of business experience and a network of personal contacts well beyond the Society’s normal spheres of influence, Ms Jack looks set to accelerate the progress of the Society as a more dynamic, outward looking body as it enters its seventh decade. That at least was your editor’s impression following our interview.

But what made someone used to business travel spanning the Atlantic Ocean and the North American continent, choose to take the reins of an organisation more familiar with the smaller world of Edinburgh’s corridors of power?

A feeling that it was time for a change, combined with a fascination with the opportunity, is the answer. “I absolutely loved living in the US; the job was very interesting”, she admits. “You’re playing for your country; you’re out to win business. But I was getting to the point where I was thinking this is becoming the same, and if you’re not fresh and with lots of new ideas to apply then the time is right to move on. And the opportunity that the Society presented was just very intriguing. I always knew I would come back to Scotland and it was just a great time to come into the profession.”

Practitioners faced with the seismic effects of the recession and the opening up of the legal services market, might wonder at this outlook, but for Lorna Jack, change equals opportunity. Referring to the current Government consultation ahead of the Legal Services Bill, she states: “One of my key messages to the profession is to get involved again at this stage – now is the moment for our voice to be heard. Personally I’m looking at it as a positive, not least because of the economic conditions. What a different environment the opportunity to have alternative business structures might have presented if they had been around as we go through the bad times. Whether you want to take this option or not that’s something we should reflect on.”

Change is something the Society is already grappling with, through its governance review (the functions and makeup of Council), and more fundamental issues raised by the consultation (see this month’s lead article). One suspects that its new chief will offer a considerable helping push. “That’s an issue I’ve been involved in already and will continue to be, and that’s a positive, helping ourselves to deal with whatever comes out of the bill, but also improving our governance arrangements constantly – an organisation should do that naturally.”

If the Society finds its head has a different way of looking at things, equally Jack accepts that she is on a learning curve and respects the profession. Any sceptics regarding her appointment will however find her already some way up that. “I realise already in the short time I’ve been here, that I’m surrounded by people who understand the law. I’m not the kind of person who won’t ask, and there are some phenomenal colleagues inside the Society who can help me and a Council that’s populated with lots of people who understand different parts of the law. I’m also discovering, going round to introduce myself, a huge number of stakeholders who have got our interests at heart too and want to help.” Already she has met Crown Office, Government and the Lord President as well as a number of legal firms.

“The new network – yes, I’m adding to it, and I think part of my role is to get active and ensure we’re heading in the right direction and where we need support we’re asking for it.”

Speaking of networking, Jack brings with her a ready made collection of links with the business and civic community which should also provide valuable feedback to the Society on how they think the profession should evolve. To help the profession see themselves as others see them? “Definitely a bit of that, I would think.”

There could be other benefits. Asked if she sees it as part of her role to enhance the business skills that legal firms are often said to lack, she responds that the Society can raise the profile of organisations like Business Gateway within the profession, and vice versa. “The infrastructure is there – we don’t have to reinvent it.”

And what about the particular challenges posed by the recession? Though it is suddenly dominating the agenda, she stresses it has not put her off the job; indeed it was not a total surprise to someone who was in the US when the first of the dominoes began to fall there. “In a job like this there will always be something that comes along… you have to be ready to deal with anything.” Although people tend to look at the short term, she adds, there still has to be a focus on long term issues like the bill, “and the opportunities that presents”.

Her advice on how legal practices can best survive, not surprisingly, has a business perspective. “They have to try and step back from their client base and look at themselves as a business. Go to HMRC before your tax payments are due, go to your bank manager and so on like anyone else running a business.” Trainees worried about their places can phone the Society and ask if there is anything it can do for them. “The Society doesn’t have a panacea, but it’s in contact with training firms and it may be able to help you find where there are still opportunities.” And as the hardest thing for the Society is assessing the ongoing impact on the profession, to everyone the message is: “We need to know how the situation is really affecting you. We want you to pick up the phone and tell us what your current issues are.”

Can Jack bring anything from her past career that would help? At the time of the last recession, in charge of Scottish Enterprise Forth Valley, she was faced with 13 large scale closures in the space of a few months. Her response was to approach different organisations and set about trying to build new partnerships to support careers and retraining, which resulted in new skills development and careers advisory services. In other words, no promises of a cure, but yes, there are initiatives the Society can take to try and help the situation.

I wonder what are the things she especially notices about the Society as an organisation, coming from the outside. “A great question! What I’ve already spoken about, a huge bank of people that are willing to help; the various hard pressed members of committees that are coming in and working on issues with the Society, so that’s got to be a big positive for us.”

She adds that an early discovery has been the way the profession talks about itself. At one level, she notices, we speak of a single unifying profession, but we then go on about the various constituent parts – large firms, small firms, in-house... Then there is the client/customer terminology: ears prick up at her habit of using “customer”. “And also when I ask who are the Society’s customers, because people are used to talking about our members and the general public. Both of those are customer groupings, and then they’re all customers of each others’ services internally too. Something I’m very used to hearing is always putting the customer at the centre of everything you do, whatever business you’re in, whether retail or large financial services. And I bring some of that in terms of getting people to think, do we have a customer, and is that multiple customers and how do we respond to that.”

Nor is she fazed by coming to such a highly regulated profession as the law. “My professional background is from a regulated profession, so I understand the importance of regulation. And I’ve worked alongside industries that have been regulated, a big part of the success I had in North America was with the financial services sector, so I understand the importance of good quality, cost effective, efficient regulation, and getting the balance right with modern regulation, modern governance, between the cost and the opportunities. The pressure’s on us from the various interest groups that have a stake in regulation, both in the profession and those outside.”

With her experience in the US, I have to find out her view of how Scots in general, and Scots lawyers in particular, are perceived there, given the Society’s oft-stated belief that our international stock is high. She replies that while many Americans tend to have a “Historic Scotland” view of the country, “Business people generally know about our financial institutions, and the legal profession as well. We have a strong reputation for probity, for being canny, for delivering a high quality, trustworthy offering.” And there are always opportunities there, but you need commitment – you can’t dip in and out.

She concludes with a message of hope. “The Society has been going for 60 years and the profession for hundreds of years. It’s very rewarding to see that people are still positive that the future is there. We should always be looking ahead. It will be tough but the profession will come back out of the recession.”

No looking back, no going back. That’s Lorna Jack. 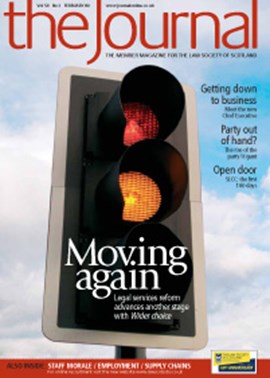