Twenty out of ten

The principal changes made during the passage of the Education (Additional Support for Learning) (Scotland) Bill, which now has some important additional provisions
13th July 2009 | Iain Nisbet

In progressing from stage 1 to stage 3 of its passage through the Scottish Parliament, the Education (Additional Support for Learning) (Scotland) Bill has nearly trebled in size – introducing many new aspects of reform. These amendments have come from the Scottish Government, the Education and Lifelong Learning Committee and from opposition MSPs. The bill has changed from what was a narrow, somewhat technical piece of legislation to one which makes some fundamental changes to education law.

In addition to retaining (in labyrinthine complexity) the proposals for determining jurisdiction for placing request appeals by reference to co-ordinated support plans (CSPs), section 1 of the bill now also provides that any placing request appeal where the specified school is a special school will be heard by the Additional Support Needs Tribunals for Scotland.

The decision of the Court of Session in the case of C v City of Edinburgh Council 2008 SLT 522 threw some doubt over the definition of the term “additional support” by suggesting that it would be restricted to support provided in an “educational context”.

This seemed to conflict with the code of practice, which gave several examples of additional support being provided by external providers – principally health professionals and social work. Section 5A of the bill as passed amends s 1 of the Education (Additional Support for Learning) (Scotland) Act 2004 and effectively reverses this decision by clarifying that additional support includes “provision (whether or not educational provision)” which is required in order for the child or young person to benefit from school education.

Section 5B of the bill as passed introduces a new s 8A to the 2004 Act, which allows a parent or young person to make an assessment request (i.e. a request that the education authority arrange a specific assessment or examination for a child or young person) for the purpose of considering that child or young person’s additional support needs. Currently, assessment requests can only be made in the context of the authority’s consideration of whether a child or young person has additional support needs or requires a CSP. A request made under s 8A must be complied with, unless it is an unreasonable request. It is understood that the Additional Support for Learning Dispute Resolution (Scotland) Regulations 2005 (SSI 2005/501) will be amended to ensure that the refusal of such a request by an authority is a specified matter which may be referred to dispute resolution.

Section 5C further amends s 1 and amends s 6 of the 2004 Act, effectively to introduce a statutory presumption that every child or young person who is “looked after” by the local authority in terms of s 17(6) of the Children (Scotland) Act 1995 has additional support needs. This presumption can be rebutted if a full assessment of the child’s or young person’s needs reveals that they do not require additional support to benefit from school education. Where the presumption holds, the authority must formally determine whether or not the child or young person requires a CSP.

Looked-after children and young people were one of the groups identified by HM Inspectorate of Education (HMIE) as missing out on the benefits of the 2004 Act, and it is to the credit of the Scottish Government and the Scottish Parliament alike that such positive action has been taken to address this shortfall.

Section 5D of the bill amends s 5 of the 2004 Act in relation to pre-school children who are not entitled to free nursery education (broadly, those aged 0 to 3). By removing many of the legislative barriers previously included in this section, the bill will make it easier for those disabled children who require additional support in the very early years to receive it. The local authority will be under a duty to assess such disabled children and, where they have additional support needs, to provide appropriate support for them (unless the parents refuse such support).

Section 5DA introduces a new s 14A to the 2004 Act which requires the Scottish Ministers to secure the provision of an advocacy service for parents and young people in relation to proceedings before the additional support needs tribunals. The bill specifies that the service must be “available on request” and “free of charge”. It is not yet clear what form this advocacy service will take.

Section 5DB requires that mediation services be independent of the local authority, and effectively puts a stop to authorities using “in-house” mediators. This is thought to affect services in Edinburgh and Clackmannanshire only. Section 5DC amends the Scottish Ministers’ regulation-making powers with regard to dispute resolution, such that the initial point of contact for a parent or young person making a reference would be to the Scottish Ministers, rather than directly to the authority.

Sections 5E, 5F, 5G, 5GA and 5GB make sundry amendments to the 2004 Act in relation to the authority’s duty to make certain information available to parents, specifying what, when, how and to whom it must be made available.

References to the tribunal

Section 6 of the bill has been amended since stage 1 to include a new ground for making a reference to the tribunal. A reference will be possible where an authority have failed to provide additional support (or, crucially, arrange for the provision of additional support) as specified in a CSP. In such cases the tribunal will have wide ranging powers to make orders to the authority (with deadlines) to remedy the failure.

Section 6A also introduces a fresh ground for making a reference to the tribunal. A reference will be possible where an authority has failed to comply with its transition duties in relation to pupils due to leave school. Given that HMIE has identified that “Children’s services [are] not effective in helping children to make the transition from child to adult services”, and that the duties apply to all children and young people with additional support needs (not just those with CSPs), we can predict with some confidence that there will be a large number of such Tribunal cases in future years.

In these cases, the tribunal will again have wide ranging powers to make orders to the authority (with deadlines) to remedy the failure. However, some amendment to the tribunal rules may be necessary in order to ensure that such orders retain their efficacy even in cases where the young person has reached (or is about to reach) the age of 18.

Section 7A introduces a para 11A to sched 1 to the 2004 Act, which will give the President of the additional support needs tribunals powers to monitor the implementation of tribunal decisions. Specifically, she is empowered to require the authority in question to provide information on their implementation of the decision and, if not satisfied that an authority is complying with a decision of the tribunal, to refer the matter to the Scottish Ministers. Ministers already have powers in terms of s 27(9) of the 2004 Act to issue directions to an authority.

Section 7AA of the bill will require the Scottish Ministers to report annually to the Scottish Parliament for the next five years on the sufficiency of information regarding children and young people with additional support need for the purposes of monitoring the implementation of the 2004 Act.

Section 7AB requires the ministers to collect from education authorities and subsequently publish the following data:

(a) the number of children and young persons for whose school education an authority is responsible having additional support needs,

(b) the principal factors giving rise to the additional support needs of those children and young persons,

(c) the types of support provided to those children and young persons, and

(d) the cost of providing that support.

As can clearly be seen, the bill has changed quite significantly and now imposes some testing new duties on both education authorities and the Scottish Ministers. The Additional Support Needs Tribunals for Scotland had a quiet year last year. However, with an expanded jurisdiction and new powers, next year could be busier than ever before.

At the time of writing, it is understood that a consultation on amendments to the regulations and code of practice will take place in the autumn of this year, with a view to the bill coming into force at the end of 2009 or beginning of 2010.

Iain Nisbet is a partner at the Govan Law Centre and head of its Education Law Unit.
Govan Law Centre’s dedicated website on the law relating to additional support needs can be found at www.additionalsupportneeds.org.uk 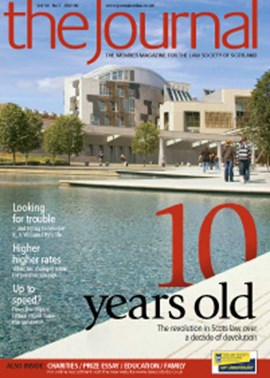