Ahead of the game

With or without legislative reform, some solicitors, and others in the market, are already offering different service models which they see as the way ahead
14th September 2009 | Craig Watson

Finally, hesitantly, signs of recovery from global recession are emerging. Just last month, Germany and France announced positive economic growth. And while the UK and Scottish economies continue to lag behind, some indicators are positive in relation to consumer and business optimism.

The news will no doubt come as some relief to hard-pressed law firms, though many reports still urge caution. Across the profession, tough decisions have been taken to weather the storm. With reforms to the legal services marketplace now due to be introduced, the need to innovate will be increasingly critical to future success as economic recovery gathers pace.

Malcolm Mackay, who set up Edinburgh-based Law At Work after Mackay Simon WS merged with Maclay Murray & Spens in 2001, is among those prepared to divert from traditional business models. He offers a simple message to others considering a new venture: “Rewrite the rules.”

He explains: “There are statutory and professional requirements which must be preserved and observed. The high standards expected of lawyers should remain in new structures, as should professional values. Beyond that, focus on your clients and their needs rather than yourselves and the transactions you want. The change that is going on is profound and constant.”

Mackay established Law At Work as a legal services company – rather than a law firm – helping clients identify, manage, reduce and eliminate risk to their businesses in the fields of employment law, human resources, and health and safety. Run by a board with non-executive directors, it provides a 24-hour service 365 days of the year, operating with fixed prices rather than hourly billing, and is now developing an international presence

He says: “I set out to achieve a complete alignment of the interests of the clients and ourselves. We aim to deliver a great service that is easy to use and effective – that creates happy clients. And our lawyers like the environment too – we have freed them from being slaves to hourly billing.”

Mackay stresses that he did not set up Law At Work in anticipation of alternative business structures, which he describes as a “red herring”. “There was nothing to stop me setting up Law At Work several years ago. I think the problem is that lawyers may focus on the legislation and getting it word perfect while the world passes them by. The opportunities are there now and competitors will take them. With any new model, you have to be prepared to go your own way and take risks. To me, the fundamentals are lawyer values and standards, attitude to client service, and innovative thinking.”

By contrast, QualitySolicitors.com was founded last year specifically to meet the challenge of a liberalised legal services marketplace, identifying the big banks and supermarkets as a particular threat. The Leicester-based network of more than 100 law firms served notice of its intention to expand in Scotland by accepting Glasgow-based Inksters as its first Scottish member in May.

Under the model (see also Journal, June, 40), firms retain their name and independence while practising under the umbrella brand of QualitySolicitors.com, which operates a web and hotline service to match clients with member firms. Developing brand recognition, they stress, is vital to the success of the model, particularly as household names such as the Co-op and Halifax expand into legal services.

Steve Coyle, Head of Which? Legal Service, takes up the theme. “High street firms have a major unique selling point in terms of their locality. But a big disadvantage for law firms is they don’t have the branding of an organisation like Which?”

To compete with the kind of telephone legal advice service provided by Which? – handling mostly consumer law, but also employment disputes and other small claims – solicitors would need to undertake massive marketing campaigns and attract the volume of cases that allows prices to be kept down, Coyle says. In terms of offering what amounts to legal insurance, he adds: “I couldn’t really see law firms doing it.”

But that does not mean he expects the profession to do nothing. “It’s going to be a really interesting time for the profession. It’s a shame in a way that it will probably hit the high street solicitors’ practices, but it will give consumers greater access to the law. Traditional firms are going to have to look at price and ease of access.”

Despite the recession, the number of subscribers to Which? Legal Service continues to increase, by 10% to 44,600 (1,780 in Scotland) in the year from June 2008. And it may expand in Scotland in the future. “We are currently looking at the way we should be structured, as I am sure everyone in the legal profession is. We haven’t announced any plans, but we may want to do more than we currently do.”

Key figures in the recession-hit property sector are also looking to the introduction of ABS as an opportunity for future growth. Former DLA Piper and Maclay Murray & Spens solicitor Robert Carroll set up MOV8 Real Estate in September 2007 out of a belief that neither the solicitor nor estate agency model provided the best service to the property-buying and selling public.

“We had an eye on ABS when we initially set up as a limited company, rather than an LLP. We want to be able to provide incentives for key members of staff by making them directors or shareholders and possibly raising some investment. I would jump at the chance of taking on a co-owner – maybe a business or IT developer – because it would allow me to really push my business to the next level.”

Despite initially experiencing “fairly explosive growth”, the MOV8 model has not been immune from the effects of recession, with a number of self-employed associates forced to look elsewhere for work. But with minimal on-street presence, low overheads and an emphasis on technology – particularly in relation to web-based advertising and client relationship management – Carroll is confident the business can respond.

Reg MacDonald, regional director and owner of leading estate agent RE/MAX Scotland, echoes the positive message. “There has been turmoil among our competitors but we have the flexibility to adapt very quickly to market circumstances. It has been tough since mid-2008 but we have been coming back nicely and are now really in growth mode.”

MacDonald attributes the success of RE/MAX, which now has 72 offices in Scotland, to a franchise system that attracts ambitious associates and ensures offices tailor their service to local needs.

He says: “There are some real structural issues with our competitors and, in the next 30 years, I would expect there to be 95% franchises here. We want to spearhead the change. The traditional solicitor model itself is outdated and ABS could make a big difference to the marketplace.”

Neil Stevenson, the Society’s Director of Representation and Professional Support, says: “Increasingly, we are seeing innovation in both solicitor-led legal practices and the wider legal services market. All firms must be planning for the future to maintain their position as quality and competitive providers of legal services. Even though ABS will change the regulatory landscape, many creative models are already possible but under-utilised. We hope articles, events, and sharing ideas will promote thinking on the future shape of the profession.” 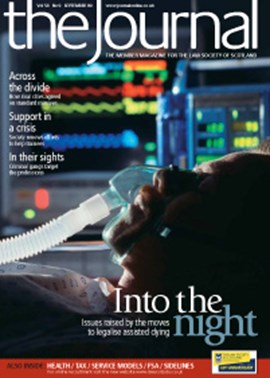