Two by two, by two

Argument that full marriage rights should be extended to same-sex couples, and that there are no technical legal difficulties in the way of achieving this in Scotland
18th October 2010 | Kenneth Norrie

The trouble with gay and lesbian people is that they are never satisfied. Give them a crumb and they want a slice of bread. Give them a slice of bread and they want a full meal. Give them a full meal and they want to eat it at your table. Let them sit at your table and they want the same thing as you are having. In family law terms, the Civil Partnership Act 2004 is (more or less) the full meal, so why should the LGBT community want the same menu as non-LGBT people? The simple answer, equality of choice and opportunity, and of respect, makes the opening of marriage to same-sex couples difficult to resist, at least in a secular society with a rationalist legal system. But how easy would it be to achieve, technically, in Scots law?

At home, the issue might well gain political currency in these days of coalition Government. It is not currently Conservative Party policy to hug a homosexual, but the Liberal Democrats, perhaps in an attempt to show that they remain distinct from their partners, may well push the issue. The Scottish Liberal Democrats at their spring 2010 conference adopted the policy that both marriage and civil partnership should be open to all couples, whatever their gender mix, and in September 2010 the same policy was adopted by the UK party conference. The new UK Labour leader, Ed Miliband, supports equal marriage rights irrespective of gender mix (as, indeed, did all his rivals for the leadership). The matter is on the political agenda both in Scotland and UK-wide.

In Schalk and Kopf v Austria, 25 June 2010, the European Court of Human Rights rejected a claim that the failure by a state to allow a same-sex couple to marry amounted to a violation of the article 12 right to marry. But the decision was more progressive than that formal holding suggests.

First, the court finally gave long-overdue recognition that gay men and lesbians could rely on the "family life" aspect of article 8 as well as "private life", to which they had previously been restricted. Public relationships are now as protected as private activities. Secondly, the court held that article 12 taken with article 14 requires states that do allow same-sex marriage to treat same-sex married couples in the same way as opposite-sex married couples - unless there are strong justifications for distinguishing the two. And thirdly, the court explicitly contemplated the time when a European consensus would emerge on the issue of same-sex marriage - at which point the court might well require states that limit marriage to opposite-sex couples to remove that limitation.

Cases are pending alleging a violation of articles 8 and 14 from countries which have no institutional means at all for same-sex couples to be recognised, or (like France) where the recognition is very much more limited than the recognition, through marriage, of opposite-sex couples. At the European Court of Justice, the Advocate General opined on 15 July 2010 that throughout the European Union, same-sex couples should have means of accessing all the employment benefits available to married couples: R√∂mer v City of Hamburg (C-147/08).

How can it be done in Scotland?

Countries that have already opened marriage to same-sex couples did not find it particularly difficult to do so in technical terms, and it is unlikely to be any more problematic here. Various amendments would be required to the Marriage (Scotland) Act 1977, most obviously the repeal of s 5(4)(e), under which the fact that the parties are of the same sex constitutes an impediment to marriage. However, in order to avoid the argument that the removal of the statutory impediment does not in itself remove the underlying common law impediment, there would probably need to be some positive statement for the avoidance of doubt. This could be achieved by adding into the interpretation section words like the following: "'Marriage' includes a marriage or purported marriage between two persons of the same sex." Using "includes"instead of "means" maintains the common law definition of marriage and simply extends Scots law's understanding of the concept.

The 1977 Act governs how to get married, but most of the actual consequences of marriage are contained in other statutes, which would also need amending. It would be possible to follow the time-consuming approach adopted with the Civil Partnership Act, which was to amend (or replicate) every single one of the statutory provisions that referred to marriage to make them gender neutral, but far easier would be to utilise a statutory deeming provision along the lines of: "The legal consequences of a marriage involving a couple who are of different sexes, whether these consequences are provided under statute or in any other way, apply, with such changes as may be required by the context, to a marriage involving a couple who are of the same sex and the terms marriage", "spouse‚", "husband", "wife" and cognate expressions shall be interpreted accordingly."

Adultery was deliberately withheld as a ground for dissolution in the Civil Partnership Act. The present definition is penile penetration of the vagina and Parliament baulked at the thought of wording a homosexual equivalent. The official line was that a civil partner whose spouse had had (homo)sexual relations outwith civil partnership could utilise the "unreasonable behaviour" ground, though, of course, that argument applies equally to married couples and suggests that adultery is irrelevant today. (That argument was rejected as recently as 2006 by the Scottish Parliament, which rejected the opportunity in the Family Law (Scotland) Act 2006 to abolish adultery at the same time as it abolished desertion as a ground for both divorce of marriage and dissolution of civil partnership). This means that if marriage were extended to same-sex couples, the political choice would have to be made whether adultery as a ground for divorce should continue to be limited to opposite-sex couples.

In (my) order of preference, the choices would be the following. First, abolish adultery for all married couples (retaining, of course, unreasonable behaviour). Secondly, exempt same-sex couples from the benefits/disadvantages of adultery even if they are married, for the same reasons as they are exempted when in civil partnership. Thirdly, extend adultery so that it is broader than its existing specifically heterosexual meaning (rather in the same way that the heterosexualised definition of rape was extended in the Sexual Offences (Scotland) Act 2009). Fourthly, make no change to the law of adultery at all, retaining heterosexual activity as a ground for immediate divorce for everyone.

Many of the most important consequences of marriage, including taxation, social security and immigration are, of course, reserved to the United Kingdom. If Scotland goes alone on the issue, the Equality Network has made the sensible suggestion that all marriages in Scotland involving same-sex couples be treated for UK reserved matters as if they were civil partnerships - just as Canadian, Dutch, Swedish etc marriages are presently treated throughout in the United Kingdom as civil partnerships. Separating state and federal consequences of marriage has not proved an insuperable difficulty for those states in the United States that have opened marriage to same-sex couples.

No conscience exemption is appropriate for registrars who, by dint of their public office, are required to register civil partnerships (Ladele v Islington Borough Council [2010] 1 WLR 955), and for the same reason no exemption would be appropriate to allow them to refuse to be involved in conducting civil marriages. Nevertheless, some churches will fear being required to offer marriage services to same-sex couples.

One means of addressing their concerns would be to limit marriage for same-sex couples to civil ceremonies only, emphasising the essentially secular nature of the institution. This would be unsatisfactory since the secularity of civil partnership did not reconcile opposing religions to its acceptability, and in any case, many same-sex couples are believers and want to walk down an aisle together. To prevent churches that are willing to conduct such marriage ceremonies just because other churches are unwilling is to impose the doctrines of one brand of faith on adherents of another.

In fact, in Scotland, there is no need for a conscience clause since there is no requirement on religious officiants to conduct any ceremony that is contrary to their faith and it would, therefore, be within the discretion of individual ministers or churches as to whether to marry a couple who are of the same sex. In other words, if any religious organisation or individual does not wish to be involved in the creation of marriages between same-sex couples, they need not be so. Their refusal to recognise such a marriage would have as much effect in law as the refusal of some churches to recognise the validity of a marriage involving a divorced person.

A matter of time

Same-sex marriage will come to Scotland and the only question is when. Its introduction will not signal the end of the world, but may well symbolise the final victory in law of the secular over the sacred. It seems to me that a tolerant and respectful society could only benefit from that. 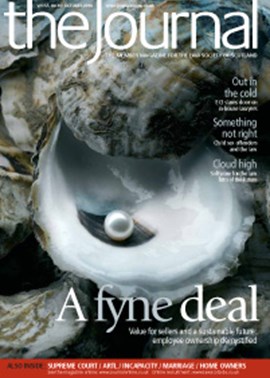