Keeping the law in line

President's message: any review of the criminal law following the Cadder case should be careful to preserve the good points of the Scottish system
15th November 2010 | Jamie Millar

So, a process that began in Turkey, and was later considered by a court with no direct criminal jurisdiction in Scotland, has led to a sea change in criminal procedure north of the border. Observers may well ask: "How so?" And, although there has been consideration of procedural issues in the aftermath of last month's Cadder judgment, a number of other questions have attracted even more attention.

What impact will the judgment have on other cases? What is the cost to the public purse? Will human rights be reinforced or restricted? In introducing emergency legislation, has the Scottish Government acted in haste only to give cause to repent at leisure? Given that some of those questions - and others - remain unanswered, solicitors could be forgiven for experiencing a degree of confusion, and perhaps apprehension, at what lies ahead.

The procedural issue is straightforward enough, even if it may yet prove to have longer-term consequences. Establishment of the right of access to advice from a lawyer while detained as a suspect does indeed have its origins in a Turkish case - that of teenager Yusuf Salduz, who was interviewed by police without a lawyer. And while Turkey is not part of the European Union, it is a member of the Council of Europe and subject to the jurisdiction of the European Court of Human Rights in Strasbourg. In arguing that he suffered a similar injustice to Salduz, another teenager, Peter Cadder, took his case to the UK Supreme Court arguing a breach of his right to a fair trial under the European Convention on Human Rights, as incorporated in the devolution settlement.

The debate about use of this judicial route to hear criminal matters otherwise exclusive to the Scottish courts will no doubt continue, but what other uncertainties do we face in the meantime? In some ways, not as many as might be expected. The judgment itself came as little surprise to the profession and establishes a welcome right of access to a solicitor for suspects facing police interrogation. Also, the interim measures put in place by the Lord Advocate to provide this right have generally worked well, despite some difficulties and the need for robust representations by the Society. Given that the Supreme Court judgment made it clear that only live and future cases are affected - unless the Scottish Criminal Cases Review Commission becomes involved - there is likely to be a short-term increase in appeals, though the overall impact on court business may not be as cataclysmic as some have suggested.

The Society, however, has reservations about aspects of the emergency legislation passed by the Scottish Parliament. While welcoming legal aid for suspects in a police station, we believe that the case has not been made for significant increases in the length of time a suspect can be detained - up from six hours to 24 hours in some cases. This could weaken rather than strengthen a suspect's human rights and appears to be disconnected to the experience of operating the interim advice scheme over the past four months. It is as yet not clear whether children will be treated in the same way as adults. The Society has already raised concerns about protections for children and vulnerable adults. There is also doubt about the suitability of police facilities to hold suspects for such extended periods. At a time of public spending cutbacks, this could involve considerable cost. Surely investment in new technology to allow legal advice to be given more flexibly and cost-effectively would provide better long-term solutions.

The announcement of a review by Lord Carloway offers some comfort that any flaws in the new procedures will be corrected. Considerable responsibility now lies with the police to ensure that the detention of suspects is properly monitored, with full and accurate records kept. The review would be unable to operate effectively without such a commitment. The Society has worked hard with others in the criminal justice system to ensure that changes operate as well as possible. We will continue to do so, while strenuously promoting the rule of law, the public interest and the interests of solicitors and their clients.

The Society has been assured by the Cabinet Secretary for Justice that the legislation which received the Royal Assent on 29 October is a temporary fix, despite the fact that it has no "sunset" clause.

In any review let us not lose sight of those aspects of Scots law which persuaded our own appeal court that the law in Scotland was ECHR compliant, particularly the right to silence and need for corroboration. Those essential protections must be retained and indeed as a jurisdiction we should possibly be suggesting that the fundamental rights that a citizen of Scotland enjoys should be extended throughout Europe by incorporation in the European Convention. 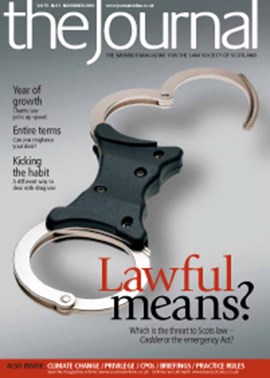