Perhaps it’s the proximity to Burns Night as I write this, but this month the web review has come over all patriotic and turns its attention to all matters to do with clans, tartans and heraldry in Scotland.

The Convention of the Baronage of Scotland

A peculiar name for this website, which gives no indication as to who wrote it or, indeed, why. It is nonetheless a fascinating insight into the history of Scotland. The focus is primarily on the feudal barons through the years, but takes in while telling that story the Declaration of Arbroath; the Acts of Union; the (old) Scottish Parliament; the Baron’s Court (including material by Sir Crispin Agnew of Lochnaw Bt QC) and, ultimately, the effects of the Abolition of Feudal Tenure etc (Scotland) Act 2000, which separated the dignity of barony from the ownership of land.

The website has an unusual navigation system, which is based on images of crowns and gets very confusing. A little work on this would really improve the visitor’s experience. Some of the pages are a little long and could be subdivided, but that’s really nitpicking as what makes this a cracking website is the content, which is an engrossing read and gives a real insight into the evolution of the structures of Scots law over the ages.

The Heraldry Society of Scotland

Ironically, the Heraldry Society is a relatively young organisation, having been formed in 1977. Despite this, its website has amassed an enormous quantity of information.

As you may be aware, heraldry is Scotland is tightly regulated by law. While the site does not cover the legal strictures in any detail, it is quick to chastise the “bucket shop” sale and display of coats of arms and reminds those responsible of the criminal offence they are thus committing.

I was particularly impressed by the “Scots Heraldry” page, which contains a good number of useful articles on the subject. The article entitled “Beginners Heraldry” is, as one might expect, a good place to start. There is a large catalogue of rolls or armorials of arms from Scotland and beyond dating back centuries, and some beautiful artwork.

If all of this has inspired you to look into getting your own coat of arms, then you’re in luck because the site (which, I should mention, is very well designed and attractive – although I did find one or two dead links) has a detailed guide on applying for a grant (or matriculation) of arms.

Court of the Lord Lyon

It is, of course, to the Lord Lyon that one applies for the granting of arms, and the site has an explanation of how to do so – but the Heraldry Society’s version is a more detailed and probably more useful guide on how to go about the process.

As the previous site notes, “The origin of the office of Lord Lyon is shrouded in the mists of history”, but has even so ventured into cyberspace with this functional website, which looks a little dated if perfectly fine and easy to use.

The section on coats of arms is fine, but again there’s more detail better presented on the Heraldry Society’s site. As is noted, the clan and heraldic systems are very closely linked, and the site also describes the process for declaring a clan chieftain or commander, in which the Lord Lyon will adjudicate. However, the section on clans and tartans in general is incomplete and contains, for example, no detail on the Register of Tartans.

This popular genealogy website includes the Public Register of All Arms and Bearings in Scotland, from 1672 up to 1907. Searching the index is free of charge, although there is a fee to view the accompanying image for each entry.

The Scottish Register of Tartans Act 2008 was one of only seven Acts passed by the Scottish Parliament that year and led to the creation of this national repository for tartans, which is administered by the National Archives of Scotland (www.nas.gov.uk).

The site includes the capability to register a tartan online (or at least begin that process) and useful guidance in relation to doing so. One can also search for tartans which have been registered – including a rather fetching Nisbet tartan or two.

The register is not without its controversies, however. Because registration of a tartan is neither compulsory nor especially commercially advantageous (it does not, for example, secure any intellectual property rights), it seems, in the words of the Scottish Tartans Authority (www.tartansauthority.com – also worth a visit), that “each passing day sees the much-heralded SRT inadvertently drifting away from being a national repository of tartan designs to being a national repository of some tartan designs”.

Who writes this column?

All of these links and hundreds more can be found at www.absolvitor.com. Absolvitor is also now on Facebook: http://bit.ly/absolvitor and twitter: twitter.com/absolvitor 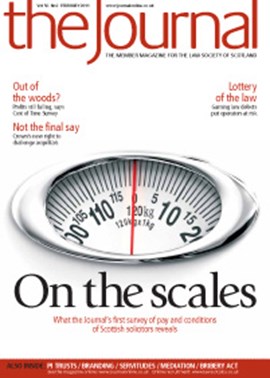