Protecting "protected conversations" with an employee may prove problematic, despite Government moves to legislate in this area
17th September 2012 | David Reid, Gillian Melville

On 19 June 2012, the Government tabled an amendment to the Enterprise and Regulatory Reform Bill to provide that, with some exceptions, an offer made or discussion held with an employee with a view to terminating employment cannot be taken into account in unfair dismissal proceedings.

This amendment is intended to ameliorate what some perceive to be a harsh consequence of the normal rule that an offer of severance terms will not attract “without prejudice” privilege if there is no existing dispute between the parties which the severance offer is intended to settle.

Critical to an informed understanding of this issue is the relationship between the implied duty to maintain the employee’s trust and confidence and the law on constructive unfair dismissal.

Employers often find themselves in situations where they are dissatisfied with an employee for some reason and would wish to terminate the employment relationship. However, in these circumstances, the employer’s reasons for raising the subject of severance can potentially be relied on by the employee as a breach of the employer’s implied duty to maintain the employee’s trust and confidence.

An offer of severance terms will generally be accompanied by some sort of explanation from the employer as to why he or she is dissatisfied with the employee. Giving that explanation without undermining the relationship of trust and confidence between employer and employee is always difficult and sometimes impossible.

Case law makes it clear that all breaches of the implied duty to maintain trust and confidence are material breaches, entitling the employee to resign and claim constructive unfair dismissal. Therefore, the new law is aimed squarely at providing employers with a mechanism to discuss openly the basis for offering severance terms without the employee being able to build a constructive unfair dismissal claim around that discussion.

The “without prejudice” rule has the overriding public policy aim of encouraging parties who are considering initiating legal proceedings to settle their disputes without recourse to court or tribunal. The rationale is that settlement discussions will be better facilitated if parties are able to speak freely, secure in the knowledge that what they say and, in particular, any admissions which they might make to try to settle the matter, may not be used against them should the settlement discussions fail.

The Government wishes to encourage employers and employees to use compromise agreements (soon to be renamed “settlement agreements”) to resolve disputes over the termination of the employment relationship. This, it is argued, will become easier if employers feel more confident to raise the subject of termination on agreed terms with the employee.

Protected conversations, as defined by the amendment to the bill, would appear to obviate the need for there to be a dispute in place before the employer is permitted to have a privileged discussion with an employee about the termination of his or her employment.

The concept of a protected conversation might at first blush suggest that consent is required from the employee for such a conversation to take place. However, the statutory wording implies no such requirement for consent. Therefore, from an employer’s perspective, there is no obvious barrier to calling an employee in for a discussion out of the blue, and proposing to terminate his or her employment. However, the limits of this relaxation of the “without prejudice” rule must be clearly understood.

First, the privilege will only apply in the context of an ordinary unfair dismissal claim (including constructive unfair dismissal). Whilst this is the most obvious claim that the average employee may have on termination of employment, it is far from the only one. If, for example, the employee has claims for discrimination, the employment tribunal will be able to hear evidence about the protected conversation in determining those claims. Also, employment tribunals hearing automatically unfair dismissal claims, on grounds such as trade union membership, will be able to consider the content of what would otherwise have been a protected conversation.

Secondly, the contents of a protected conversation will remain relevant to, and admissible in, the determination of any claim based in contract. An employee bringing a wrongful dismissal claim in court or tribunal will still be able to rely on the protected conversation as evidence of a breach of contract. Indeed, if an employee were to have a breach of contract claim determined in his or her favour prior to the hearing of a separate unfair dismissal claim, it might then be possible for the employee to take advantage of the rule that a tribunal may hear evidence about a protected conversation where a determination has been made in “other proceedings” based on the same evidence.

Further, breaching the implied term of trust and confidence can be damaging for an employer beyond the obvious liability for employment claims. Such a breach could potentially be accepted by a departing employee in order to release him or her from a restrictive covenant or any other post-termination contractual obligations.

Practitioners can therefore expect a rich seam of cases on the extent to which it is permissible for employment tribunals to exclude from evidence issues raised during a protected conversation. Employment tribunals will regularly have to consider how best to balance the protection given to an employer who instigates a protected conversation with the potential prejudice to an employee of being unable to rely on something the employer has said which may be relevant to other claims.

A further area of the new law that appears ripe for litigation is the “improper behaviour” exception to the privilege attaching to protected conversations. The proposed amendment to the bill provides that an employment tribunal may not take into account any offer made or discussions held, before the termination of the employment in question, with a view to it being terminated on terms agreed between the employer and employee, except where anything is said or done which in the tribunal’s opinion was improper, or was connected with improper behaviour.

So what might constitute improper behaviour? The bill is silent on this point. Would a breach of a relevant code of practice be sufficient to constitute improper behaviour, in the same way as it can be used as prima facie evidence to shift the burden of proof in discrimination cases? Or would something rather more oppressive be required to denude the employer of protected conversation privilege?

The critical question for the employment tribunal is where to draw the line between serving the public policy interest that parties to a dispute are encouraged to make genuine attempts to settle it, and wrongly preventing a party to litigation from putting forward their case at its best. In such cases, the bar for admissibility has traditionally been set high in order to protect the “highly beneficial” public policy purposes of the “without prejudice” rule.

It remains to be seen where this line will be drawn. However, given that the public policy consideration of settling a dispute that existed prior to the privileged discussion taking place is to some extent absent from protected conversations, it may be that employment tribunals will be more inclined to put weight on the unfairness to the individual of not being able to rely on evidence arising out of a protected conversation.

It is therefore clear that making comments critical of an employee, or undermining the employee’s trust and confidence in the employer in the context of offering severance terms, remains a risky proposition for an employer. Once the new law is in force, there may be circumstances in which it will be safer for employers to raise the prospect of terminating the employment relationship on agreed terms, but the exceptions to the new rule are substantial and in need of further clarification.

In the form of the now repealed Dispute Resolution Regulations, employment lawyers have recent experience of the problems (and opportunities) that arise when the fundamentals of the employment relationship are disrupted by a statute designed to reduce the level of employment tribunal claims. It remains to be seen whether this new law falls into the same category, but it certainly appears to raise more questions than answers.

The Author
David Reid is a director and Gillian Melville a solicitor with Just Employment Law Ltd, Glasgow
Share this article
Add To Favorites 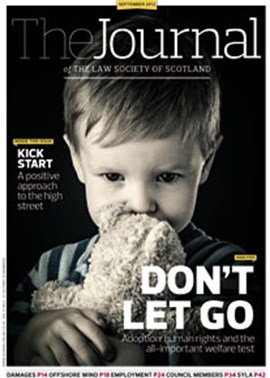