“One of the elements of the broader concept of a fair trial is the principle of equality of arms, which requires each party to be given a reasonable opportunity to present his or her case under conditions that do not place him or her at a substantial disadvantage vis-à-vis his opponent” (SH v Finland (App no 28301/03) [2008] ECHR 28301/03).

Does the Scottish justice system work to ensure that a defendant is working “under conditions that do not place him or her at a substantial disadvantage”? Insofar as the use of forensic experts, the answer is an emphatic no. Let’s examine the facts.

The first point to make is that although many people regard science as objective and impartial, this is very far from the case in much forensic work. Different scientists can arrive at very different conclusions from the same “objective” evidence. Even DNA profiling, claimed by some to be infallible, is not as objective as you may think, especially concerning the question of how DNA came to be on an item (see www.theforensicinstitute.com/Articles/Comment%20on%20DNA%20transfer.htm).

There is a considerable body of scientific research showing how forensic scientists can be unconsciously biased in how they interpret and report supposedly objective scientific results. Although hardly having any impact in the UK, a 2009 report by the US National Academy of Sciences exposed the deficiencies in many forensic “sciences”. We have successfully convinced the Court of Criminal Appeal in England & Wales that at least one “scientific” forensic practice (footmark analysis) is not even scientific (but strangely failed to convince it in another case that “forensic gait analysis”, a practice with even less pedigree, was also not science). So, although a Crown scientific report may appear to be objective and compelling, a second opinion is frequently merited.

The police have access to their own labs, which can be supplemented with almost any expertise (no matter how dodgy the “science”). The police lab staff are the only ones to have the opportunity to examine the evidence in its original form, to decide what and how to test, produce the results, and to discuss with any or all of their colleagues what the results mean. The Scottish police can also engage whatever other expertise they require. In one case the police reputedly spent over £1m to obtain DNA results from an English supplier; the defence experts received about £20,000 (and the accused was found not guilty: value for money?).

Compare that with the defence. Under some pretence of value for money, above a certain threshold (£800) the defence must obtain competitive quotes to ensure that they use the cheapest supplier, no matter the quality of the opinion, the expert, or the science. Rarely will the defence have the opportunity to employ more than one expert for the same issue. Even if the expert works in an environment like ours (The Forensic Institute), where the instructed expert has access to in-house and other international experts, the Scottish system still conspires to seriously constrain the defence expert’s ability to examine the Crown evidence properly.

Value for money used to be the in-fashion public service management mantra, snappily shortened to VfM. “Best value”, which was supposed to take the quality of the service into account, was the replacement buzz term when public services realised what everyone else had recognised decades ago: cheapest is not always, and indeed rarely is best. Unfortunately the Scottish Legal Aid Board, driven by the Scottish Government, still misses the point.

Terms such as “cost effective” and “appropriate”, as used in the Board’s annual report, hide the lack of means of measuring these. It is not even clear whether it is known how much is spent on experts. The Board doesn’t share its definition of cost effective, or how it is, or even could be measured. While a defence expert who does a quick flick through the Crown’s expert opinion may be cheaper, it is hardly effective if they fail to spot a challenge.

The current legal aid system appears to have no need to assess the quality of the expert. It does not recognise the difference between those experts in someone’s address book with no university degree but who now work from home, having worked for the police for decades, and, for example, those with first class honours degrees, wide scientific expertise, access to the scientific literature and published research, access to other colleagues in-house and elsewhere, considerable experience of criminal cases including international cases, a list of publications of their own, and who attend relevant conferences and seminars. Many of these criteria have a cost, and when the main client is legal aid then it is legal aid who must surely, and fairly, meet the cost if equality of arms is to be more than a management mantra. Surely the only person who can determine whether the expert is value for money is the defence solicitor or counsel?

And who will define “appropriate” in the context of criminal justice? Appropriate for what?

It would appear that the police can engage whatever expertise they regard as appropriate, but that degree of “equality of arms” is not available to the legally aided accused. Our recent casework experience shows that that accused must not only satisfy SLAB that scrutiny of the Crown evidence is useful, but that it is the cheapest available.

Before submitting an estimate to solicitors who request an opinion for legally aided work, we routinely ask for copies of the Crown reports so that we can make an informed assessment not only of the likely cost, but of the scientific purpose in providing such assistance. We are well aware of the need in Scotland for the defence solicitor not to fall foul of Anderson, and to ensure that they consult an expert when such is required. We have provided “letters of comfort” in cases where we consider that there would be no reasonable possibility of providing a useful challenge to the Crown evidence.

In some instances, we provide a possible challenge that would not be obvious to the solicitor, who must then, in the interests of providing a comparative quote, divulge the basis of our challenge to another expert who may not have identified such a challenge, or have any experience of mounting one.

Even after we are engaged, the inequalities between prosecution and defence continue: inequalities, indeed, only encountered in Scotland and not in any other jurisdiction worldwide in which we have worked. It is standard practice for the laboratory notes and laboratory case file to be copied to the defence expert to enable a detailed scrutiny of the work done by the Crown. The Scottish Police Services Authority have been stubborn in their resolve not to allow such access for the defence in Scotland, and even use public money to employ their own counsel in defence of their secretiveness ("The case for full discovery of laboratory case files", Journal online, March 2011; and http://netk.net.au/Forensic/Forensic96.asp).

How long will it be before a costly article 6 ECHR challenge will open the floodgates, à la Cadder, to castigate the Scottish justice system, peculiarly unique and peculiarly imbalanced and irrational, to criminal appeals based on what is obvious to other jurisdictions and enshrined in European law?

It is recognised that there isn’t much public, and hence political, support for legal aid. The fact that it is used sometimes to defend the apparently indefensible creates an unfortunate image of public funds being used to “get the guilty off”. That may be so, but there is a phrase in business that “80% of advertising is wasted; the problem is we don’t know which 80%”. Surely, the same is probably true of legal aid: we know that some of it is “wasted”, but there is no real mechanism of knowing how much. That is also why SLAB’s purported claims of cost-effectiveness are hollow.

Of course it is not proposed here that the defence should be given carte blanche to engage whatever expertise they wish. The simple solution is that the defence solicitor should be allowed to state their preferred expert. This expert can be compared on a true like-for-like basis, including qualifications and the actual work to be performed, with another. If the costs are within a specific percentage (say, 20% – most cases are probably between £500 and £1,500, so the actual difference would only be £100 and £300), then the solicitor’s choice will prevail.

Unfortunately, SLAB has no data that would enable this proposal to be costed. In fact, the only data it does appear to have is the cost of everything, but the value of nothing!

Surely the real measure of cost effectiveness, at least for the moment, is that the accused is given the same opportunity as the prosecution to choose their experts. Do we want the best criminal justice system or the cheapest? It is almost certain that the two are mutually incompatible.

May 2020
Search the archive 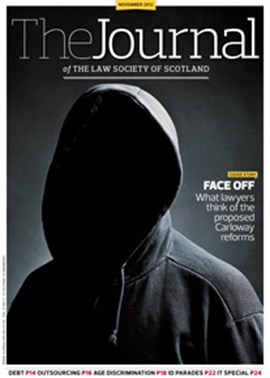