Planning land reform: the land of Scotland and the common good

In 2012, the Scottish Government convened an independent review group to consider matters of land law and policy in Scotland. The remit of the Land Reform Review Group was to explore measures that would enable more people in Scotland to have a stake in land use and management (including via an increased diversity of ownership).

After an evidence gathering process, an interim report (discussed in Combe, “The road to land reform, but where is it going?” (Journal, June 2013, 34)), and a slight reshuffle of membership, the four members of the LRRG (Dr Alison Elliot (chair), Dr John Watt, Ian Cooke and Pip Tabor) published the final report in May 2014, entitled The Land of Scotland and the Common Good.

The report is a striking document, running to 262 pages (including four annexes and 40 maps/tables/illustrations) and – most importantly – 62 recommendations. The LRRG appears to have adopted a fairly broad approach to an already broad remit, and those 62 recommendations contain much of more than tangential relevance to planning lawyers. In fact, the report does not focus on areas that might be more traditionally associated with land reform, instead shining a light on issues relating to the built environment and the urban setting. Those issues will be briefly considered in this note.

Of the content that will most interest planners (Section 8 – Compulsory Purchase), the report notes that “there is a clear need to update Scotland’s system of compulsory purchase”, before recommending “that the Scottish Government should take forward the modernisation and reform of Scotland’s compulsory purchase legislation”. It further recommends “that the Scottish Government and local authorities should have a right to register a statutory right of pre-emption over land, where that is in the public interest”.

There is also a suggestion that local communities should have greater rights to land (Part 4 of the report), which suggestion links to the recently introduced Community Empowerment (Scotland) Bill. Part of that process will involve extending the community right to buy in Part 2 of the Land Reform (Scotland) Act 2003, by removing the current limitation of that right to communities with a population of less than 10,000 people. In effect, this will unlock a right of pre-emption (or first refusal) over strategic assets for communities across the whole of Scotland. There is a suggestion that other community rights (such as a right to purchase “public” land or request the implementation of a compulsory purchase order) are appropriate.

“Land Development and Housing” is afforded a whole part of the report (Part 5), running to some 30 pages, including a large section on urban renewal. The report identifies “the persistent challenge of vacant and derelict land in urban areas”, and notes that “that further mechanisms are required to address” that issue. That might include a new power to issue a “compulsory sale order” for local authorities. Other measures for a robust housing sector are considered, including the promotion of “self-build” initiatives as part of a healthy mix.

Comprehensive as the review is, it is not legislation. It is not even a commitment to legislation, although indications from the Scottish Government (including the ministerial foreword) seem to indicate an acceptance of the course taken by the LRRG. What the report is is a benchmark by which further reforms will be measured, a Plimsoll line that can be inspected if and when legislation is to be launched and when the good ship “Scots Law” is afloat. With the interest that land reform measures seem to generate, it is fair to say there will be plenty of inspectors on hand to assess any finished product shaped by Holyrood.

The Author
Malcolm M Combe, University of Aberdeen (adviser to the LRRG, appointed June 2013)
Share this article
Add To Favorites 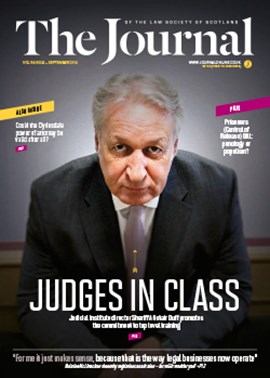