Prior warnings and reasonable belief

Human rights briefing: a provision enacted by the Scottish Parliament has been struck down as not sufficiently focused in relation to the justification advanced for it engaging Convention rights
15th May 2017 | Dominic Scullion

The Supreme Court issued two judgments in April in Scottish appeals, both human rights focused. The first (AB v HM Advocate [2017] UKSC 25) was a challenge to the legality of a provision of the Sexual Offences (Scotland) Act 2009, while the second (McCann v State Hospitals Board for Scotland [2017] UKSC 31) was a challenge to the comprehensive smoking ban at the State Hospital. This short report considers AB.

In 2009, the appellant, aged 14, was charged with two counts of lewd and libidinous practices and one statutory offence of indecent behaviour towards a girl between the ages of 12 and 16. One of the common law charges alleged the showing of online pornographic images to a young boy. Both the other charges involved exposing himself to three girls aged four, 12 and 13.

The charges were reported to the procurator fiscal, but the appellant was not prosecuted. Instead, his case was referred to the children’s reporter who, it is thought, took the matter no further. In July 2015, the appellant, then aged 19, appeared on petition having been charged with engaging in (consensual) sexual intercourse with a girl aged 14. The appellant did not deny intercourse, but sought to rely on the defence at s 39(1)(a) of the 2009 Act that he reasonably believed the girl was 16 years old. Section 39(2)(a)(i), however, prevents this defence being relied on if the accused has previously been charged by the police with a “relevant sexual offence”.

At Glasgow Sheriff Court, a compatibility issue was referred to the High Court under s 288ZB of the Criminal Procedure (Scotland) Act 1995. Sheriff Kerr asked whether article 8 of the ECHR was engaged by the prohibition against utilising the reasonable belief defence and, if so, whether the interference was compatible with the appellant’s article 8 right; whether the lack of a mechanism to challenge the validity of the police charge would result in his trial being unfair under article 6; and whether the prohibition applied when the police charged a child and the Lord Advocate did not instruct a prosecution. The Criminal Appeal Court (the Lord Justice General, Lady Dorrian and Lord Bracadale) rejected the compatibility issue but granted leave to appeal to the Supreme Court.

In the Supreme Court

The Supreme Court allowed the appeal in separate but concurring judgments by Lords Hodge and Reed. Like the High Court, it rejected the article 6 argument, since s 39(2)(a)(i) did not concern procedural fairness at trial; however, it held that article 8 was engaged. Whilst s 39(2)(a)(i) was made “in accordance with the law” and was “necessary for the prevention of... crime, for the protection of health or morals, or for the protection of the rights... of others”, the court held that using prior police charges to exclude the reasonable belief defence amounted to a disproportionate interference with the appellant’s article 8 rights.

The policy memorandum which accompanied the 2009 Act at bill stage explained that the justification for the provision was to prevent the defence from being exploited by serial sexual predators. However, before the Supreme Court, the Lord Advocate instead put forward the argument that a charge by police gave the person charged an “official warning” to be careful not to engage in sexual activity with another person who was not yet 16. However, as Lord Reed noted, “relevant sexual offences” include almost all sexual offences against children under 16, including those of strict liability against a child under 13, and sexual assault or rape of a child under 16. Considering AB’s position, the offences he was charged with at 14 had not involved consensual sexual activity with an older child.

Lord Reed asked: “On what basis could it be said that his being charged with offences of these kinds alerted him to the importance of ensuring that an older person who was willing to engage in consensual sexual behaviour with him was over the age of consent?” (para 63). While the court observed that a warning by a police officer that sexual activity with older children was a criminal offence could, in principle, form a basis for the exclusion of the defence, the problem was that there did not appear to have been such a warning in this case. T­he court therefore found s 39(2)(a)(i) to be outwith the legislative competence of the Scottish Parliament (and therefore not law), and remitted the case to the High Court.

Apart from the interest sparked by any case in which a legislative provision is ruled to be outwith the Scottish Parliament’s legislative competence, it is the different “justifications” for the provision which have been advanced over time (together with the history of the defence itself) which make this a particularly interesting read. For those wanting to go further, the submissions of the intervener (CLAN Childlaw), which focus on the impact of the defence on the welfare of children in AB’s position, are available to download from its website. 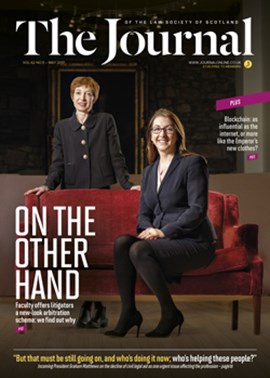