Conciliation is key to the new system. Every service complaint received by the Society will be referred to the solicitors concerned for resolution where possible.  Many firms have followed the Society’s recommendation to have a Client Relations Partner and find that working with the solicitor and the client to resolve concerns, particularly about service, contributes to good practice management and client relations.  Last year the Society received over 1600 complaints of which over 75% concerned service and were suitable for conciliation.

The Society encourages conciliation but any unnecessary delay can lead to the deterioration of an already difficult situation. To combat this, the new system promotes conciliation within a time limit before automatic progression to investigation.  This should create a focus on conciliation and the resolution of concerns, minimise delay and ensure formal investigation of complaints as quickly as practicable.

From 1st September, solicitors will be asked to intimate to the Client Relations Office within 21 days of receiving a complaint either that the matter has been resolved or that there are the steps in hand to resolve it. Once the client has confirmed the resolution of their concerns, the Society will close the file but could reopen it if any agreement is not fulfilled.

The new system changes the procedures for written investigation. In future, if conciliation is unsuccessful or if there is an allegation of professional misconduct in a complaint, a Society Case Manager will inform the firm that the complaint is being investigated and ask the complainer for a response on the issues for investigation within 14 days. If there is no response, the complaint will be treated as abandoned and the file closed.

The Society’s Case Manager will then intimate the complaint to the solicitors requiring a response on the issues identified within 21 days. For many solicitors a 14-day response period was too short if files had to be retrieved from storage or if a solicitor had left the firm.  While extensions were regularly permitted to the 14-day period in the past, an extension to a 21-day limit will only be granted in exceptional circumstances. This should assist the resolution of complaints as quickly as possible and maintain the integrity of the procedure.

After 21 days have elapsed, the Society will seek a response and an explanation for any delay under S15 and/or S42C of the Solicitors (Scotland) Act 1980. Failure to respond to a notice may result in a separate complaint.

The Case Manager will forward the solicitor’s response to the complainer for information and at the same time ask a Reporter for a report on the complaint.

Reporters are either solicitors or lay people who are appointed by the Society to consider complaints and report to the Society.  Reports are requested within 30 days (although complex cases may take longer to allow full consideration of the complaint). Each report outlines the facts and circumstances of the complaint, gives the Reporter’s opinion and recommendations and raises any other relevant issues. From 1st September 2003, Reporters will be paid £100 per report rather than working on a voluntary, unpaid basis which the Society believes is no longer appropriate - a view also stated by the Justice 1 Committee.

The Case Manager will send the report to both the complainer and the solicitor inviting a response. In service cases, if the parties accept the report’s recommendations the complaint will conclude on the implementation of the recommendations. Failure to implement the agreement could instigate a fresh complaint.

The Council of the Law Society of Scotland Act 2003 has paved the way for Client Relations Committees to decide all service complaints using the Reporter’s report and any written representations from the parties.

The Professional Conduct Committee will review all recommendations from the Client Relations Committees on professional misconduct.  The Committee which will have an equal number of solicitor and lay members can: pass the papers to a Society appointed Fiscal for prosecution before the Scottish Solicitors Discipline Tribunal; place a note on the solicitors’ record for five years that the conduct could have amounted to professional misconduct; dismiss the complaint outright or dismiss the complaint but find that solicitor’s conduct was unsatisfactory.

The Society believes that after an initial settling-in period, the target to conclude 90% of complaints within nine months from intimation is achievable. The shorter timescale should benefit solicitors, clients and the Society and ensure that the issues are carefully and fully addressed. The target timescale was recommended by the Scottish Legal Services Ombudsman last year’s annual report and meets the Society’s undertakings to the Justice 1 Committee.

The new system will be monitored before being reviewed in 2004. Comments about the operation of the new system are welcome and should be sent to the Director of Client Relations.

This article, the flowchart and last month’s letter from the President to all members aims to provide a guide to the new system. For more information please contact the Client Relations Office. 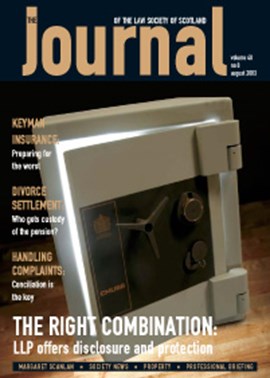