Shape of the future

The Society's working party on the future of conveyancing was set up a year ago, and recently surveyed practitioners' opinions on priorities for action. What has it achieved to date?
18th August 2014 | Ross Mackay

What stage has the working party reached?

We have had quite a number of topics under discussion, some of which are well advanced. It’s fair to say that what members were looking for in the questionnaire was standard missives, standardised documentation, and increasing the role and profile of solicitors’ property centres, and these are all things we are working on.

Is a national standard missive in the pipeline, and what will be the benefits?

We identified right away that now is the time to move to a Scottish standard missive. We have a sub-group with representatives from all the current standard missive groups, who are using the Combined Standard Clauses as their basic template, and we’re hopeful that will bear fruit, perhaps by the end of the year if that’s not too optimistic.

Standard missives have already hugely enhanced the conveyancing process. If one strips out the issues of funding, the process of exchanging missives to conclude a contract is now much more straightforward. It’s much easier to explain to clients what missives are, providing them with the clients’ guide at an early stage. The next thing is a set of national missives, because there are what we may call cross-border transactions where someone from one area is buying in another, and agents may be familiar with their own set but unfamiliar with the local set – things can be missed and it doesn’t assist the process.

Is the real problem not that solicitors are refusing to conclude missives until near the settlement date, for whatever reason?

There is a problem. I think it’s client driven. On the whole you will find that delayed missives are because the seller won’t conclude until they find what they want to buy themselves, or the buyer’s loan isn’t through or their own sale is unconcluded for some reason. It’s regrettable but there’s no doubt that the English chain experience is here in Scotland now.

Having universal standard missives won’t affect that, but the beauty of it is that it will flush out that issue very quickly, in that you now can’t hide behind a five-page qualified acceptance. If there is going to be a delay, that should be identified at an early stage and parties will know where they stand.

Do you see any downsides? Some say that solicitors won’t think properly about individual issues, or that it will open the door to others performing the work.

No. These comments were made when standard missives were first introduced about 10 years ago, and intermittently since then, but it’s never come to pass. At the end of the day, missives aren’t an arcane ritual for lawyers to hide behind, they should be for the benefit of the client, and they can speed up and clarify the process, for the benefit of both solicitors and clients.

What impact will the new “smartcard” practising certificate have?

I’ve been the chair of the working party on the smartcard as well, and there has been a big input from practising property lawyers. That project is in the implementation phase, and the expectation is that criminal practitioners, who have the biggest demand, will have it by the end of this year and then property lawyers should be next in the queue.

We are trying to provide the profession with a virtual document exchange facility, that can be used for missives, titles, and the idea is that in due course clients can access it, and Registers. The Law Society of England & Wales has just announced that it is looking at a similar project.

Also on IT, the Unifi project (www.unifiscotland.com) now has real traction. This is the idea of a central portal combining the records of local authorities, Ordnance Survey, central government, Land Register – basically everyone – so there is a central port for all your searches. Central government is now seriously interested to the extent that it is considering funding a test area to do a pilot project.

Does bringing in other standard documentation fit in here?

We think it’s something that would follow on from the document exchange concept, and it also ties in with future e-registration, ARTL 2 when that comes. We don’t see it as the highest priority but it’s very much on the “to do” list.

Where have you got to in relation to devising a quality badge for conveyancers?

We have explored ideas for accreditation, branding, marketing, and standards for solicitors. What we’re now looking at is effectively a code of conduct for property lawyers, something like you have for criminal lawyers in addition to the general code of conduct for solicitors. The SLCC issued its paper on conveyancing complaints a few months ago, and the code is influenced by that.

We should be able to set out generally what we do in an average residential transaction. For example, you provide a title report for your client; you provide copy missives to your client; you will communicate effectively with your client: it’s pretty basic stuff, but it will be set down in black and white. It won’t be compulsory but it’s something that we envisage solicitors should be happy to sign up to and accept as part of a service level at which they engage with their clients.

The idea is to test it through the conveyancers’ forums initially. We don’t want it to be something from the Society coming down from on high – what we want is a grass roots list of conduct and standards that members can adopt themselves, in the same way as standard missives developed.

Why not an accreditation scheme?

The difficulty with accreditation is that conveyancing is one of the reserved areas. At the moment, any solicitor can basically do conveyancing, if you like – the view was expressed that your badge is your practising certificate and you don’t have to go beyond that. The counter view was that we should be looking at something like the Danish experience where they have formed an Association of Residential Property Lawyers which is badged, branded, and marketed in a serious fashion: they are the recognised professional body for conveyancers. It’s a different system in Denmark, but certainly in terms of branding and marketing it’s a force to be reckoned with. And it’s something we could do here, but maybe it would have to be separate from the Society – something the conveyancers’ forums would pick up.

What developments can you encourage with the property centres?

We believe that the property centre network has to grow and that there is a need for a much greater role for SPC Scotland as a national hub. The Society has invited the chairs and chief executives of all the property centres to a meeting with a view to producing a kind of road map for the development of the network throughout Scotland, to make it easier for a house registered with one property centre to be searched via another and that kind of thing. There are issues of detail, of course, but the basic concept is for the Society to try to support, and do what it can to enhance the development of the network.

Is the working party involved with the 2012 Act changes that are about to happen? What should solicitors be doing at this stage?

That’s really under the aegis of the Property Law Committee. It’s had numerous meetings with Registers, and is working up guidance on various practical issues arising from the 2012 Act.

Solicitors should attend the Keeper’s roadshows in the autumn. These are a comprehensive review of the new practice, which will not be as dramatic as some people think. The profession should be able to adapt very quickly. There will be more technical changes in terms of unusual transactions but, for the average transaction, the paperwork will not be hugely different. Once members have two or three under their belt, they will be much more comfortable with it. The main message is look out for seminars, look out for guidance coming from the Society, and we should have that in time for December.

Are members also looking to change things that are beyond the Society’s control?

That’s right, but we’re at an early stage and we have to focus on things within our control or within our influence, and that’s why we have the list of targets that we are working on. We can’t change the CML Handbook or abolish home reports, though the Society and the Property Law Committee are working on behalf of members there, but we are looking at the conveyancing process.

We had a reasonable return from the questionnaire, and we’re looking now to have individual round table meetings, with local solicitors, Registers, the CML, searchers, the banks, Government, to see what else we should be doing. We invite people to get in touch, and we also want to try and make sure practitioners are kept informed of what is happening.

Is there a contradiction between making the system simpler and/or more efficient, and promoting the importance of good legal advice?

No, they should run in tandem. From the client’s perspective, they want to know that they will get a professional service and professional advice at all times. Partly what we are talking about is redefining the role of the solicitor. As I often say, the use of “conveyancing” is somewhat pejorative now, in the sense that it’s “just” or “only” conveyancing. In the average transaction the conveyancing may be just 5% or 10% of the process. What we do beyond that as part of our service to the client and for which they pay the fees, is the advice, the negotiation, the overall handling of the file – in the modern transaction, we project manage the deal from start to finish. That is all part of the overall package, and that’s what clients will be hoping to achieve from their professional adviser.

So the working party will be busy for a while yet?

It was going to be a one-year remit, which has in fact expired. I think we’ll continue for another year, but I think there is scope, as long as we have lawyers doing property work, for a working party looking at these issues of improvement. The Property Law Committee tends to look at practice, procedure, black letter law, law reform, that side of things; we’re maybe looking at a slightly bigger picture. And it allows us to bring in people from elsewhere – external input is very useful, because we all recognised from day one that there is no divine right for lawyers to do conveyancing, and there are jurisdictions, such as Norway where there are no lawyers involved at all. It’s a completely different system there, but we always have to bear that in mind. 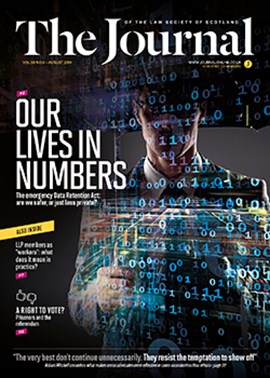